Howard County (MD) Department of Fire and Rescue Services was looking to replace an engine and an aerial platform, and while quality, service, and price were important considerations, safety elements in the new rigs were a big concern for the department.

So after doing its research and due diligence and after multiple demos with four local vendors representing major apparatus manufacturers, Howard County chose E-ONE to build the new vehicles. 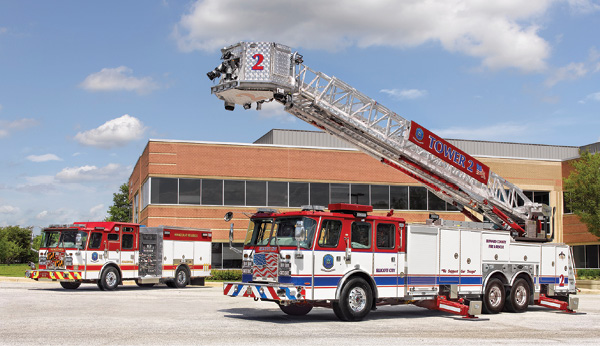 1 Howard County (MD) Department of Fire and Rescue Services went to E-ONE for this 95-Platform aerial, on a Cyclone long cab with seating for five firefighters, and a custom pumper on a Typhoon long cab with a 12-inch vista raised roof. (Photos 1-6 courtesy of E-ONE.)

“In our research, we found E-ONE’s PROTECH Safety System and decided it would be a very good thing for our personnel,” says Martin “Pat” LePore, Howard County battalion chief. “We liked the thoroughness of the entire system, with all its component systems.”

E-ONE’s PROTECH Safety System comes with the OnGuard® collision warning and mitigation system, front and side roll air bags, a G4® electronic stability control system, a CrewGuard™ occupant detection system, and a 360-degree camera system, according to Joe Hedges, E-ONE’s product manager for chassis and aerials. “Howard County had PROTECH Safety Systems installed in both the aerial platform and the custom pumper,” Hedges says, “and they added collision avoidance system backup sensors on the aerial platform.” 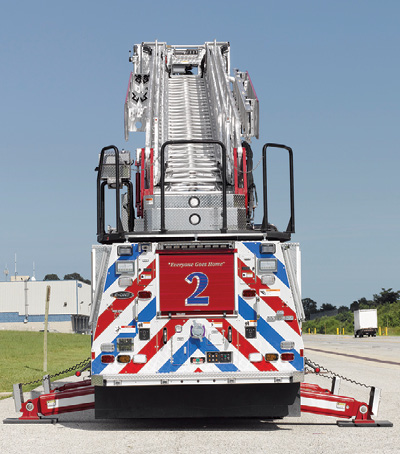 Hedges says the 95-Platform has a welded extruded aluminum aerial that has a 2.5:1 structural safety factor, which he notes is 25 percent higher than the safety factor required of aerials by the National Fire Protection Association (NFPA). “The aerial is rated at 92 feet high,” he notes, “and can carry 750 pounds and three firefighters in the platform dry, or two firefighters and 500 pounds wet.” The platform carries a single Task Force Tips 1,250-gallon-per-minute (gpm) monitor.

3 The platform rig for Howard County is powered by a Cummins 500-hp ISX12 diesel engine and an Allison 4500 EVS automatic transmission.

“The aerial platform has our integral torque box chassis and an extruded aluminum body on a wheelbase of 250 inches, an overall length of 46 feet 3 inches, and an overall height of 11 feet 10 inches,” Hedges says. “The turntable deck is painted with Line-X®, and the aerial ladder is lit by all red Amdor Luma-Bar Pathfinder LED strip lights.” The aerial platform truck is powered by a Cummins 500-horsepower (hp) ISX12 diesel engine and an Allison 4500 EVS automatic transmission. 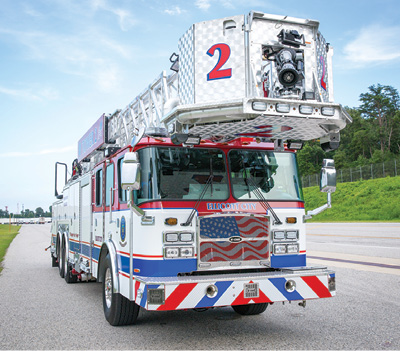 4 The platform on the aerial has a Task Force Tips 1,250-gpm monitor. 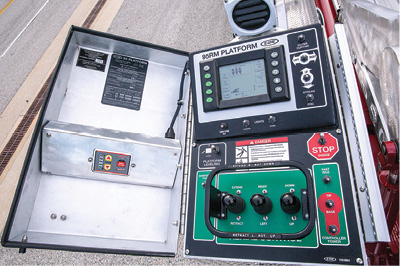 5 The control panel at the pedestal on the Platform-95 for Howard County.

Steve Beavers, president of Patriot Fire LLC, who sold the vehicles to Howard County, points out that the custom pumper has a stainless steel body to protect it from the salt air and the corrosive salts used on Maryland’s roads during the winter. “Because of the salt we get on the roads, the stainless steel body on the pumper was the right fit for them,” Beavers says, “but it wouldn’t work for the aerial platform because of the weight of the stainless steel on so large an apparatus body. We’re not too far from the Atlantic Ocean, being on Chesapeake Bay with its brackish water, so we get salty air, but the corrosive effect of road salt is the worst problem.” 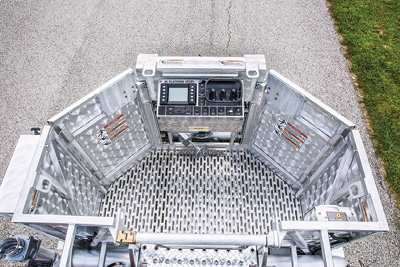 6 The aerial’s platform has 45-degree angled corners, inward swinging doors, and a control panel that matches the one at the turntable.

Uhlhorn notes that the department has an apparatus replacement program that considers engine hours, age, condition, and idle hours on its apparatus. “We have rotated some apparatus from busier stations to slower stations to prolong their lives,” she says. “But in general, we plan for 15 years for a front-line aerial and 10 years for front-line engines and tankers. However, some of them might be replaced sooner if they have too many hours on them or develop troubles that can’t be solved easily.”

LePore points out that the E-ONE custom pumper has a rescue body for compartmentation but is not equipped as a typical rescue-pumper with hydraulic rescue tools. “It’s based at a special operations station, and we had E-ONE build in compartments in the dunnage area above the pump where we could store light items like personal flotation devices and throw bags that are used in water rescue,” LePore says. “Also, we asked our firefighters, and they wanted to keep with engine tradition and have the ground ladders and hard suction mounted on the exterior of the officer’s side of the pumper instead of enclosed or on top in a ladder rack. That means we only have half-height compartments on the curb side of the pumper.”

8 Howard County chose to have E-ONE’s PROTECH Safety System with OnGuard® collision warning and mitigation system installed on its pumper and aerial as well as front and side roll air bags, the G4® electronic stability control system, the CrewGuard™ occupant detection system, and a 360-degree camera system. 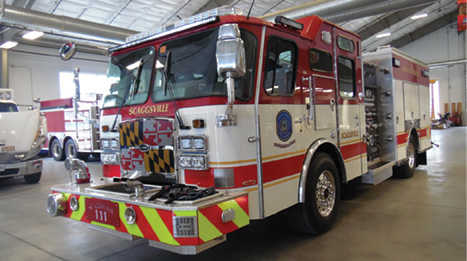 One of the noticeable features of the aerial platform, LePore says, besides the waving American flag emblem on the front of the rig is its red-white-and-blue color scheme. “Our chief, John S. Butler, is a veteran, and the aerial platform is assigned to a station that’s adjacent to a National Guard building and a nearby Veterans of Foreign Wars Post,” LePore points out. “The chief and the rest of us wanted to show support for our troops, both current and past, so the color scheme and flag were our opportunity to do so.”

• 16-foot roof ladder in brackets on base section of aerial

• Two underbody winch receivers, one each side

• Front and side roll air bags

• Front and side roll air bags

Service area: Howard County Department of Fire and Rescue Services provides all hazards response to an area of 253 square miles and responds to an average of 35,000 incidents per year.