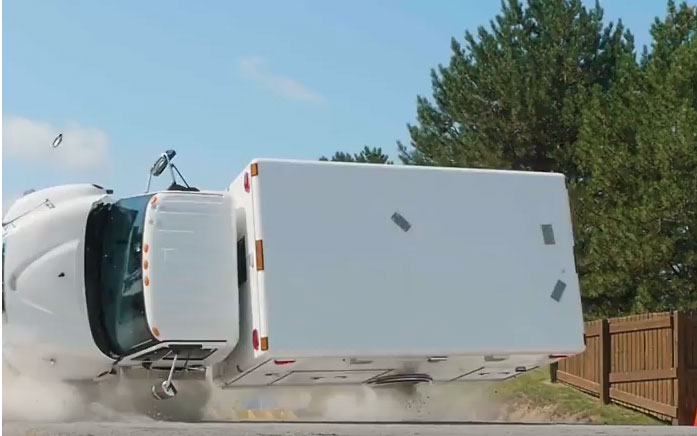 The REV Group’s Horton brand recently participated in a rollover demonstration at IMMI’s headquarters in Westfield, Indiana. Before watching the demonstration, IMMI invited guests to take a tour of its facility.

What I did not realize at all was IMMI’s involvement in heavy-duty vehicle crash testing. IMMI’s CAPE facility is home to the largest known barrier block in the world. It is a 2.2-million pound block used to crash test vehicles like fire apparatus, ambulances, school buses, and more.

After the tour, guests walked out to an area to observe the rollover. According to Lance Randolph, vice president and general manager of Horton Emergency Vehicles, he wasn’t completely sure what to expect, but was pleasantly surprised. He noted that this was a demonstration, not a test, to foster meaningful dialog to drive discussion.

The ambulance held up well, as seen in the video above. The IMMI restraint systems inside the patient area and ambulance cab worked properly. The box remained structurally sound. The chassis used for the demonstration was from 2002, but the box was brand new. This demonstration used a Type 1 ambulance, weighting 10,000 to 11,000 pounds.

Seat Belt Usage
The use of seat belts, or lack of use, has been a topic for many years in the fire service when it comes to firefighter usage on fire apparatus. Through a variety of efforts, some of which IMMI has been involved with (ReadyReach), seat belt usage has increased on fire apparatus. In ambulances though, it has been a different story.

According to Randolph, despite 2,600 injured persons from 4,500 crashes, 84 percent of EMS workers in the box are not wearing seat belts. And, so far this year nine have been killed inside the ambulance. We know the boxes will hold up. The key to surviving a rollover or crash with another vehicle relatively unscathed is to wear the restraint devices engineered to protect EMS workers in the event of an accident.

IMMI and the Fire Service
While at IMMI HQ, I had the opportunity to sit down with Dan Veselsky, managing director, fire and EMS at IMMI to talk about some of the products IMMI offers and IMMI’s place in vehicle crash testing.