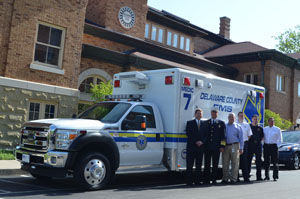 “Completion of our 16,000th vehicle at Horton marks another memorable event in our rich company timeline. As the oldest ambulance manufacturer in the industry, our strong production represents continued dedication to the fire/EMS market. We would not be successful without our customers, and for that we thank them,” says John Slawson, President/CEO of Horton Emergency Vehicles.

The close proximity of the 16,000th vehicle customer was not planned, but a happy coincidence. Dating back to 1978, the relationship began when Delaware County EMS purchased its first Horton ambulance after transitioning into an independent, full-time emergency care agency. The association has continued, with DCEMS running Horton ambulances in its fleet for more than 36 years. All 17 of DCEMS’s front-line ambulances were built by Horton. 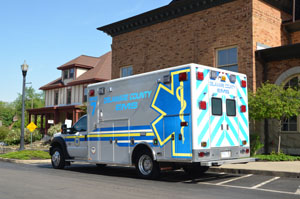 Delaware County EMS Chief Michael Schuiling provides additional insight on DCEMS’s relationship with Horton. “I’ve been in the industry for 21 years. It is my belief that Horton has been both the trendsetter and the voice of reason,” he says. “An unlikely pair, for sure, but many manufacturers offer solutions without any verification. Horton tests everything—and they test it well. Not just load tests, but dynamic crash and rollover simulations. Not just seat belt pull tests, but measurements on the head, neck, and chest of test mannequins. It gives me security knowing that Horton is taking care of my employees.”

Slawson and Mike Olney attended an official proclamation ceremony for the new DCEMS unit. Mike Olney, who sold the 16,000th vehicle to Delaware County EMS, has been with Horton Emergency Vehicles for more than 22 years.

Carl Horton established Horton Emergency Vehicles in 1968, pioneering the transition from hearse-based transport to the first van ambulance. Since then, Horton has become the leader in custom ambulances, providing the best in engineering and safety.

Temple (TX) Fire Apparatus Involved in Crash that Injures One