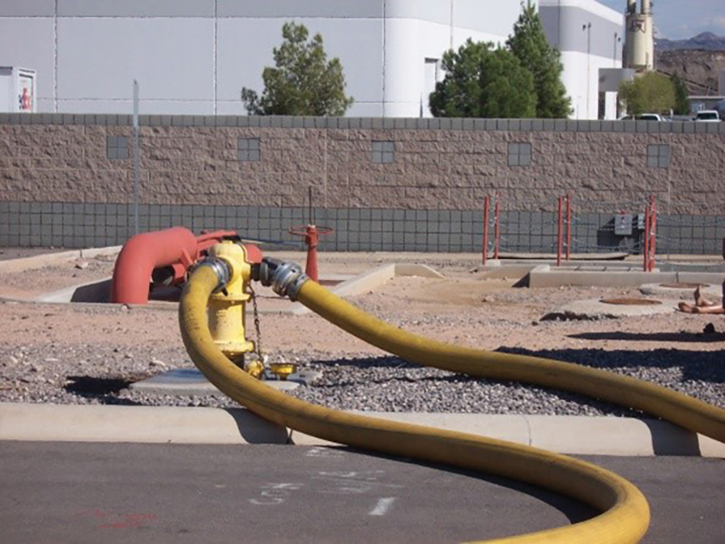 When it comes to using fire hydrants, there have been many methods used regarding supply line operations to obtain a maximum amount of water. Going back to when I first started in the fire service, before 4- and 5-inch large-diameter hose (LDH) was being used, maximizing a hydrant meant several things.

There were a few departments that used 3½-inch line. These were mainly large departments like New York, New York, and Los Angeles City, California. Their most common evolution used forward lays directly off the hydrant. They had the choice of setting up the supply line in a relay pump operation, which was actually done a lot, especially on big fires. Most fire departments had 2½- and 3-inch supply lines as well as a combination of both sizes. For the big water operations, these engines would reverse out to the hydrant with duals and sometimes three and four lines to flow maximum water.

1 Using the 2½-inch hydrant port along with the steamer port only provides approximately 500 more gpm in most cases. (Photos by author.)

Of course, today most fire departments are utilizing 4- and 5-inch LDH, mostly in a forward-lay operation supplied directly from hydrant pressure. For most of the departments that use 4- and 5-inch, this is where the big operation stops. A single line is laid from the hydrant supplied from the hydrant pressure itself. So, why is it that nothing else is done to get more water? Have you ever heard the statements about LDH regarding how wonderful the hose is? Laying LDH is like laying an above-the-ground water main or like taking the hydrant right to the fire. These statements tell firefighters that the single line from hydrant pressure is all that has to be done because of the low friction loss in LDH. I think the statements came about years ago from departments that initially made the switch from small-diameter hose. They saw a significant increase in volume with a single supply line vs. the small-diameter hose that led them to think that there was nothing else that needed to be done. With the majority of fires being house fires requiring flows of 100 to 500 gallons per minute (gpm) to extinguish, LDH definitely made a huge difference. If LDH is the answer in itself, why do we still run out of water at large fires? The answer is simple: We are not using the available water from the hydrant system with our hose evolutions.

This article covers supply line operations that are designed to maximize a hydrant system using LDH. Let’s start off with a scenario with an engine conducting a forward lay from a hydrant to a fire that has the potential of becoming a large-flow operation but hasn’t reached that point yet. A common hydrant hookup operation involves connecting the LDH to the large port, and if the hydrant is dry barrel, placing a 2½-inch gate valve on at least one of the unused 2½-inch ports to leave the option of gaining more water from the hydrant. Now the California and Hawaii folks don’t need to do this because their hydrants are wet barrel. Each port on the hydrant has its own valve that can be opened and closed with the hydrant being charged.

2 The hydrant valve being used with a second supply directly from the hydrant.

When teaching my classes, I always ask firefighters why they are gating off the 2½-inch hydrant port. Their answer is, of course, to get more water if needed. My next question is: How is this water going to be used? This is where the answers vary. Some say it allows a second supply line to be laid to the engine that deployed the first line. Others say that it allows the second engine to make the connection and use the water. And finally, some will say that if they are making a hydrant hookup to set up for a relay, the gate valve allows them to tap into the hydrant with a second line later in the operation. Here’s a little-known fact about available water from the 2½-inch port used after the large port on the hydrant is already flowing water through the supply line: Unless the hydrant being used is extremely powerful, you can expect a flow of approximately 500 gpm from the 2½-inch hydrant port. The following flow tests prove this fact.

In test one, we connected 400 feet of 5-inch to the 2½-inch port on the hydrant and flowed 1,000 gpm. Understand that the reason we got so much water was because we got the full potential of the hydrant in regard to volume and pressure since it was flowing the single line. In test two, we flowed a single 5-inch line 400 feet long off the 4-inch outlet of the hydrant and got expected results of 1,250 gpm. The static pressure of this hydrant was 70 pounds per square inch (psi), and after flowing 1,250 gpm, the residual pressure was 48 psi. This is the standard supply line laid for the majority of departments. In test three, we flowed dual 5-inch supply lines 400 feet long with one connected to the 4-inch port and the other connected to the 2½-inch port. The total flow for this operation was 1,713 gpm. By adding the 2½-inch port, we gained 463 gpm. Again, in test one, we flowed 1,000 gpm with only the 2½-inch being used but using the 4-inch port took away a significant amount of power from the hydrant, thus getting the 463-gpm flow. Yes, 1,713 gpm is a significant amount of water; however, if the engine being used has the ability to flow more water, there is another way to do this. I say lay a second supply line from a second hydrant and push toward doubling the initial supply line flow. Test four proves this by flowing 2,336 gpm.

The following flow tests will show a relay pump operation using one supply line between the source pumper and the attack pumper and one hydrant.

3 Two supply lines, one supplied directly from a hydrant and the other set up in a relay from another hydrant, bringing in more than 2,000 gpm.

The next set of flow tests was also done with 4-inch LDH and was 400 feet long. To establish a base flow, we first ran the supply line directly from the hydrant. No hydrant valve was used in these flow tests. A flow of 1,393 gpm was discharged. We then laid a second supply line from a second hydrant and were able to flow 1,893 gpm. Finally, we set up for a maximum flow using two hydrants that were actually on the same main. The first line was 200 feet long and was supplied directly from the fire hydrant, while the second line was 400 feet long and set up in a relay pump operation. Now we are getting somewhere. We had a total flow of 2,658 gpm. This was a 1,265-gpm gain over the first flow test. Also, even though the second test brought us 1,893 gpm, you can see the power that a relay pump operation has to do a lot more.

I hope you were able to see the advantages of using two hydrants over one with and without a relay pump operation. It’s hard to say always or to put a number on what an average hydrant should flow; however, it has been my experience that with the exception of rare high-powered hydrants, the gain you will see by maximizing a single hydrant by either using a relay pump operation or dual supply lines is far less than if you use two hydrants—one from hydrant pressure and the other from a relay pump operation or just two supply lines used directly from hydrant pressure only. You might be saying to yourself, do we really need that much water? The answer is not cut and dry. However, I can tell you that very efficient 2,000-gpm or greater pump operations from a single engine can be done efficiently both mechanically and strategically. It’s always better to have more water and not need it than it is to need the water and have to go get it.

PAUL SHAPIRO is director of Fire Flow Technology. He is a nationally recognized instructor on large-flow water delivery. He is also a retired engineer from the Las Vegas (NV) Fire Department. He has authored numerous articles for fire trade magazines. He has been in the fire service since 1981, is the author of Layin’ the Big Lines, and produced the first in a series of videos on large-flow water delivery.