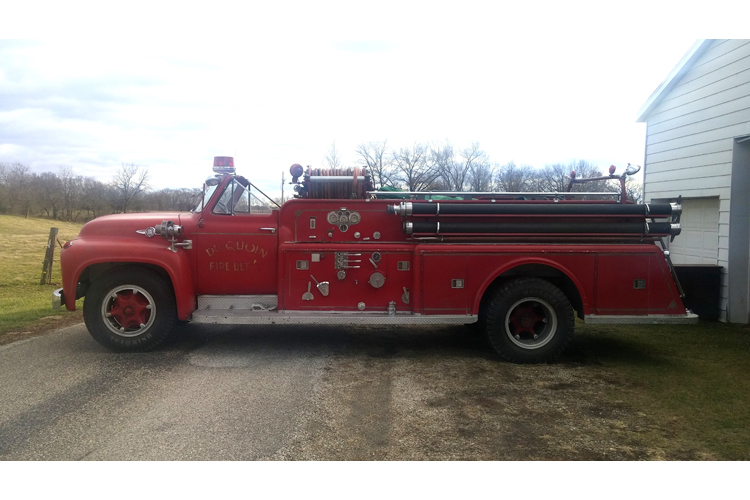 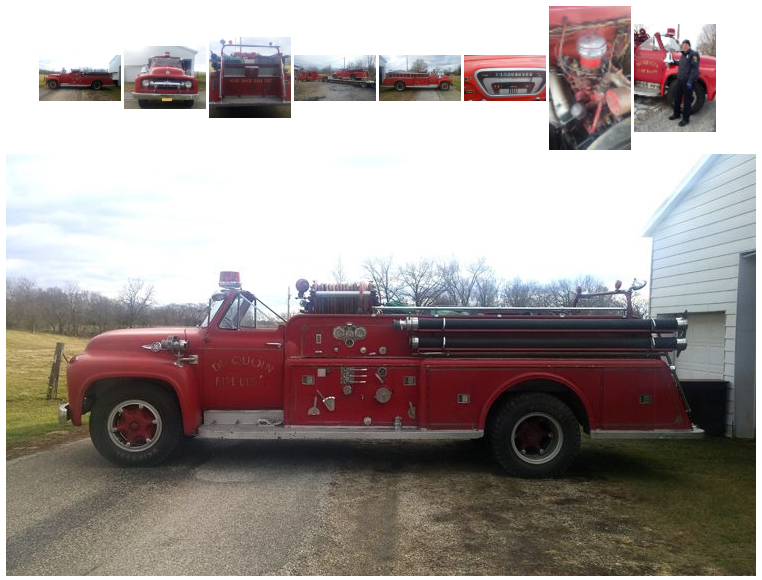 CLICK ABOVE FOR A GALLERY OF THIS 1954 FORD-TOWERS PUMPER >>

When Shannon Clark read John Croesman’s October 2015 feature in the DuQuoin Evening Call on an old fire truck that had served the DuQuoin (IL) Fire Department as being for sale by bid, he knew he had to place a bid and preserve a piece of history that had been a part of his life.

DuQuoin, Illinois, is a community of some 6,600 residents in southern Illinois and located on U.S. Route 51, south and east of St. Louis, Missouri. Well known for hosting the annual DuQuoin State Fair, the area was once heavily involved in the coal mining industry. The DuQuoin Fire Department is a combination fire department. Shannon Clark grew up in DuQuoin and served as a volunteer member of the department for a few years. His memories of the 1954 Ford-Towers pumper featured in Croesman’s article went back to his kindergarten days and followed up until his volunteer years.

It turns out that the Ford-Towers pumper was the first piece of motorized fire apparatus purchased new by the department. Earlier motorized apparatus had all been purchased used. In 1953, then fire chief Augie Schneider had Towers Fire Apparatus, located in nearby Freeburg, Illinois, build a 750-gpm pumper with a 750-gallon water tank. To fit the pumper under the header on the fire station door in the old city hall building, the roof on a 1953 Ford F800 Big Job cab had to be removed and a lower windshield installed, making the rig one of only two “convertibles” built that year by Towers. The pumper would remain in front-line service well into the 1980s and then become a spare engine. In later years, the department would modify the hosebed on the pumper to make the unit rider-friendly for school children for parades and fire prevention activities in the fall. It was this rig that Shannon remembered from a kindergarten ride and later the rig still being on the department roster when he was a volunteer.

Clark’s career would bring him to the Peoria area in central Illinois, but he maintained his DuQuoin roots through the DuQuoin Evening Call. It was a good thing he did as the newspaper article would give him his chance to own and preserve that piece of DuQuoin history.

The pumper was built by Towers Fire Equipment. Towers was a regional manufacturer of fire apparatus including pumpers, tankers, brush units, and rescue squads. Apparatus was built in Freeburg from 1946 until the late 1990s. Most of its customers were smaller fire departments in southern Illinois and eastern Missouri. The interesting point on the DuQuoin pumper is that it never left the department from 1954 until 2015. Modifications were minimal, and for the age of the pumper, the mechanicals were in very good repair. Even better, none of the equipment was missing—including the bell!

When a piece of vintage fire apparatus is offered for sale by sealed bid, nobody knows for sure how that process will turn out. The seller hopes for big dollars while bidders hope their offer is just enough to fend off any other bids. Having a feature story with a good picture in the local newspaper can often spark added interest. For Clark, a volunteer firefighter with DuQuoin from 2006 to 2009, his bid of just over $2,000.00 was the successful bid! In January 2016, Shannon was the new owner of a vintage fire engine. Soon he would be on his way down to DuQuoin to claim his prize right after he looked after a few details back up in the Peoria area.

Fast forward to December 2016 when Clark called to say that the truck had been delivered to his rural Glasford home via tractor trailer. While there is a good-sized shed on the property, there was so much other stuff in the building that Clark did not think there was any way to make room for the fire engine. Somehow where there is a will there is a way, and Shannon got busy and was able to squeeze the rig in. Some milder temperatures for December in central Illinois even allowed Clark to take the rig for an initial spin around the Glasford area. A few days later, with a temperature of 15°F, Clark invited me out to see the rig. He even set the rig out of the shed for a few quick pictures. I passed on a ride, waiting for the warmth of spring.

Clark has been considering his options for possible restoration work on the rig. He is very pleased at the overall condition and complete appearance of his rig. The question whether to do a frame-off restoration or leave “as is” and work around a few concerns such as brake master and wheel cylinders. The rig sure looks good for an original—complete with bell, siren, warning lights, ground ladders, tools, and even the steps added many years ago to allow school children to climb on for a fire truck ride. The “Cargo King” engine runs like a champ—even at 15°F. We will leave the restoration possibilities up to Clark as he ponders some early plans to show off his piece of history in a new area. The 2017 parade and fire buffing season in central Illinois is just around the corner. Early June is the annual Tremont Turkey Festival, and the Tremont (IL) Fire Protection District turns out a nice selection of current and vintage fire apparatus. The department invites area departments and private owners to join in with their apparatus to make a great start to the Sunday afternoon parade. Clark already has that date marked on his calendar. I’m sure that he will be able to find a crew of volunteer riders for the parade season, and most of them will no longer be kindergarten students!