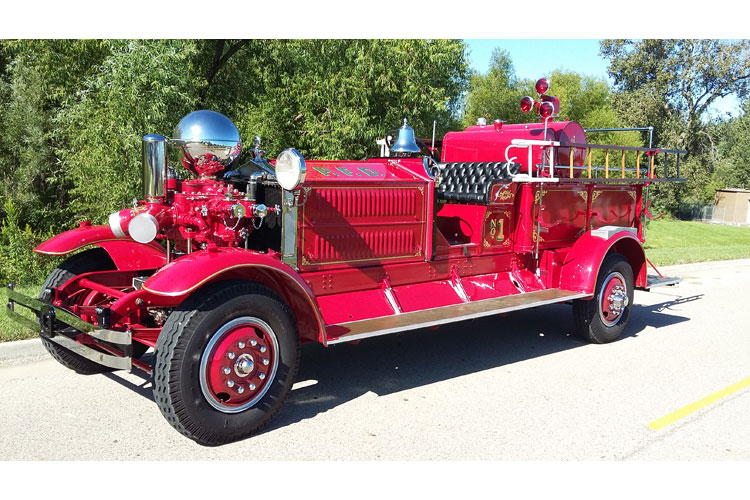 When the Peoria (IL) Fire Department retired Captain Dave Wenzel arrived at Fire Central for this Labor Day Parade he was surprised to see that an old friend would lead the Peoria Fire Fighters Local 50 parade entry. An almost fully restored 1931 Ahrens-Fox 1,000-gpm pumper would lead the apparatus in the parade. Dave Wenzel was on the job from 1957 until 1991. He started his fire department career as a hoseman, moved up to be an engineer, and made fire captain in 1965. In his early days as a firefighter Wenzel often worked off the back of this very same rig. 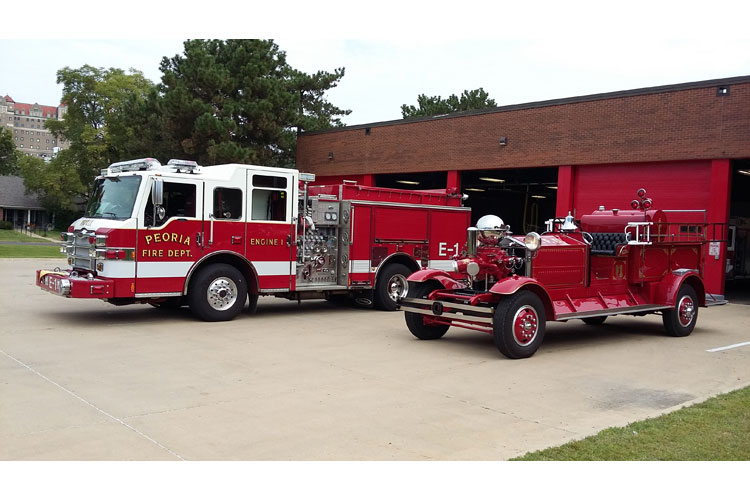 Three years ago, Fire Apparatus & Emergency Equipment‘s Web site featured a joint start-up on a “frame off” restoration on this Ahrens-Fox pumper. The Wheels O’ Time Museum and the downstate SPAAMFAA chapter HOIFEC—Heart of Illinois Fire Enthusiasts and Collectors—came together to start restoration on an 80-year-old pumper. The pumper had always been with the Peoria Fire Department, serving at several fire companies over the years. Department records show the pumper as a reserve piece of apparatus in 1958. Wenzel believes the rig was retired in the early 1960s. When you have what is now an 85-year-old fire truck, you know it would have many stories to tell. The two groups that came together to complete the restoration appreciated some of the stories that Wenzel could share.

For three decades the big pumper would be on the scene at many of the city’s major fires. Thanks to the good work Doug Brignall did in compiling “Peoria Firefighters—A Proud History,” we had some information and pictures to aid in the restoration project. What became of the pumper when it left the Peoria Fire Department is not well documented, however recent contact with another firefighter brings up the fact that Robert Johnson, a former Ahrens-Fox salesman living in Peoria back in the 1960s, made the rounds of Peoria fire stations trying to find someone to purchase the rig from him. Nobody seemed to have any interest in the old truck. It was really unloved. Exactly how Mr. Johnson obtained the rig is a story of several twists and turns known now by only a few people. There are others who recall the pumper sitting out in the driveway at Johnson’s home on Forest Hill in Peoria. Mr. Johnson always wanted to see the rig restored. Failing health prevented him from doing a restoration. At some point he came in contact with Gary Bragg and Jack Seamons, two young men who were involved members in a small museum on the far north edge of the Peoria area. Johnson eventually donated the rig to the museum with the understanding that the people out at the museum would one day restore the pumper. Bragg recalls the day the pumper was towed out to the museum. For a period of more than 30 years the truck would be stored in an out building at the museum.

Seamons and Bragg always kept Johnson’s request to have the rig restored in mind, but there was much to do to keep their museum up and running. An early attempt to restore the rig was not successful. Restoring such a big piece of fire apparatus would need a proper space to do the work, more manpower, and much needed cash. One day about 10 years ago, Bragg opened up the back shed where the pumper rested to a group of “fire buffs” known as HOIFEC. There in that shed, known as “Death Valley” sat the Ahrens-Fox, covered in dust and surrounded by other odds and ends. It would take several years of meetings to bring the two groups together to restore such an important piece of Peoria history.

Bragg and Seamons both knew that to start such a big project the first thing they needed was a proper building to work on the truck. There was no such facility at the museum. That meant erecting a building. Almost four years ago, the museum completed such a structure on the museum grounds. It contained a large workshop area and a display area as well. A big plus was the building had both heat and air conditioning. That was a first for the museum, which is open to the public from May through October. It was an exciting day four years ago this December when the Ahrens-Fox was towed over to the new shop.

The combination of Wheels O’ Time Museum members and HOIFEC members worked well. Many of the museum members who worked on the fire truck were retired from Caterpillar Tractor. Their knowledge on working with big engines was most valuable. Several of the HOIFEC members had their own private vintage fire trucks. With the two organizations working as one group, there were knowledge and skills that would cover the engine, the chassis, and the fire body and the fire pump. It goes without saying that there were many challenges along the way. There were enough problems that had to be overcome to be the subject of a more detailed feature to follow.

This past spring the restoration was reaching a point that we could see light at the end of the tunnel. Some of the crew working on the rig thought it would be good to set a goal for a completion date and an event to introduce the restored pumper to Peoria. Somehow the months between May and September flew past. It was not looking good to be ready to parade the truck in the Peoria Labor Day Parade. We wanted to be a part of the parade as the Fire Fighters Local 50 had supported our project each year for the last three years with a cash donation. The retired firefighters had also made a nice contribution. One week before the parade it was still unknown if we would have the truck ready to parade. Just days before the rebuilt Roto Rays warning light had returned from Virginia. At the same time we had enough striping and decal work applied that we could contact the Peoria Fire Department to see if there might be room to add the 1931 Ahrens-Fox to the parade.

The idea of having the Ahrens-Fox in the parade was enthusiastically received. When it came time to form up for the parade, there was Wenzel. We had some time before the parade stepped off. There was time to have Dave get up front with our driver for a spin around the block. Dave was so enthusiastic that when we were ready to start off in the parade, Dave got up in the hosebed and rode the entire parade route. In many ways it was just like old times.

Restoration of an 85-year-old fire engine is a big job. So much is owed to the dedicated members of the two organizations who gave thousands of hours of labor. We also appreciate several corporate sponsors, and many friends of the ‘Fox for financial help. A big “thank you” to everyone who has been involved in the restoration. We still have a few more things to complete. The Wheels O’ Time Museum welcomes visitors from May through October. Check out its Web site at: www.wheelsotime.org. The location of the museum is just off Route 40 (N. Knoxville Avenue at Woodside Drive) in what is officially Dunlap, Illinois. Look for the big steam locomotive sitting out front. You will find the 1931 Ahrens-Fox in the museum’s fire station.