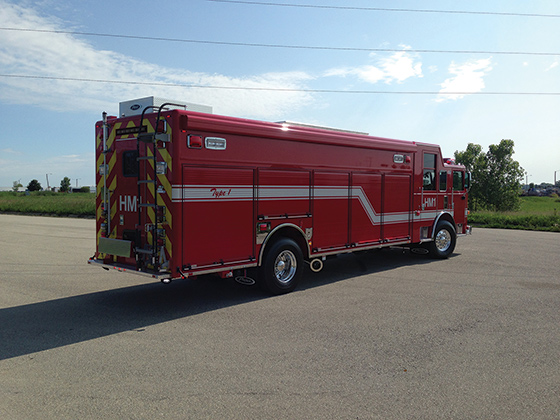 Hazardous materials (hazmat) vehicles have been called the stepchildren of emergency vehicles, likely because they are used much more infrequently than other fire trucks in a department’s fleet.

However, when they are needed, it usually is a critical situation, so most fire departments train regularly on the use of hazmat equipment, which can be carried on a truck that’s sized from small to overly large.

The size of a hazmat rig often depends on a number of considerations, from budget available and the types of hazards to be handled to whether the vehicle is the property of a fire department or a municipal or regional agency. So across the country, fire departments are using a variety of vehicles as their hazmat rigs, from putting hazmat gear in coffin compartments on the top of a pumper to rescues that carry an assortment of hazmat equipment to large vehicles that are specialized decon and hazmat trucks.

Bill Proft, rescue program director for Pierce Manufacturing Inc., observes that a hazmat truck to one department isn’t necessarily considered a hazmat vehicle by the next department. “These trucks vary from relatively small containment-style vehicles to large dual-rear-axle vehicles that have a laboratory on board,” he points out. “To find the best fit, a fire department has to determine what its needs are for its fire protection area, as well as the kind of problems it might be facing.”

Proft notes that gasoline tankers regularly fill up gasoline station tanks around the country, allowing for a potential hazmat situation. “Fire departments can face chemical plant hazards, airport hazards, and roadway hazards from trucks carrying hazardous materials aboard,” he says. “You have to determine what type of hazmat suits you will carry, how they’ll be stored on your vehicle, if you need a laboratory, and if you want or need a decontamination facility. All those decisions go into determining the size of the hazmat vehicle.”

Ed Smith, director of the Emergency Vehicles Group for VT Hackney Inc., says that in past years, fire departments and emergency management agencies responded to hazmat calls, performed containment functions, and also did mitigation. “In the last five years or so, we are seeing very few responders doing mitigation,” Smith says. “They are containing the spill or situation until the mitigation specialist companies arrive to clean it up.”

Doug Kelley, product manager for KME, says, “We have definitely seen smaller hazardous materials vehicles, but we’ve also seen the expansion of the definition of a hazardous materials truck.” In the past, most hazmat vehicles were large heavy rescue-style rigs or big trailers, Kelley notes. “Now, some equipment has gotten smaller, so fire departments are able to put it on a smaller rescue truck and use the vehicle as a hazmat rig.”

Bob Sorensen, vice president of SVI Trucks, says the overwhelming majority of hazmat vehicles SVI Trucks has built have been custom truck units. “Most of these trucks are containment and mitigation vehicles, usually carrying an overpack drum,” Sorensen says. “They generally don’t do cleanup, which is usually done by civilian contractors.”

Hackney’s experience with hazmat vehicles, which Smith notes goes back many years, is chiefly with larger rigs because, according to Smith, “hazmat equipment, by and large, consumes a large amount of cubic feet of space on a vehicle.” For example, Smith says many hazmat rigs carry one or two 95-gallon overpack drums, which are large plastic barrels with a screw-on lid into which hazmat responders can drop a 30-gallon or 55-gallon drum and take it away. “You need a large space to hold those drums,” he adds.

Likewise, level A hazmat suits take up a lot of space on a vehicle and often are hung vertically. Level B and level C hazmat suits are less bulky, Smith says, and often are stored on shelves in a hazmat vehicle or in a rescue truck. “Then there are the booms and pigs that are needed to capture petroleum spills [oil absorbent], other containment equipment, and lots of meters,” he notes. “It depends on the agency that handles hazmat response as to what level it wants to go to, but normally it takes an 18-foot to 22-foot body to haul the equipment.”

“Typically, a fire department will want a walk-in area in the body or cab for an office area where it can use an Internet connection and its reference materials to identify what type of hazard it is facing,” Kelley says. “That’s pretty common in hazmat trucks now. And, a good chunk of them also want some kind of laboratory area where they can do an analysis of what’s on the ground that they are dealing with.”

SVI Trucks also is building a number of combination units, Sorensen says. “The front section has a walk-in for resource planning and command,” he notes, “while the back of the vehicle is walk-around for equipment, which also can be stored on top. We built hazmat trucks for the Glendale (AZ) Fire Department and the Riverside County (CA) Fire Department where both are like that.”

Other equipment on mid- to large-size hazmat vehicles includes generators, usually of 25 kW or more, Kelley says, as well as lots of scene lighting. “Masts with cameras on them have become much more common,” he points out, “and there usually is an air system on board for recharging self-contained breathing apparatus (SCBAs).”

Sorensen notes that the majority of hazmat trucks are outfitted with cameras to record an incident and often have large terabyte-sized servers on them to continuously record and store data. “There’s a trend toward connectivity with the outside world through the Internet,” he says, “where they can talk with Chemtrec®, get into a remote Web site, or even Facetime or Skype a call to talk with a rep from a chemical company.”

Joe Messmer, president of Summit Fire Apparatus, says he’s seen hazmat vehicles in all shapes and sizes. “We just had Canton (OH) Fire Department buy a Ford-F450 combo rescue and hazmat truck that has a fifth-wheel hitch on it,” Messmer says. “Departments are getting creative to match their vehicles with their special situations.”

Summit Fire Apparatus also has built hazmat trailers for fire departments, Messmer points out, 45 feet long or more, and some with rear or side ramps. “We built a hazmat trailer for an agency in Northern Kentucky that was 50 feet long and pulled by a tractor unit,” he says. “We also have built a number of straight trucks with 20-foot-long bodies as hazmat units.”

Jim Kirvida, president of Custom Fire Apparatus (CustomFIRE), says his company has built hazmat vehicles for fire departments, regional hazmat agencies, and private companies. “We recently built a hazmat unit for Marathon Oil in Detroit, Michigan,” Kirvida says. “It has a unique roof line with an electric deployable hand railing around the perimeter of the top of the vehicle as well as a lot of hazmat instrumentation on it.”

CustomFIRE also has built combination command and hazmat trucks, Kirvida says. “Some of them have sniffer units on them,” he adds, “which are telescoping masts that allow sensors to collect air samples.”

Dave Curran, captain of the State of Massachusetts Fire Services, says the state provides hazmat services for cities and towns, parking its vehicles in local fire stations. The state uses firefighters on duty in different departments to staff a half dozen teams with 45 members per team. “We purchased 17 vehicles in one contract, and Hackney built 10 of them,” Curran says. “The units are all set up the same, so when a team member responds to a call, he knows the same meter or suit is on the same shelf, no matter what vehicle he is on.”

The rigs Hackney built carry 14 SCBAs, 16 level A entry suits, 16 level B suits, 60 level C suits, 36 chemical overlay boots, and an assortment of six different styles of gloves, Curran points out. “Each vehicle has a complete decon setup with tarps and pools as well as a complete toolbox; a Midland Corp. tank car kit to cap leaks on any railroad tank car; a chlorine kit; and a lot of booms, shovels, hoses, and recovery drums,” he says.

Curran says that team members had input on where to locate the equipment on the rigs, and that they decided to go with fixed shelves because they felt tool boards took up too much space. The hazmat units that Hackney built, Curran adds, have an overall height of nine feet, nine inches and overall length of 36 feet, six inches on single rear axles because of space limitations at some fire stations.

John Grieble, specialty products manager for Spartan ER, says that large metro fire departments and large county fire agencies often will field a specialized hazmat team on a large hazmat rig but that in smaller communities there’s less space for hazmat equipment on a fleet’s vehicles. “We’re not seeing a lot of small, specialized hazmat trucks,” he says. “They usually are elaborate and well-thought-out vehicles with lots of space and lots of equipment.”

Grieble believes a fire department should consider the uniqueness of the area where the truck will function to figure out what size hazmat vehicle to purchase. “In a lot of areas, they rely on mutual aid with a larger agency that has a hazmat function, which allows them to go with a combination rescue-hazmat vehicle,” he says.

Another consideration with large hazmat rigs is what Grieble calls the “boots to the ground” issue. “With some very large hazmat vehicles, you have to think about how you get the equipment off the vehicle without climbing on it,” Grieble says. “We promote safe storage access on vehicles, keeping heavy items low and light items high and, in many cases, carried on tilt-down or slide-out trays. Some departments also are choosing electric or hydraulic drives for some of the heavier trays.”