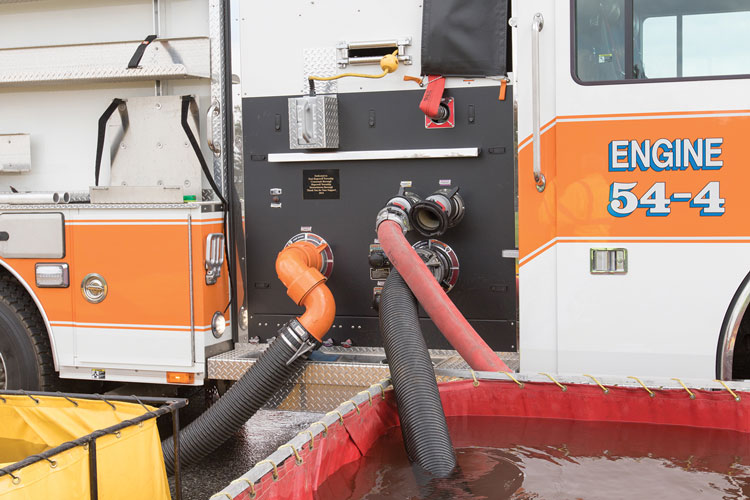 On October 22-23, 2016, Chief Ira Walker Jr. and members of the Eureka Volunteer Fire Department, lin Stewartstown, Pennsylvania, had the opportunity to display their water hauling skills during a weekend rural water supply training seminar sponsored by the department. The 16-hour seminar covered all aspects of hauling water with tankers.

On Sunday morning, crews conducted more practical skill sessions on dump site and fill site operations. The seminar culminated Sunday afternoon with a two-hour tanker shuttle exercise where the goal was to deliver an uninterrupted 500-gallon-per-minute (gpm) flow for two hours. The two-hour exercise is really the “old” ISO two-hour water supply drill where fire departments could demonstrate their ability to haul water in their nonhydranted areas to meet the ISO’s needed fire flows for target hazards within the community. Even though the ISO has moved to computer modeling in lieu of the two-hour drill, the drill is still a good assessment of a department’s ability to initiate and sustain a water supply operation using tankers.

The two-hour drill comprises three time segments. The first segment lasts for five minutes and is sometimes referred to as “setup time.” Time starts on the first engine’s arrival at the designated drill site. At the five-minute mark, that engine must begin flowing water at a rate of 250 gpm-generally through some type of attack line.

The second segment of the drill lasts 10 minutes (minutes five through 15 of the drill). During this segment, water supply operations are allowed to expand using additional personnel and equipment. At the end of the 10-minute segment, the participants can increase the flow to whatever they wish. However, that flow must then be sustained for the remainder of the two-hour period.

The third and final segment of the drill lasts 105 minutes. During this time period, the flow must not be interrupted or reduced. When the ISO used to require this drill, an interruption in flow resulted in drill failure. During training seminars, interruptions in flow and changes in flow rates are accepted as part of the learning process, and the drill continues to allow participants to overcome problems.

During the Eureka seminar, units and personnel from numerous departments surrounding the Stewartstown area participated in the two-hour tanker shuttle exercise. The results of the exercise were much better than the 500-gpm goal. At the five-minute mark, crews started with a flow of 600 gpm and then increased it to 1,100 gpm at the one-hour mark, sustaining it for the remainder of the drill.

The second fill site used a 1,500-gpm pumper to draft and support a single 1,000-gpm loading station. Access to the pond was through a cattle pasture, which limited the operation to a single pumper. The pumper loaded tankers using LDH lines.

The showcase of the two-hour exercise was the dump site pumper, Eureka Engine 54-4, a 2015 Sutphen pumper equipped with a Hale XS 2,250-gpm pump and four suction inlets. Engine 54-4 was designed by members from Eureka to specifically serve as a water supply unit capable of supporting all kinds of water supply operations. The pumper carries 3,200 feet of four-inch LDH in a split hosebed that is color-coded every 800 feet to indicate where to insert an inline relay valve.

The highlight of the dump site operation was Engine 54-4 drafting from four different dump tanks using all four of its suction inlets. The pumper also supplied one jet siphon transfer line from a fifth dump tank. All of this drafting was made possible-and easy-because the pumper is equipped with a Trident Auto Air Prime with multiple-location priming capability. Coupled with an inlet control valve on each suction inlet, the automatic air primer allowed Engine 54-4’s driver to easily manage drafting from four different dump tanks at the same time.

Once flow moved to 1,100 gpm, there were times when individual suction lines had to be shut down because of lack of water. The individual suction inlet control valves made that easy. Once water was back in a dump tank, the automatic air primer made it easy to bring that dump tank back online.

MARK E. DAVIS is the founder and president of GBW Associates, LLC, and a fire service member for more than 30 years. He has a bachelor’s degree in education/fire science and a master’s degree in public administration. He is a certified fire protection specialist (CFPS), FADO, instructor III, and instructor trainer.