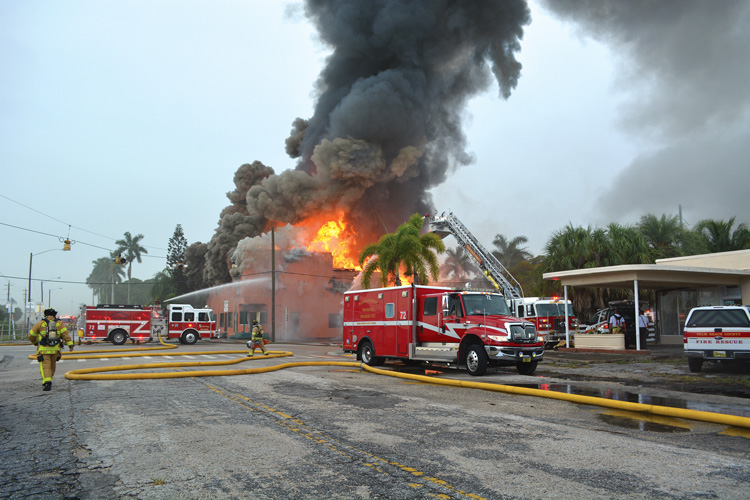 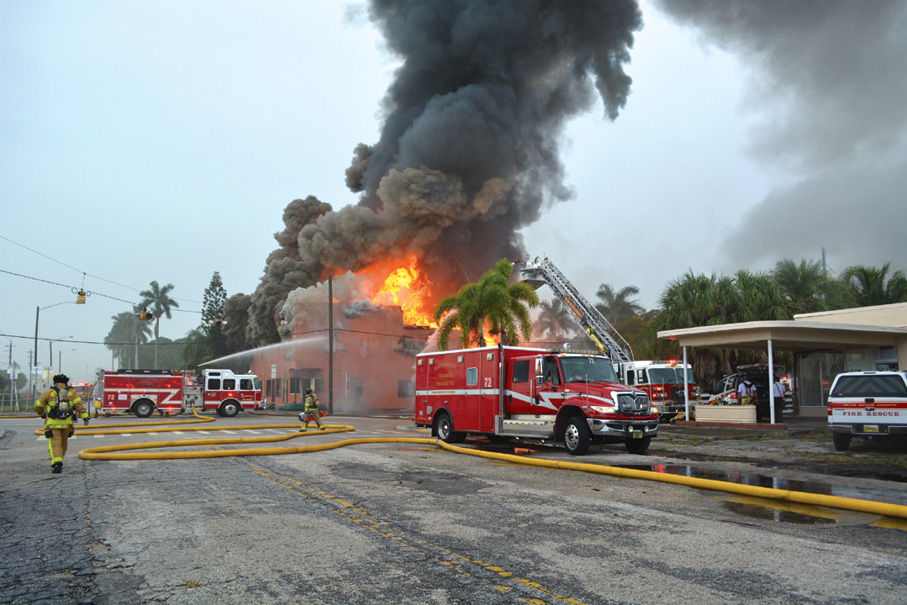 Palm Beach County (FL) Fire Rescue responded to find heavy smoke showing from all windows and doors of a two-story wood-frame building on concrete pilings. The building was abandoned and only used for storage. Because of the well-developed stage of the fire on arrival, the decision was made to go defensive. The fire was caused by a lightning strike. The ambulance pictured is Rescue 72, a 2009 International 4400 with a Horton Rescue Body and Horton HOP SRS system. (Photo by Michael Boike.)

Getting Breathable Air to Firefighters in Mayday Situations

No Mayday situation is the same, and the variety of equipment available for rapid intervention teams (RITs) reflects this fact.

RITs have a plethora of items from which to choose as they equip themselves for the job of going in and rescuing down firefighters during firefighting operations. Generally, department standard operating procedures lay out how RITs should operate at a structure fire once on location. Deployment plans call for one or multiple RITs, depending on the type and size of structure involved. No matter how many, RITs are on standby at the scene of a fire most of the time. Based on personnel at the scene, an incident commander might place a RIT in service to accomplish other tasks but will immediately replace it. The one constant is that a RIT does not act unless called on.

If you are the unfortunate firefighter to become trapped or go down at a fire, hopefully you have trained on self-survival techniques. One is skip breathing, which is intended to conserve the breathable air in your self-contained breathing apparatus (SCBA) cylinder. It becomes necessary to do so when you know you are getting critically low on air but help has not yet arrived. Once the RIT arrives at your location, it may bring a large air cylinder to supplant your air supply. But, what do you do if skip breathing isn’t an option or if you haven’t trained on such a technique? What do you do if skip breathing isn’t enough, depending on the level of entrapment? Firefighter/Engineer Dan DeWitt has an answer.

DeWitt is a third-generation firefighter and began his fire service career with the Chandler (AZ) Fire Department in 2002. He is a fire engineer and has more than 18 years of public safety and emergency medical service experience.

For more than a decade, DeWitt had been considering a way to get breathable air into a fire hose for emergency purposes. Asphyxiation has been cited as a leading cause of noncardiac fireground fatalities. “That is the sole purpose of the design and creation of the Emerency Compressed Air Valve (ECAV®)—to save firefighters,” says DeWitt. “I knew there had to be a way to provide additional breathable air to save the lives of firefighters should they become trapped or injured and need additional air supply. Firefighters are trained to stay with their fire hose, and I knew the hose could be used as an additional lifeline and started the conceptual design.”

After putting his ideas on paper, it took about three years to develop the product that ultimately became ECAV. “The final product, which officially launched in July 2017, is the result of years of research, consulting experts in the fire industry, engineering revisions, and testing,” says DeWitt.

The system is manufactured by DMD Fire Equipment, LLC, for which DeWitt is the president and CEO. There are two main parts to the ECAV system, according to DeWitt: the air injection system and the ECAV device. “The air injection system is mounted to the pump panel and consists of a manifold with a two-stage regulator, relief valve, check valves, shut-off valves, air pressure gauges, SCBA bottle intake, and auxiliary air intake for a utility truck or cascade system.” 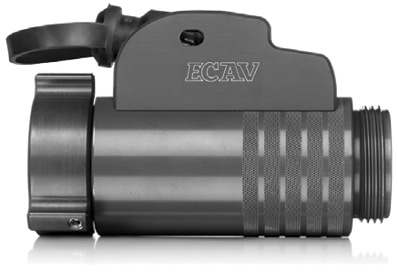 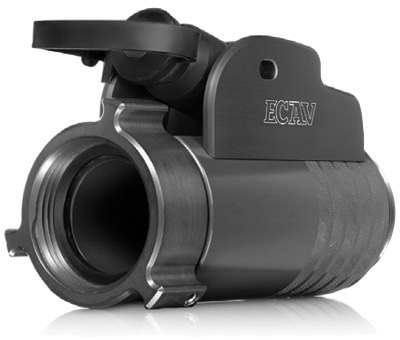 1 2 The ECAV device is attached to the fire nozzle and consists of an anodized aluminum coupling, valve assembly mounted to the coupling, check valve, and UAC quick connect. The air injection system is mounted to the pump panel and consists of a manifold with a two-stage regulator, relief valve, check valves, shutoff valves, air pressure gauges, SCBA bottle intake, and auxiliary air intake for a utility truck or cascade system. (Photos courtesy of DMD Fire Equipment, LLC.)

The ECAV device, he continues, “is attached to the fire nozzle and consists of an anodized aluminum coupling, valve assembly mounted to the coupling, check valve to prevent air loss from the trapped firefighter back into the fire hose, and universal air coupling (UAC) quick connect.”

ECAV is designed with end users in mind and is built to withstand the rigors of firefighting. The coupling and housing are made from the same materials used for most fire hose couplings. “The housing is attached using stainless steel locking threaded inserts for added strength and basic maintenance,” says DeWitt. “The device is engineered and manufactured for longevity and easy maintenance.” ECAV will add approximately two pounds to the hoseline.

Regarding maintenance, DeWitt states that National Fire Protection Association 1962, Standard for the Care, Use, Inspection, Service Testing, and Replacement of Fire Hose, Couplings, Nozzles, and Fire Hose Appliances, requires that appliances attached to preconnected hoselines receive annual testing with the fire hose at the service test pressure. “The ECAV unit should be inspected for leaks at this time,” says DeWitt. “There are two O-rings and a spring that are replaceable when worn or damaged.” For preventive maintenance, DeWitt says departments should conduct annual pressure tests to check for leaks in the system and confirm accurate regulated pressure.

Fire departments can incorporate the ECAV system into existing rigs or spec the system as part of new rigs. For existing fire apparatus, the equipment needed to retrofit the breathable air injection would be provided by DMD Fire Equipment, according to DeWitt. The out-of-service time is minimal, he says, but generally is in the three- to four-hour range because each fire truck is different. For new fire apparatus, DeWitt says departments should spec an ECAV-ready breathable air injection system into water discharges after the water valve. “It will need to have the components provided by DMD Fire Equipment,” he adds.

How the ECAV System Works

Departments that decide to incorporate an ECAV system will have different procedures for placing it in service at an incident, but a general procedure follows:

Up to four firefighters can connect to each other using transfill hoses in series or buddy breathers. The apparatus operator must monitor the pressure to ensure there is an uninterrupted supply of breathable air at 400 psi, either by swapping SCBA bottles or using the auxiliary air intake from an air truck or cascade system.

Every Mayday situation is different, and a fire hose will not always be with the firefighter who is trapped or injured. Even still, the idea that a firefighter would be left without water might leave some ill at ease. “Water is absolutely a critical component of firefighting and protecting the lives of firefighters,” says DeWitt. “It is irreplaceable when fighting fires. However, the devastating and unfortunate reality is that we have lost too many fellow firefighters simply because they did not have an adequate air supply. In many cases, the flames were not the immediate threat—it was the lack of breathable air, which is why I designed ECAV. The primary purpose of ECAV is to be used in a Mayday situation where the firefighter knows his limited air supply is not sufficient and his life may be in danger.”

DeWitt notes that transitioning from stopping water to supplying air or vice versa is a matter of 30 to 45 seconds. “If water is not needed for extinguishment, and smoke inhalation becomes the immediate threat, then the firefighter will call for air,” DeWitt says. “If water is needed, the firefighter can disconnect the SCBA from the ECAV and the engineer can supply water within seconds.”

No Mayday situation is the same, and not every firefighter will have a hoseline available with the ECAV system. However, it does provide an additional method for survival when injured or trapped at a fire. “When a Mayday situation occurs, risk increases on the fireground,” says DeWitt. “Higher-risk tactics are employed where the loss of breathable air is imminent. With ECAV, we reduce the risk not only to the firefighter but also to the RIT that may respond. As firefighters, we risk a lot to save a lot within a structured plan. ECAV will provide vital, breathable air and a safer rescue environment to support that structured plan.”

CHRIS Mc LOONE, senior editor of Fire Apparatus & Emergency Equipment, is a 24-year veteran of the fire service currently serving as a safety officer and former assistant chief with Weldon Fire Company (Glenside, PA). He has served on past apparatus and equipment purchasing committees. He has also held engineering officer positions, where he was responsible for apparatus maintenance and inspection. He has been a writer and an editor for more than 20 years.