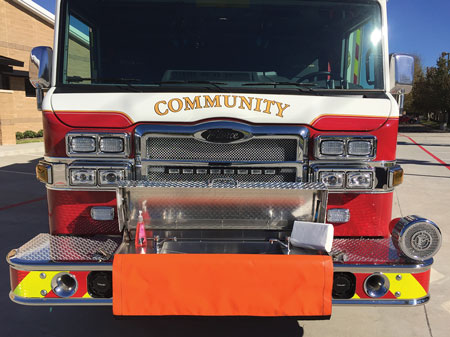 At one time, the front bumpers on fire apparatus served the time-honored purpose of being only a bumper. But in today’s fire world, fire departments are choosing front bumpers that range from slim to wide-from carrying a minimal amount of equipment to bumpers that function as additional compartmentation and equipment housing.

Tim Smits, national sales manager for Pierce Manufacturing Inc., says that manufacturers “are pretty much unlimited in what you can do in a front bumper extension. From extrication equipment and hydraulic reels to a booster reel, winches, and trays for preconnects and crosslays, you can put it up there,” he says.

Dave Rider, director of global product management for Smeal Fire Apparatus, says that because front bumpers lead the way, they are the most customized part of a fire truck and a good use of space. But, bumpers with a lot of equipment in them can be a double-edged sword, Rider notes, especially with the potential for damage if the vehicle is involved in a front-end crash. “Also, the wider you go on a front bumper, the worse the angle of approach gets,” Rider observes. “Thirty inches is probably the widest we can go and still be National Fire Protection Association (NFPA) compliant.” Rider says that the most common element on front bumpers is a two-inch discharge with 1½-inch threads, followed by a front suction along with a trash line. “Rescue bumpers are the third most common type we do, typically with two hydraulic hose reels, a spreader and cutter, or a combi tool.”

Tyler Meekins, sales assistant for 4 Guys Fire Trucks, says 4 Guys has been “seeing a little bit of everything lately in front bumpers. We just had a pumper and a rescue leave with six-inch front bumpers and then built a rescue-pumper for the Portland (CT) Fire Department with two hydraulic reels, a spreader, and cutter set in the width of the 24-inch front bumper, all covered with a diamond plate lid.”

Mike Watts, national sales manager for Toyne, says that on a commercial pumper, it’s not unusual to use the provided bumper in its original configuration. “The same can be true of a custom chassis as well,” Watts says, “although there are many options that can cause the bumper to be extended.” These include, he says, “attack lines, front suction, rescue tools and reels, electric cord reels, portable and permanent winch mounts, bumper turret remote control monitors, and ground sweeps.”

Heavy-duty structural steel bumpers are gaining in popularity, according to Joe Messmer, president of Summit Fire Apparatus. “The minimum size front bumper is six inches and the maximum around 24 inches,” Messmer observes. “We put out a front bumper with two hydraulic tools, two hydraulic reels, 200 feet of 1¾-inch hose, and still tucked a Federal Q2B siren and a winch in there too.”

Donley Frederickson, national sales manager for Rosenbauer, says his company has built extended front bumpers up to 36 inches but that 24 to 28 inches is more common.

Smits points out that manufacturers sometimes build lids or covers on top of front bumpers to allow for more storage and also to help with the angle of approach by not making the bumper too low. “Ninety percent of the vehicles we build have some type of bumper extension,” Smits points out. “We’re building a 75-foot aluminum ladder quint for the Anna (TX) Fire Department that will have a booster reel and 200 feet of 1¾-inch hose in the front bumper, and another for Contra Costa (CA) Fire Department that’s only a 13-inch-extension front bumper with a 1¾-inch jump line up front.”

Messmer states that by locating a hoseline at the front of a vehicle, “It reduces the activity on the side, which is especially important when you’re on a highway. With the hoseline up front, the engineer can point the truck at the accident and drive right up to it.”

Grant Spencer, general manager of Spencer Manufacturing, says his company has built a lot of front bumpers with rescue tools and hydraulic reels on them, as well as bumpers carrying a front suction with a six-foot suction hose and strainer secured in brackets. “When we do the front suction hose, we usually have to put additional warning lights on the truck because sometimes the main ones are blocked,” he adds.

Jeff Bowen, sales consultant for Midwest Fire, agrees that the most common bumper extension is for a 1¾-inch hoseline, although he had one customer who wanted a dry chemical fire extinguisher mounted on a rig’s front bumper. “But, most are 12 to 14 inches tall so we can safely drop a hose well or tube in there and flush-mount a Federal Q2B siren,” he says.

Bowen says bumper monitors are popular on wildland apparatus and pumper-tankers. “Most wildland trucks have some type of bumper monitor like the Elkhart Brass Sidewinder or other model,” he says. “And, we are seeing more of them on pumper-tankers where the operator can drive down a roadway and extinguish fire in the median or on the side of the road.”

Some departments choose a simple front bumper, says Todd Nix, apparatus consultant for Unruh Fire. “For the Verplank (NY) Fire Department, we built a push-bar type front bumper with a brush guard and a receiver hitch to house a portable winch,” Nix says. “And for the Two Rock (CA) Volunteer Fire Department, we built a front bumper with a preconnected hose tray to use on car fires where the apparatus could be placed as a safety barrier between firefighters and traffic.”

Bob Sorensen, vice president of SVI Trucks, says his company recently built a front bumper holding 200 feet of one-inch booster line on a wet rescue truck for Aberdeen (NJ) Fire District Number 1. “We also did a similar one for the Greeley (CO) Fire Department with a preconnect mounted at a 45-degree up angle so the hose doesn’t kink,” Sorensen says.

Jim Kirvida, president of CustomFIRE, says that many of CustomFIRE’s heavy rescues are becoming wet rescues. “They usually have pumps of 350 to 500 gpm on them,” Kirvida points out. “For the North Beach (MD) Volunteer Fire Department, we built a walk-in rescue with a 500-gpm pump, 500-gallon water tank, and front bumper with a 1¾-inch discharge and a winch.”

Mike Marquis, vice president of national sales for Rescue 1, says that front bumpers on rescue trucks are an extension of the equipment stored in the body, “like a rescue truck in front of the rescue truck,” he says. But, he points out that there can be drawbacks. “Many extended bumpers are up to 28 inches long, which is no problem in flat terrain but might be an issue in hilly areas,” Marquis says.” And, an extended bumper also increases the overall length of the vehicle.”

For the New Vernon (NJ) Fire Department, which couldn’t have an extended front bumper, Rescue 1 built a six-inch bumper that incorporated Holmatro bulkhead fittings. “Today, where you can connect and disconnect hydraulic tools when they are hot, you don’t need a hydraulic reel up front anymore,” Marquis says. However, he adds, “Both Akron Brass and Hannay offer 12-inch overall height reels that fit 50 feet of hydraulic hose, so we can stay within the plane of the front bumper itself and not have angle-of-approach issues.”

For the Spearfish (SD) Fire Department, SVI built a 28-inch front bumper that holds two preconnected hydraulic tools and two hose reels, Sorensen points out. “The equipment is both inboard and outboard of the frame rails, and all the buckets are angled so they have a good angle of approach,” he adds.

One of the most unusual pieces of equipment that Pierce has built into a front bumper is a sink for the Community (TX) Volunteer Fire Department. Deputy Chief Ken Rammrath says the rehab vehicle Pierce built is on a walk-in heavy rescue chassis. “We designed the truck with freezer space inside to provide nourishment on a long event,” Rammrath says. “The vehicle also has a small galley kitchen, a sink, a refrigerator, a second freezer for ice, and microwave ovens.”

The idea for the sink in the front bumper of the vehicle came from Sugar Land (TX) Fire Department Battalion Chief Doug Boeker along with Rammrath’s desire to keep the chemical byproducts of fire that might be on the faces and hands of firefighters from contaminating the interior of the vehicle and its food-serving spaces. “So, we put two sinks outside on the truck with water piped from an onboard storage tank where firefighters could wash up before going inside,” he says.” You push on a lever to get water to the sink, and the gray water drops into buckets underneath the bumper so we can properly dispose of it.”

Trapper Meadors, sales engineer for Precision Fire Apparatus, says Precision built a heavy rescue for the Forbes Road (PA) Volunteer Fire Department with an extended front bumper that carries LED tripod lights and an electric cord reel. “And for the Beaver Township (OH) Fire Department, we put an extended bumper on a Freightliner commercial chassis that had dual five-inch front suctions,” Meadors says. “With a 2,250-gallon-per-minute (gpm) pump, the two front suctions could exceed the capacity of the pump.”

Manufacturers have to be cautious about what they might cover up on the front of a vehicle, he notes. “Besides lights, you have the radiator up there that has to have good airflow,” Frederickson says. “Our new Commander chassis has a radiator that’s wider and sits lower to catch air underneath a bumper and also has a wider grille that improves airflow and isn’t as affected by a front bumper extension.”

Shane Krueger, sales manager for Marion Body Works, points out that while you can fit just about any tool in a front bumper, it’s important to have a plan for the tools kept there. “If you use the front bumper for hydraulic tools, keep in mind your tool’s power source,” he says. “Whether you have electric or hydraulic tools or both, make sure you have the proper power cables and cords hooked up so you can run them all.”

Knowing the mission of a front bumper also is important, Krueger adds. “Work out the details of the mission and tools to be stored in the front bumper before project construction,” he says, “so you can recognize the limitations that can impact length, depth, and structural integrity of the bumper extension.”