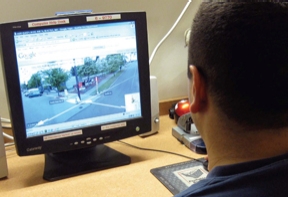 Stepping inside a new $1.5 million mobile command vehicle built by Pierce Manufacturing for the Frisco (Texas) Fire Department can be intimidating. You’re surrounded by a half-dozen sophisticated work stations, and video monitors of different sizes are everywhere, some displaying multiple images that can come from anywhere in the world and be sent anywhere in the world.

“When firefighters go into the truck, what I see is initial hesitation from the amount of technology,” said Assistant Chief Paul Siebert. “But once we sit them down and walk them through what they need to do or don’t need to do to get this thing up and running, they’re amazed by how easy it is to set the truck up.”

Communications – particularly video – is a big part of the vehicle, which has 23 monitors, including an outside 42-inch display, three mast cameras – standard definition, high-definition and thermal – satellite receivers for digital TV and six perimeter cameras. In addition the truck is equipped with two handheld thermal imagers that can send wireless signals back for viewing. A 16-channel digital video recorder (DVR) maintains a record of what is seen.

“We not only wanted to take the information from that truck and push it back to our emergency operations center or anywhere else we needed it, but also be able to take information from other fire trucks and bring it back to the command truck,” Siebert said. “One of the features is our ability to grab the video off our hazmat truck and our heavy rescue truck and bring that video back in almost real time into the truck through streaming and be able to see the images from those cameras as well as the images on the cameras in the truck itself. So it gives us a variety of perspectives on any particular incident.”

While Pierce built the truck, another Oshkosh company, Frontline Communications, developed and installed the audio video system, the radio system and the network and phone systems.

“The systems integration efforts of Frontline Communications,” Jones said, “were significant in providing a ‘single source’ capability that is unmatched in the industry.”

The Frisco truck is built on Pierce’s Velocity chassis with TAK-4 independent front suspension, a 450-hp engine, Command Zone advanced electronics and a 62,800 GVW rating. It has a 34.5-foot aluminum walk-in command body with three slide-out modules for additional room inside when deployed at an emergency scene. Total interior floor space with the slide-out rooms extended is more than 315 square feet.

Pierce put the command vehicle on display in late August at the Fire-Rescue International trade show in Dallas, where it drew considerable interest before going into service in nearby Frisco in September.

Siebert said Frisco Fire Chief Mack Borchardt asked him three years ago to start thinking about what he would like to see in a command truck. “I have friends who work in the technology part of the broadcast industry,” he said. “They recommended Frontline as one of the leaders for building broadcast trucks. We were looking to find a way to push information back and forth quickly, specifically video.”

Siebert also wanted the ability to print large maps or building floor plans. So the Pierce/Frontline vehicle is equipped with a 36-inch plotter.

Because he had been in command trucks where the noise level was so high that it was difficult to carry on a conversation, Sibert said one of his objectives was a quiet atmosphere. “The solution Frontline proposed is one of the more interesting pieces on the truck,” he said. “It gives that person at a work station the ability to not only listen to their 800 radio on their headset, but also monitor the television or the outside cameras or whatever input they may need from their monitor as well as listening to their audio from their laptop in front of them.”

He said the truck has headsets for people who are not assigned to a work station, but want to watch one of the two big video monitors fore and aft without disturbing anyone.

“It’s really something to see when everybody is sitting there and doing their own thing in that quiet environment,” he said.

Although the command truck was purchased by Frisco through bonding, Siebert said the community regards it as a regional resource. The department covers a 70-square-mile area with a population of 103,000 north of Dallas-Fort Worth with about 150 firefighters and six stations. The department operates six frontline engines, three reserve engines and two ladder companies.

The new command truck, according to Siebert, is certain to be used at about 10 large local events a year, a number of them at Pizza Hut Park, a major league soccer stadium that seats 21,000 for games and about 30,000 for concerts. At those events, he said, it will replace two vehicles that were used by police and fire officials.

In addition, Siebert said, the new command-communications vehicle may be deployed outside Frisco through the Texas statewide mutual aid system for events and emergencies, such as hurricanes and wildfires.

“We’ve already had folks from the state operations center and from the Texas Forestry Service look through the truck and express some interest to determine its availability and usability,” he said.

Siebert calls Pierce/Frontline vehicle a multi-functional tool to plug into the incident command system. “It could be the source for a police department command post, it could be a public information site, it could be an area command,” he said. “It really just grabs information and brings it to you.”

Go to www.fireindex.com and click company or products named in story above.