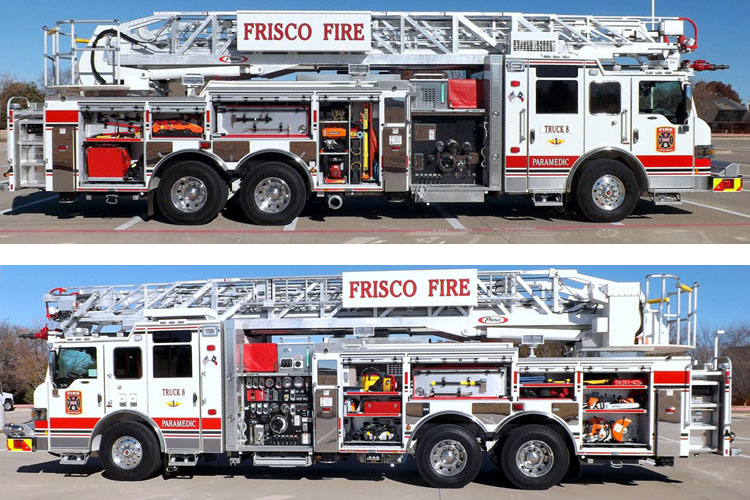 Story and Photos by Lindsay Dye

Truck 8 began service with the Frisco (TX) Fire Department on November 21, 2017. The cab and chassis are the Pierce Velocity model with TAK-4 independent front suspension. Seating for six is provided, as is an EMS compartment centered on the rear wall of the cab. A Danhard AC unit (13,500-Btu) mounted on the cab roof provides auxiliary temperature control when the apparatus is not in use. The cab and body are constructed of aluminum, and AMDOR roll-up compartment doors are part of the body package. SCBA cylinder storage is located in the center compartments between the rear wheels on each side of the body along with extinguisher compartments located in front of and to the rear of the SCBA compartments.

The truck is powered by a Cummins ISX12 500-hp engine paired with an Allison Fifth Generation EVS P 4500 transmission with six speeds and pushbutton shifter. An Onan 15-kW hydraulic generator is mounted on the right side on top of the pump. The Pierce Command Zone advanced electronic and control system is featured.

The apparatus has a Hale Qmax-XS 200 single-stage 2,000-gpm pump with a 275-gallon polypropylene tank. Foam is provided by a Husky 12 System with a 25-gallon foam cell with the crosslays, right side 2½-inch discharge and aerial waterway plumbed for foam. Two 1¾-inch lower crosslays (200 feet each) and one 2½-inch crosslay (250 feet) are located behind the cab. The hosebed accommodates 1,000 feet of five-inch LDH. 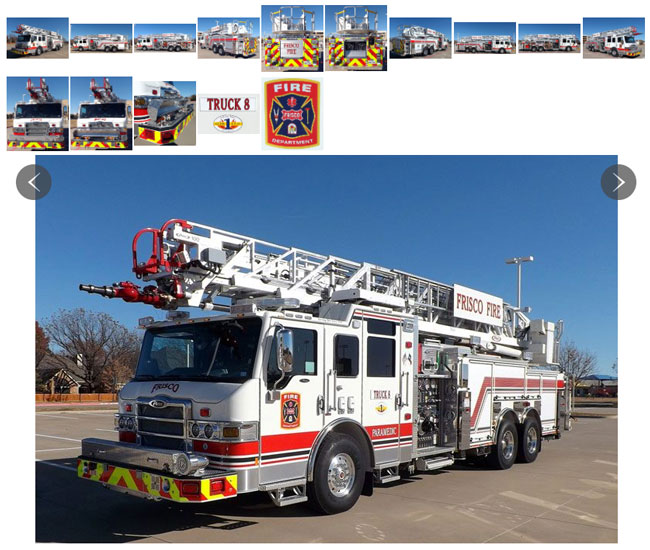 The aerial is a rear-mount, heavy-duty 100-foot stick constructed of aluminum, which features a steel waterway and an Elkhart Scorpion Model 8294-04 monitor paired with an Elkhart Model SM-1500E electric nozzle. TecNiq LED lighting (green) adorns the aerial for nighttime operations. Hi-Viz FT-WI-X-12 LED lights are mounted on each side of the fly and base sections of the aerial. A full complement of Duo-Safety ground ladders (two 35-foot two-section, one 28-foot two-section, one 24-foot two-section, one 20-foot roof, two 16-foot roof, and a 10-foot folding) is stored in the torque box. A 16-foot ladder is mounted on the left side of the aerial, and a Stokes box is mounted on the right side. The front bumper tray houses a Holmatro CORE Technology CU4035CNCT2 cutter and a Holmatro CORE Technology SP4240C spreader.

The warning lights include two Whelen Mini Freedom 21.5 inch light bars on the cab corners with Whelen M6 & M7 LED lights located around the rig perimeter. Whelen I2CSM lights are angle-mounted in the grill corners. Whelen Model L31HRFN LED beacons are mounted on the upper rear corners of the truck. Scene lighting is provided by Whelen Pioneer Model LED lights—two on the cab brow, one on each side of the cab behind the crew doors, and two pedestal-mounted on each side of the body. Audio warning devices include a pedestal-mounted Federal Q2 along with a Whelen Model 295HFSC9 dual-tone electronic siren module connected to two Whelen Model SA315P speakers recessed in the front bumper. A Whelen HOWLER also provides audio warning sound.