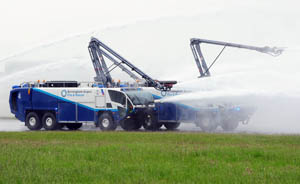 Three of the five Birmingham Striker vehicles are equipped with Snozzle® high-reach extendable turrets. The Snozzle can penetrate an aircraft fuselage in the event of an aircraft incident, allowing direct and close range access to an onboard fire.  In addition, the vehicles are equipped with hydrochem nozzles that can discharge water and dry powder simultaneously. Other features include vehicle data recorders to catalogue the driver’s actions when responding to an emergency and forward-looking infrared (FLIR) cameras.

Birmingham Airport is located near the city of Birmingham, in the West Midlands region of England. In 2012, Birmingham Airport served close to 9 million passengers, making it the seventh busiest UK airport. The airport offers both domestic as well as international destinations in Europe, the Middle East, Pakistan, North America and the Caribbean.