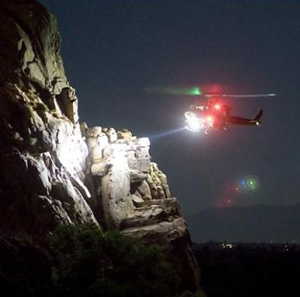 While hiking with friends in the rugged hillside above the Mojave River just East of Hwy. 18 along the Apple Valley/Victorville border, a young adult became stranded on a six-inch ledge. The subject was standing with his back against the rocks on the ledge approximately 600 feet from the top of the hillside and 200 feet from the river bottom. Friends were able to climb to safety and call for help.

A San Bernardino County Sheriff’s Helicopter quickly located the victim on the hillside and was able to provide fire rescue units the exact location of the stranded hiker along with pertinent information regarding the terrain.

The victim was believed to have been on the ledge for several hours and was becoming fatigued, increasing his chance of falling. Knowing time was of the essence, rescue personnel from the San Bernardino County (CA) Fire and Sheriff Dept., along with the Apple Valley (CA) Fire Deptartment determined the safest and quickest way to effect the rescue was by aircraft.

Los Angeles County (CA) Fire Air Rescue 11 was called to the scene and within 20 minutes of arrival, was able to hoist the trapped victim from the rocks to safety. The noninjured hiker was then flown to Victor Valley Hospital where he was reunited with his family and friends.

Purchasing Apparatus for the Future