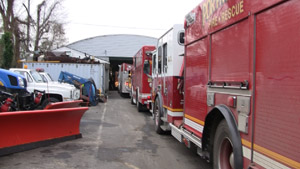 NESQUEHONING, PA –On Saturday, November 10, KME took part in a relief effort called “Carbon County, PA helps Sea Bright, New Jersey”. Part of KME’s contribution was to perform much needed routine services to Fire Department in the areas of New Jersey hit hardest by the storm. Since the storm hit the east coast, fire departments in the towns hit hardest have been running non-stop and simply have not had the time to perform routine preventive maintenance on their fire apparatus. Add to the extreme conditions of high water levels and debris in the roads and those trucks in particular were in need of some attention.

KME reached out to departments and scheduled 33 trucks for services, but due to fire department activity, only 21 of those trucks were able to be serviced due to call volumes in some departments. KME brought and donated all materials and labor to perform complete fluid and filter replacements, as well as give each truck a complete inspection. The list of items that would need attention was given to each department for them to have fixed. “For KME to step up and say we want to do these services is a huge gesture on their part” says Fred Migliaccio, Director of Public Works at the City of Long Branch. Mr. Migliaccio was able to provide the City of Long Branch’s Public Works building to give KME the space to safely perform all of the services. With these trucks running constantly in the recent harsh conditions, it was important to perform these maintenance items but there simply wasn’t time or opportunity for most departments to take care of them.

John Kovatch IV, Director of Customer Service for KME was one of the KME employees that made the early morning trip to help. “This is how KME gives back, our company is all about giving back”, John says as he thanked the employees that gave their time to help out. John goes on to say “It was nice to be down there and help out. It was nice to go down and work hands-on with the trucks and know we made a difference, all of us together”.