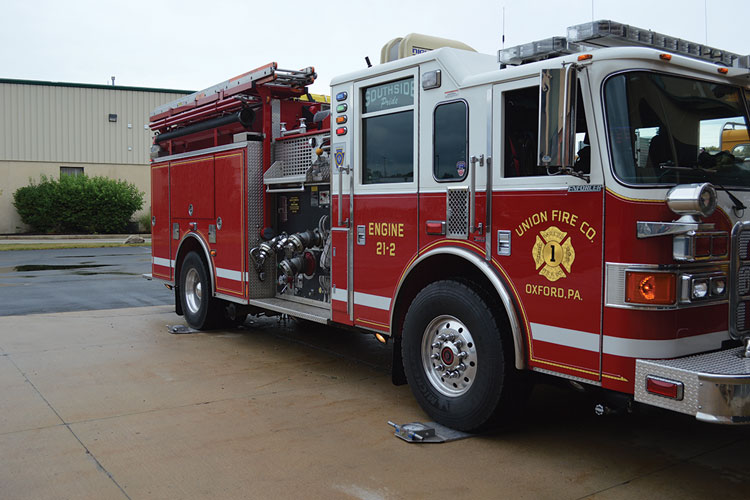 On September 19, 2016, the West Chester (PA) Fire Department, in conjunction with the Chester County (PA) Crash Reconstruction Team, hosted a unique training opportunity for firefighters and police officers in the Philadelphia, Pennsylvania, region.

Members from both sides of the aisle participated in a major skid test demonstration that provided invaluable information for the firefighters and police officers in attendance.

In May 2016, I was contacted by the captain of the Good Will Fire Company, West Chester, Pennsylvania, who explained that the department was expecting delivery of a new water tender. Recognizing the significant safety issues related to operating a water tender, the leadership of the Good Will Fire Company wanted to ensure that their drivers were properly trained when the truck arrived. Fire company officers initially reached out to schedule my “Drive to Survive” training seminar for the members. The seminar was held on a regularly scheduled drill night and was attended by nearly every active member in the company.

Following the classroom session, the fire company officers wished to experience the classroom theories in real life. After some discussion, it was decided that we would attempt to schedule what is believed to be the first combined fire department/crash reconstruction training event of its kind. After agreeing on a date and time, I reached out to police departments in the area to request local crash reconstruction and truck enforcement team assistance. The response was overwhelming.

Once we realized there would be more than enough police officers in attendance, we invited every fire department in the county to attend. Four fire departments wished to participate and gladly sent apparatus and members to assist. There were two major goals for the training session:

Prior to fire apparatus arrival, police officers divided into teams. Each team was responsible for gathering such information as vehicle weights, pushrod strokes, tire information, deceleration and acceleration rates, and siren sound pressure levels. As each apparatus arrived, police officers swarmed it and went about the task of gathering the necessary data to ensure successful testing. They mounted data recording equipment to the apparatus for skid tests, and once the vehicles were properly documented, fire company representatives drove to a nearby test site.

Once the apparatus arrived at the test site, they went through several tests. Each truck skidded to a stop three times and accelerated three times, all while being monitored by sophisticated data recording equipment. After each truck skidded to a stop, crash reconstruction experts downloaded the vehicle’s “black box” information to validate the data recorded by this equipment while also demonstrating to the firefighters how the black boxes work.

The team recorded the data gathered during testing, which will be used for future studies that will examine fire apparatus braking and acceleration abilities. These studies will help to better train fire apparatus operators on the performance of their vehicles while also providing crash reconstruction teams with invaluable data that can be used in the event of future fire apparatus crashes.

Over the next several months, several articles will report on the data gathered during this testing. While each article will go into detail on individual topics, there were several key points gleaned during the tests:

CHRIS DALY is a 19-year police veteran, currently serving as a patrol supervisor in West Chester, Pennsylvania. He is an accredited crash reconstructionist and a lead investigator for the Chester County (PA) Serious Crash Assistance Team. In addition to his police duties, he has served 26 years as both a career and volunteer firefighter, holding numerous positions including assistant chief. Daly has a master’s degree in environmental health engineering from Johns Hopkins University and is a contributing author to numerous fire service professional publications including Fire Apparatus & Emergency Equipment and Fire Engineering. He is a member of the editorial advisory board for Fire Apparatus & Emergency Equipment. Daly has also developed an emergency vehicle driver training program called “Drive to Survive,” which has been presented to more than 15,000 firefighters and police officers at more than 380 emergency service agencies across the United States.