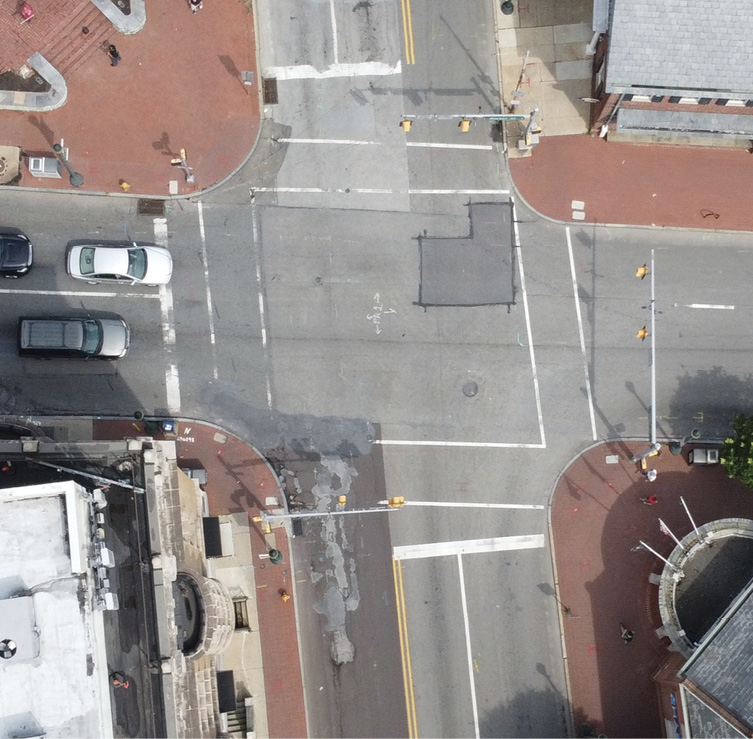 Just when I think I have wrapped up the topic of g-force, something else comes along. In keeping with this tradition, I have noticed a number of training-related vehicle crashes in recent years. In several cases, the driver and crew find themselves rolling onto their side while practicing a low-speed turn in a parking lot. Why?

By now, it should be no surprise that a tight turn, even at a low speed, can generate enough lateral g-force to roll an apparatus onto its side. To understand this concept better, let’s examine two scenarios. One scenario is a sweeping curve on a high-speed road; the other is a 90-degree urban intersection. Remember that the sweeping curve will have a large curve radius, while the urban intersection will have a small curve radius.

1 A sweeping curve outside of Downingtown, Pennsylvania. The measured radius of this curve is approximately 2,087 feet, which is not that severe. However, a vehicle will still experience lateral g-force as it traverses this curve. (Photos by author.)

Let’s first examine a wide, 50-mile-per-hour (mph) roadway, just outside of Downingtown, Pennsylvania. The measured radius of the inside travel lane for this road is 2,087 feet. When we calculate the lateral g-force for this curve, we see that even at high speeds, the g-force is not all that severe. This is not to say that it is safe to drive this curve at 80 mph! But, we do see that a high travel speed does not equate to a large g-force when traveling through this wide, sweeping curve (Table 1).

Now, let’s examine a sharp corner at a 90-degree urban intersection—a four-way intersection in West Chester, Pennsylvania. The measured turning radius for a vehicle making a right turn from the southeast corner is only 26 feet. When we examine the lateral g-force of a turning vehicle, we see that the g-force is quite high, even if the vehicle is traveling at a relatively low speed (Table 2). Also notice how a small speed increase of just a few mph will result in a large increase in g-force. This is an important teaching point.

Table 2 shows the lateral g-force of the 90-degree intersection depicted in photo 2. Notice how the g-force increases substantially with just a one-mph increase in speed. This is a reminder of why it is so important to slow down and negotiate sharp curves at a low speed. A fire apparatus would most likely roll over if it rounded this corner any faster than 14 to 16 mph!

WHAT DOES THIS MEAN?

A sensation of excessive g-force should serve as a warning to the driver that he needs to slow down. As discussed in previous articles, most drivers will start to feel uncomfortable when the lateral g-force rises above 0.20 g. When we examine Table 2, we see that most drivers would start to sense that things are getting unsafe if they rounded this urban intersection at more than 10 mph.

2 An urban intersection in West Chester, Pennsylvania. A vehicle turning right would traverse a curve radius of approximately 26 feet. This tight turn radius will result in high lateral g-force, even at low speed. Fire apparatus operators must be especially careful when turning at an intersection.

More importantly, we must remember that the rollover threshold of the average fire apparatus falls between 0.50 and 0.60 lateral g. If we consider the urban intersection depicted in Table 2, we see that the apparatus could roll onto its side if the driver exceeds more than 14 to 16 mph. This means that the difference between feeling uncomfortable and rolling over is just 4 mph. This doesn’t leave much warning for the driver and crew, which is an extremely important teaching point.

Most fire departments will go out on a nice day and find a large parking lot in which to conduct driver training. This practice is especially common immediately after the arrival of a brand-new truck. Although this type of training is important, drivers and driver trainers must understand the importance of speed limitations during these types of training exercises. Let’s look at an example.

Photo 3 shows a parking lot in which I have done a lot of driver training. As with most of the parking lots that we train in, there are obstacles such as mulch beds and light poles. These obstacles will further restrict the size of an already small venue. In the case of this parking lot, the distance between the mulch beds is only 90 feet.

If we were to practice turning in the open area between the mulch beds, there would only be 90 feet to work with. This means that the turning radius of the exercise would be around 40 feet (half the distance of the 90-foot diameter minus half the width of the truck). When we examine the lateral g-force that a fire apparatus would experience while turning in a 40-foot circle, we see that it does not take much speed to get into a dangerous situation. More than likely, the truck would roll over at a speed of less than 19 mph. At 19 mph, the apparatus is operating at the very edge of its ability. Driver trainers should ensure that the apparatus does not round this circle at any more than 10 to 11 mph to keep the lateral g-force below 0.20 g—and, even then, the driver and the trainer must be extremely aware of how easy it will be to “goose” the gas pedal and put the apparatus in a potential rollover situation.

Table 3 is the lateral g-force of a tight turn during this simulated driver training exercise. As is evidenced by the table, the average fire apparatus could exceed its rollover threshold at a turning speed of just 18 to 20 mph.

3 A parking lot used for fire apparatus driver training. The distance between the mulch beds is 90 feet. This results in a turning radius of 40 feet for driver training exercises. When turning a fire apparatus in such a tight circle, drivers and trainers must be especially aware of the potential to flip a rig onto its side.

Now, let’s look at the reality of training. Driver training often involves a new truck that handles completely differently from an old truck. The apparatus is usually more powerful, and it may be more difficult for a driver to judge speed because he is unfamiliar with the new apparatus. In addition to this unfamiliarity, it is not unusual to take a new rig out to “see what it can do.” If the driver misjudges or overdrives the apparatus by just a few mph, we see how easy it can be to flip the rig in a parking lot!

This is why it is so important to understand the limitations of driver training. Although conducting low-speed driver training exercises in a parking lot is important, drivers and driver trainers must remember to keep the amount of lateral g-force below 0.20 g. This usually means never exceeding 10 mph. Also, remember, if the rig is turning sharply, there is only a small difference in speed between feeling uncomfortable and rolling onto your side. There will be little warning that the vehicle is being driven unsafely, and just a few mph can be the difference between a successful training evolution and disaster.

As a final note, also be wary of tearing up asphalt when conducting driver training in a parking lot. This is especially true in warmer climates or for large-scale emergency vehicle operators courses (EVOC) that will use a parking lot for hours on end. Several fire departments have had to pay to replace an asphalt parking lot because the tires of the apparatus combined with large lateral g-forces tore up the roadway. Make sure you have permission from the parking lot owner for these types of exercises; also make sure your insurance company will cover you for any damage to a private lot. Maybe one day we all will have access to a large, concrete EVOC pad, just like everyone has access to a burn house. I can dream ….

Chris Daly is a 23-year police veteran currently serving as a patrol supervisor in West Chester, Pennsylvania. He is an accredited crash reconstructionist (ACTAR #1863) and a lead investigator for the Chester County Serious Crash Assistance Team. In addition to his police duties, he has served 29 years as both a career and volunteer firefighter, holding numerous positions including the rank of assistant chief. He has a master’s degree in environmental health engineering from Johns Hopkins University and is a contributing author to numerous fire service publications including Fire Apparatus & Emergency Equipment and Fire Engineering. He has also developed an emergency vehicle driver training program entitled “Drive to Survive,” which has been presented to more than 22,000 firefighters and police officers across the United States. Additional resources concerning emergency vehicle crash reconstruction and seminar scheduling can be found at his Web site www.drivetosurvive.org.