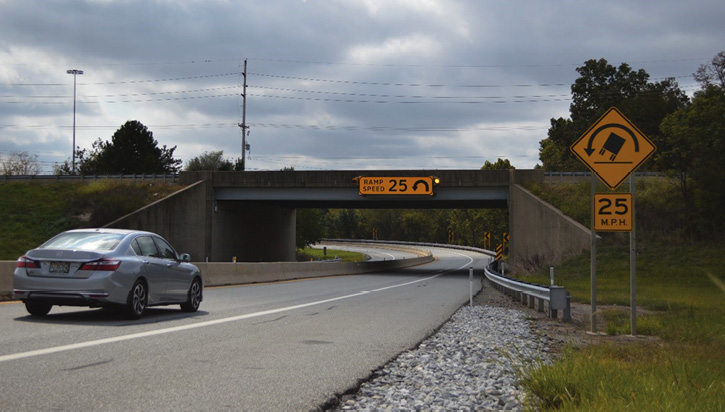 One of the more common questions I am asked in the “Drive to Survive” program is how a highway department determines a curve advisory speed. Curve advisory speeds are the black and yellow signs that are commonly posted along a roadway just before a curve.

When designing a road, highway engineers strive to build a straight road with as few curves as possible. Although this may be simple to do in areas of the country with wide open spaces, in other regions it is next to impossible. This is because of obstacles created by topography, streams, buildings, and the like. When a curve in the road cannot be avoided, highway engineers will likely post a curve advisory speed to let drivers know the safe and appropriate speed for traversing the curve.

1 The posted advisory speed for this curve is 25 mph, which results in a comfortable lateral g-force of 0.15 g. (Photos by Katia Daly.)

When determining a curve advisory speed, highway engineers consider several factors. The first and most obvious factor is to ensure that the amount of lateral g-force the vehicle experiences while rounding the curve does not exceed the available friction of the roadway. This depends on how sharp the curve is, the speed the vehicle is traveling, and the bank in the road. When highway engineers have no choice but to build a sharp curve in the road, they will post a curve advisory speed to reduce a vehicle’s speed and thus the amount of lateral g-force a vehicle will experience while rounding the curve. Remember that if the vehicle’s lateral g-force exceeds the “stickiness” of the roadway, the tires will lose their grip and break traction with the road.

Keep in mind that the amount of grip available between a tire and the road surface depends on several factors, including road materials, weather, speed, tire condition, tire pressure, and the bank in the road. According to published studies, the maximum available lateral grip for a smooth tire on wet concrete pavement can be as low as 0.35 g at 45 miles per hour (mph).1 Using this value as a benchmark, highway engineers will post an advisory curve speed accordingly.

2 The posted advisory speed for this curve is 30 mph, which results in a comfortable lateral g-force of 0.11 g.

As a curve gets sharper, such as when turning at a 90-degree intersection, just a small increase in speed can result in a large increase in lateral g-force. This reduces the margin of error for a fire apparatus operator who may take a turn too fast at an intersection

In addition to the amount of tire grip available, highway engineers also consider the speed at which the lateral g-force will start to become uncomfortable or alarming to the driver. Studies have shown that drivers will tolerate higher lateral g-force at lower speeds. However, as the speed limit increases, such as on a large open highway, drivers tend to be less tolerant of lateral g-force when rounding a curve. The results of these studies are provided in Table 1.2 Using the values provided in Table 1, highway engineers will post an advisory speed that keeps the lateral g-force the driver experiences to a tolerable level.

The final factor when posting an advisory curve speed is the sight distance into the curve. Highway engineers must ensure that a driver entering a curve will have enough forward sight distance to see a hazard in the roadway, react to the hazard, and bring the vehicle to a safe stop before slamming into the object in the road. An example of this scenario would be a vehicle that is rounding a curve while approaching an intersection that is controlled by a red light or stop sign. There may be times when traffic is stacked at the intersection waiting to move forward. If a driver rounds a curve too fast while approaching this line of stopped traffic, the driver may not have enough time to see the stopped traffic and skid to a stop before slamming into the back of a waiting vehicle. By posting a curve advisory speed, highway engineers can help ensure that a driver will have enough time and distance to perceive, react, and come to a stop before slamming into a hazard in the curve.

Photo 1 depicts an off-ramp from the Pennsylvania Turnpike in Downingtown, Pennsylvania. The radius of this curve is 270 feet and the curve advisory speed is posted at 25 mph. If a vehicle traverses this 270-foot curve at 25 mph, the calculated lateral g-force is 0.15 g. This would be considered a “comfortable” lateral g-force for a driver traveling through the curve.

Not far from this exit ramp is a section of Pottstown Pike in South Coventry Township. This section was notorious for its dangerous curves and head-on collisions, especially in wet weather. Several years ago, the Pennsylvania Department of Transportation (PENNDOT) undertook a major initiative to reduce the number of serious crashes along this corridor. One of the many initiatives was to clearly post curve warnings and curve advisory speeds along the roadway.

Photo 2 depicts Pottstown Pike just south of Flowing Springs Road. The measured radius of this curve is 516 feet and the advisory curve speed is 30 mph. If a vehicle traverses this 516-foot curve at 30 mph, the calculated lateral g-force is 0.11 g. Once again, this would be a “comfortable” lateral g-force for a driver traveling through the curve. In fact, this lateral g-force is a bit lower than what we might expect. More than likely, PENNDOT posted a curve advisory speed that provides a larger safety cushion for drivers traversing this dangerous road, especially when driving in wet weather.

As we can see from this discussion and the values provided in Table 1, a vehicle that heeds the advisory curve speed will rarely experience more than 0.20 g when traversing the curve at a steady speed. This is an important training point for fire apparatus operators when we consider that the rollover threshold of the average fire apparatus usually falls between 0.50 and 0.60 g. A driver who heeds the curve advisory speed will be able to limit the amount of lateral g-force pushing on the apparatus, which will help maintain a safety margin between the travel speed and the vehicle’s rollover threshold.

Remember that on sharp curves, such as when turning at an intersection, just a slight increase in speed can result in a tremendous increase in lateral g-force. On a sharp curve with a 30-foot radius, which is common for many urban intersections, the difference between 0.2 lateral g and 0.5 lateral g is just 5 mph (Table 2). An increase in speed of just 5 mph could cause the apparatus to roll over while rounding the curve. These scenarios leave little room for error.

When used properly, curve advisory speeds can be an important teaching tool for fire apparatus operators. However, prior to relying on a curve advisory speed, be sure to confirm the actual amount of lateral g-force a vehicle will experience when traveling at the advisory curve speed by contacting your local highway department or driving through the curve in a low center of gravity vehicle that is equipped with a g-meter. This type of training will allow us to preplan our roadways, just as we preplan our buildings, for firefighter safety.

1. American Association of State Highway and Transportation Officials. “A Policy on Geometric Design of Highways and Streets–4th Edition.” 2001. Page 134.

2. American Association of State Highway and Transportation Officials. “A Policy on Geometric Design of Highways and Streets–4th Edition.” 2001. Page 135.

CHRIS DALY is a 22-year police veteran, serving as a patrol supervisor in West Chester, Pennsylvania. He has served 29 years as both a career and volunteer firefighter, holding numerous positions, including the rank of assistant chief. He is an accredited crash reconstructionist (ACTAR #1863) and a lead investigator for the Chester County (PA) Serious Crash Assistance Team. Daly is a member of the Fire Apparatus & Emergency Equipment Editorial Advisory Board. He has developed an emergency vehicle driver training program called “Drive to Survive,” which has been presented to more than 22,000 firefighters and police officers at more than 500 emergency service agencies across the United States.