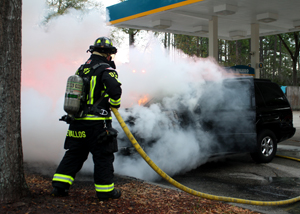 DELTONA, FL—City of Deltona (FL) Fire Department fire apparatus responded to a vehicle fire with structural endangerment at a Valero Fuel Station. Engine 63 and Engine 64 as well as Battalion 61 responded and arrived on scene to find a Cadillac Excalade SUV with heavy fire involvement in the engine compartment.

Bystanders noticed the SUV smoking next to the gas pumps and quickly pushed the vehicle away from the gas pumps while off duty City of Deltona engineer/paramedic firefighter Heather Langston quickly evacuated the Kangaroo Express Store and made sure the emergency fuel shut off valve was activated.

The fire was quickly extinguished and damage was kept within the engine compartment. The cause of the fire was not known at the time and has yet to be determined. There were no reported injuries.