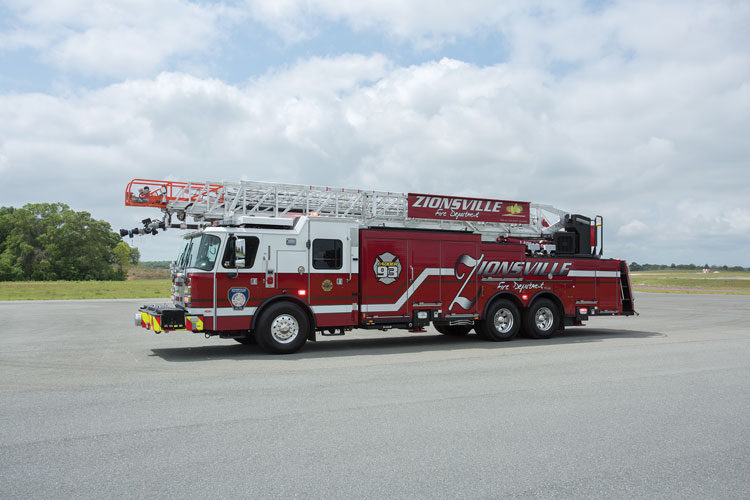 The Zionsville (IN) Fire Department faced the problem of a rapidly growing community in the fastest growing county in the state, where single-family residences and other buildings were set back considerable distances from roadway access, making it difficult to reach many of them with the E-ONE 95-foot midmount aerial ladder the department was running.

“Our midmount, while maneuverable, was causing us difficulty with some homes,” James C. VanGorder, Zionsville’s chief, says. “We were not able to reach the typical home in the community. We would set up and find ourselves short for roof use, and the setbacks and size of the houses were the two biggest issues we were facing.”

VanGorder says that the department’s midmount only had a 300-gallon water tank on it, and he wasn’t comfortable with that size, as well as the problem of reach. “We tried to find a quint that worked for us but were not able to. But, then we sold our midmount before the end of its useful life so we could get a good amount of money for it.”

After a neighboring fire department took delivery of a 127-foot ladder, Zionsville’s truck committee brought in various manufacturers’ rigs with ladders in 100-, 105-, 110-, 127-, and 137-foot lengths to test those products. “We set up at the same addresses and used the same scenarios to evaluate each of them,” Brian Miller, deputy chief of operations, says. “We wanted to see if we could reach the roof line each time and be able to do an effective roof operation. We also looked at whether we could move right or left, up or back with the ladder, and still have reach capability.”

Miller pointed out that the truck committee also considered travel length and setup width of the various aerial ladders they researched. “We wanted to be sure that we didn’t have a vehicle that would close down the whole road with its setup,” he says. “In addition, we also wanted a maneuverable vehicle because a lot of our subdivisions are one way in and out.”

Miller notes that the committee measured placement of the various rigs at the test sites, photographed angles of approach for the ladders, looked at the safety ratios of the aerials, and “essentially studied all the pros and cons of each one.”

The choice Zionsville made was a 2016 CR137 E-ONE 137-foot welded extruded aluminum aerial ladder with a 2.5:1 structural safety factor built on a Cyclone chassis with an extruded aluminum cab with a split raised roof and severe duty interior. The CR137 is powered by a Cummins 550-horsepower ISX 15 diesel engine with a Jacobs compression brake and an Allison EVS 4500P automatic transmission. Miller says that E-ONE’s four crisscross underslung jacks, two at the midpoint of the truck and two at the rear, give solid stability for the rig while using the smallest footprint possible.

Also on the rig is a Waterous CMU 2,000-gallon-per-minute (gpm) pump, a UPF Poly III 500-gallon water tank, all Akron Brass valves with a stainless steel manifold, a Task Force Tips Monsoon 1,750-gpm electric monitor at the tip of the aerial, and two 200-foot 1¾-inch crosslays recessed in a 12-inch-high severe-duty front bumper.

Joe Hedges, E-ONE’s product manager for chassis and aerials, says, “This is a very complex truck. The department wanted to customize it to meet their requirements, which ranged from simple bolt-on items to a custom body configuration with extended-height compartments, enclosed pump panels, the water tank, hard suction storage, custom wheel well compartments, and a through-the-tank ground ladder storage compartment for 127 feet of ground ladders.”

Hedges says that because of all the customization, the preconstruction meeting was a multiday affair that took a lot of effort by the truck committee and the E-ONE team of engineers, designers, and product managers. “Looking at the drawing for the truck and looking at the order made, there were dozens of custom things that we put together on this truck,” he says, “like stainless steel knurled hand rails, a laser at the tip of the aerial, and a special drop bracket brow light across the front of the vehicle that allowed the aerial’s waterway to be notched into the cab roof.”

Jim Castellano, sales manager for Fire Service Inc., who sold the rig to Zionsville, says, “These days, an aerial device is more about reach than height. You might have to get to a 6,000-square-foot house that sits 100 feet off the street instead of getting to a window on a 10-story building.” Castellano notes that the Zionsville aerial “is the most thought-out project I’ve ever had” and congratulated the truck committee and department for their foresight and attention to detail in developing what they wanted the truck to be able to do. “As an example, we had to maximize the hosebed space on this aerial to carry 800 feet of five-inch large-diameter hose and 400 feet of three-inch hose,” he says. “We also had to provide the compartment space for all of the rescue equipment they wanted to carry, developed a customized cab for them, and a transverse compartment for a Stokes basket and backboards.”

The Zionsville crew is pleased with their longer-reach ladder. “We are now able to access a lot of houses that we previously could not get to,” says Jason Potts, Zionsville captain at Ladder Station 93. “And, the proximity sensor lasers at the tip show the distance and elevation from the building, which helps us with the depth perception on such a long ladder.”

Hedges sums up the project by praising the Zionsville truck committee. “They were great to work with,” he says. “They understood there are physical limitations to some of the things they were asking for, but we were able to meet all of their requirements.”