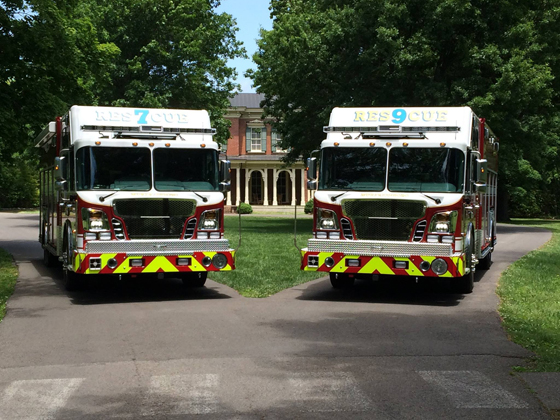 The rescue apparatus feature modular EVI 20-foot nonwalk-in bodies with recessed rooftop compartments and light tower. Each unit features an assortment of shelves, trays, and tool boards; wheelwell speedy-dry hopper; and storage racks mounted within the body for the department’s specialized equipment. There also is a six-bottle cascade system with fill station on each truck.

According to EVI, key components of these vehicles are the extended front bumper compartments that have six Holmatro rescue tools mounted for quick deployment. The tools are powered by a Holmatro electric simo unit mounted in one of the rooftop compartments. Hoses come down to diverter valves in the front compartment. Personnel can run the tools from the front, rear, or both using CORE bulkhead fittings.

The trucks were sold by Lee Potter, sales manager, EVI.

For more information on the rig, visit http://www.evi-fl.com/fsite/index.php/deliveries-all-categories-sidemenu/heavy-rescues/murfreesboro-fire-department-detail.

Cantankerous Wisdom: A Diatribe on Suction Inlets and Custom Cabs