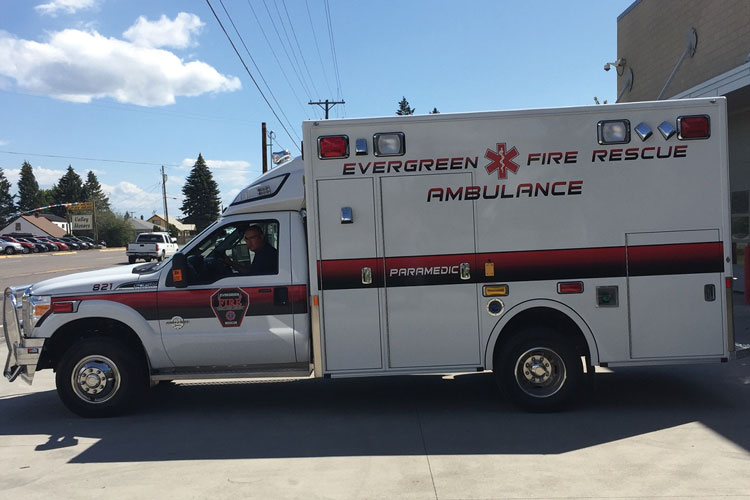 Evergreen Fire Rescue, in Kalispell, Montana, had previously purchased only preowned ambulances for its fleet, all of which had seen service for the federal government as rigs used in the federal penitentiary system.

But when it applied for and was awarded a Montana Department of Transportation (DOT) grant, it was able to apply the money, with a small contribution on Evergreen’s part, to the purchase of a brand new ambulance.

“We put in for the Montana DOT grant in 2015 and got notification of receiving the grant late in the year,” says Craig Williams, chief of Evergreen Fire Rescue. “This is our first brand new ambulance, and we were lucky to receive the grant to purchase it.” He continues, “We then went through the bidding process, and Apgar Ambulance was chosen to provide the Demers ambulance for us. We were comfortable working with Apgar Ambulance because we had previously bought used federal government ambulances from them, going back to when we started emergency medical services (EMS) transport in 2007.”

Steve Apgar, owner of Apgar Ambulance, says the contract was through a Montana DOT safety grant that annually sets aside $1.2 million in federal highway funds to provide ambulances for rural providers in the state. “A lot of these grants are going to volunteer fire departments that have financial constraints,” Apgar observes.

Apgar notes that Evergreen chose some options that were allowed by the state contract to be added to its ambulance. “They chose to have drop-down chains installed, rear backup and interior module cameras, and a Liquid Spring suspension,” he says.

Williams points out that Evergreen wanted a Type 1 ambulance with four-wheel drive, “because we needed a high clearance on the vehicle and had to get into some congested and mountainous areas.” Evergreen also wanted different lighting packages than the standard, he says, “so we upgraded to high-wattage LED lighting because we’re in a rural area and need the additional visibility. We also chose all clear lenses instead of the stock lenses because we felt they were more visible.”

Williams says that the Demers Evergreen Type 1 ambulance is the first ambulance in the county that uses the Whelen Howler™ low-frequency tone siren. “We have been having difficulty getting drivers to yield to us,” he notes. “We have had some near misses in the past, which worried us. The Howler siren has been a huge value for us. It is very different with the vibration it gives out as well as the tone. It has been very successful for us.”

Of the four-wheel drive, Williams called it “absolutely important, as well as the option of the drop-down chains. Because of the need for high clearance, we chose those drop-down chains, which have worked very well for us. We get a pile of snow up here in the winter because we are only about 30 miles away from Glacier National Park.”

Williams adds that a custom brush guard that the department requested also has worked very well. “A week after the delivery of this ambulance, another one of our ambulances struck an elk. If it had had the brush guard in front of it like the new one, it would have saved the rig. The brush guard is very functional and adds a lot of value to the ambulance.”

Apgar says that some of the features unique to the Demers ambulance include a fully heads-up console that’s been endorsed by Ford, Chevy, and Mercedes. “All the switches that control the emergency vehicle are up high in the driver’s vision,” he points out, “as well as some of the nonprimary functions like air conditioning and the radio.”

Also a feature on the ambulance is the cab riser, an aerodynamic riser above the cab that incorporates LED warning lights behind a heavy Lexan shield. “In high-wind states, the wind buffets off of the face of a Type 1 module and slams down on the top of the truck’s hood,” Apgar says. “We call it ‘oil panning’ because it’s like beating on a drum. The aerodynamic cab riser makes for a significantly quieter vehicle and eliminates the buffeting noise.”

In addition, Apgar says, the Demers rig for Evergreen Fire Rescue features an all-aluminum interior and modular fiberglass, along with a full-function multiplexing system. “The air conditioning is ducted across the ceiling of the module,” he notes, “while the heating comes into the floor underneath the CPR side seat to keep the patient and the medic comfortable.”

Electric door locks on all doors are now standard on Demers ambulances, Apgar says, as well as a “rear step up or down” lighted indicator in the back of the module. Also, Demers uses flush-mount windows on the side and rear doors to provide more natural light inside the module. All windows can be tilted to get fresh air inside.

“Every truck comes standard with two separate sets of high-capacity batteries,” Apgar says. “Two batteries in the back, isolated from each other, are specifically for the module, and the other two are for the truck itself.”