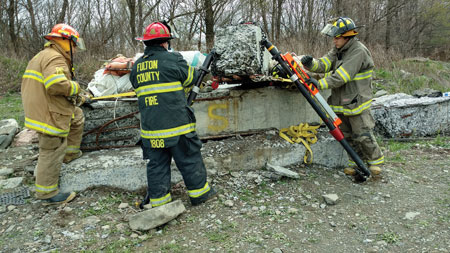 The equipment used by trench rescue, structural collapse, and urban search and rescue (USAR) teams sometimes crosses into what firefighters usually find on rescues and pumpers but more often is specialized equipment designed for a single purpose.

Equipment used by these teams is typically unique to the types of jobs team members must perform to achieve their objectives in what is often characterized as technical rescue.

Tom Gavin, national sales manager for Paratech, says the products his company makes that are most often used in USAR, building collapse, and trench rescue situations are its air bags and its multipurpose struts. “With the struts, which use a thread system instead of a pin, you can change the heads to use the struts for a different type of use,” Gavin says. “You change the head for the discipline-from walls and concrete slabs and trenches to buses, trucks, and cars.”

Gavin points out that Paratech’s gray struts will hold up to 80,000 pounds for a four-foot-long strut, while its gold struts, which are 3½ inches in diameter, can hold 80,000 pounds at eight feet long. “Most fire departments start out with the gray struts, which are sold in our highway vehicle stabilization kits,” he says. “When they want to go really big, they add the gold struts. When you get into USAR and Federal Emergency Management Agency (FEMA) teams, they use quite a lot of gold struts, along with our Raker system.”

Gavin notes that Paratech’s gray struts can telescope out to 11 feet, while gold struts telescope to 18 feet. “The gray base plates we make fit both gray and gold struts, but we also make gold base plates for heavy rigging jobs and high angle rescue.”

Hurst Jaws of Life makes the Airshore series of rescue struts and equipment used in USAR, structural collapse, and trench rescue situations. Airshore Pneumatic Rescue Struts are made in extendable lengths from one foot to eight feet that extend from 1½ feet to 12 feet. Capacities range from 20,000 to 30,000 pounds, depending on the strut.

Chris Pasto, founder and owner of Res-Q-Jack, says that “no matter which strut you’re using for an application, you have to know the load you’re working with and the capacity of the strut that you’re using. Also, you shouldn’t limit your thinking in applying struts because often, instead of one heavy-duty strut, you might use several lighter-duty struts and still effect a good rescue.”

Pasto says Res-Q-Jack also makes the Aluminum X-Strut, a lightweight but heavy-duty pinned stabilization and lifting strut, built from 6061-T6 aluminum. The strut has a working load limit of 10,000 pounds, Pasto points out, with a 2:1 safety factor.

For trench rescue, Res-Q-Jack produces the Super X Trench Shoring System. Made from high-grade aluminum and functioning like a Super X-Strut, the trench shoring system is available in three sizes to accommodate a variety of situations. Lengths run from 26 inches that will support 38,400 pounds to 112 inches supporting 10,420 pounds.

Peter Fiset, regional manager for Holmatro Inc., says Holmatro makes the Power Wedge, a lifting device that is “a hydraulic cylinder that pushes a metal wedge sandwiched between two thin pieces of steel that can fit into a small space. It can lift 50,000 pounds two inches high and is used as a starting tool to insert an air bag into the space. Once the rescuer makes a gap, it becomes an air bag operation and he then goes to another location and creates another gap with the Power Wedge,” Fiset says.

Holmatro’s PowerShore system uses aluminum tubes of different lengths (from six inches to four feet long) that are made as hydraulic, pneumatic, and mechanical struts. “For trench rescue, you’ll usually find the PowerShore being used in air power for wall support,” Fiset says. “For USAR work, it’s usually a mechanical or hydraulic PowerShore that is used as shoring.”

Tim O’Connell, chief executive officer of Rescue 42 Inc., says his company makes a lifting strut that can handle up to 18,000 pounds. “When our strut is extended out to nine feet, it can hold a 4,000-pound working load,” O’Connell says. “Ours is classified as a vehicle, machinery, aircraft, and light structural rescue strut. Our struts are in service with the U.S. Air Force and with U.S. Navy aviation units.”

O’Connell notes that Rescue 42’s struts are made of Kevlar® composite material, “which is lightweight, very strong, resistant to corrosion, and electrically nonconductive.” He adds that Rescue 42 will soon introduce “an all-in-one-strut that’s designed to be quickly deployed for a light stabilization job.”

Holmatro also makes 116-pounds-per-square-inch (psi) lifting bags that range from one ton to 73 tons of lift, Fiset says. “The surface area of the bag restricts the tonnage,” he points out, “and the restricting factor for the bag used is how big the opening is that you can get the bag into.”

USAR teams generally want the biggest lift possible, Fiset notes. “Bigger is usually better, but it becomes a factor of what will fit in the space, so you have to have multiple size bags available. The smallest air bag we make is six by six inches, and the largest is three by three feet.”

In addition to air bags, Holmatro also makes a number of hydraulic jacks that can be used to make lifts. “The advantage to a hydraulic jack is that you can get a lot of lift tonnage in a small area,” Fiset says. “If you can do progressive lifting, you can start with a Power Wedge, then an air bag, then a hydraulic jack, and finally a PowerShore Stabilization system.”

Gavin says his company’s air bags are an “important component in USAR teams. We have bags from six by six inches that can lift 1.5 tons to bags 37 by 37 inches that can lift 89.2 tons operating at 150 psi.” He adds that Paratech makes 14 different size air bags in neoprene rubber with three layers of aramid fiber reinforcing for flexibility. “We use all brass fittings on our regulators, hoses, bags, controllers, and in-line relief valves because they are nonsparking,” Gavin says. “It’s the same with our struts.”

Tom Ruzich, president of Cutters Edge, notes his company makes rescue saws on chainsaw chassis, a multicut saw, and a rotary rescue saw. “Our 2100 multicut fire rescue saw with the carbide-tipped BULLET® Chain is available in two engine sizes-707-cubic-centimeter (cc) and 87.9-cc models,” Ruzich says. “The BULLET Chain will last up to 20 times longer than standard chains, cuts a wide variety of materials, and is engineered specifically for fire and rescue cutting.”

Cutters Edge also makes the CE94 concrete cutting chainsaw that uses a diamond-tipped chain that is lubed with water to clean out the concrete dust during use and lube the chain at the same time. “You can cut a view hole in concrete faster with this saw than you can with a core drill,” Ruzich says. “Three cuts and you have a triangle where the USAR team can drop in a search camera.”

Cutters Edge recently introduced its rotary rescue saw in two models. “The H1 is our stock saw, but the H2 has features specifically designed for the fire service,” Ruzich points out. “The H2 has an air filtration system than filters to a finer micron for fine, dry dust, which is a killer of saws. We use a racing filter coated with oil that will filter to less than one micron, where a typical filter is between seven to 10 microns.” In addition, the rotary saw can take a diamond-tipped blade or a BULLET Chain that attaches to the outer circumference of the rotary blade. “We have yet to find a material we cannot cut,” Ruzich says.

Craig Tobin, vice president of Unifire, points out that his company’s circular rescue saws are popular with USAR teams. “The saws are available in three different power head configurations and blade diameters,” Tobin says. “Our most popular is the Cut-Off Circular Rescue Saw with a 14-inch blade and a six-horsepower, 94-cc engine that features a low-vibration system and a high power-to-weight ratio.”

Unifire makes 12 blades to fit the saw, but the two most often used in the fire service are the diamond-tipped blade and the USAR Blade, both good for dealing with cutting metal and concrete. Unifire also offers rescue saws in other configurations, from 74-cc through 94-cc models and a 119-cc model, in 14- and 16-inch-blade models.

Unifire also makes confined space blowers used by USAR teams to circulate air into collapsed structures for rescue personnel and victims. “We make both explosionproof and standard units,” Tobin points out. “Each model has explosionproof ducting with a polyethylene housing and canister that will pull 830 cubic feet per minute (cfm) for standard models and 900 cfm for the explosionproof version.”

Bud Calkin, president of Skedco Inc., says his company makes the Sked stretcher in various versions. “The SK200 works best in confined spaces,” Calkin says. “It has the option of the Skedco Cobra buckles that are aluminum side-release buckles that won’t open under tension. And, our Half-Sked allows rescuers to get people around corners or out of tight spots.”

Calkin says his company partnered with CMC Rescue to produce the Drag-On Lift Harness, which he called “like a Half-Sked attached to a harness that’s narrower and lighter in weight. It has a plastic sheet on it to prevent wear and is hoistable to a vertical position.”

Joe Flachman, business development director for CMC Rescue, says the Drag-On Lift Harness “is designed to extricate patients from confined spaces where they are not in need of spinal immobilization. It’s a quick load-and-go product where rescuers secure the patient on the Sked sheet, which can be dragged by a single rescuer, carried by built-in handles by up to six rescuers, or extricated vertically.”

Stan Klopfenstein, CMC Rescue school instructor and retired division chief from the Santa Fe Springs (CA) Fire Department, says CMC Rescue makes a trench belt for securing rescuers on ladders when they are working in trenches. “It’s a National Fire Protection Association-compliant belt that allows the rescuer to put a pouch over it for a hammer and nails or other needed equipment,” he says. Klopfenstein was the lead for a working group at CMC Rescue that published a student curriculum manual for trench rescue.

CMC Rescue also makes life safety ropes, bags, carabiners, webbing, and technical rescue gloves, all of which are typically used in trench rescue and in some structural collapse and USAR situations.

The Challenges of Hazmat Responses