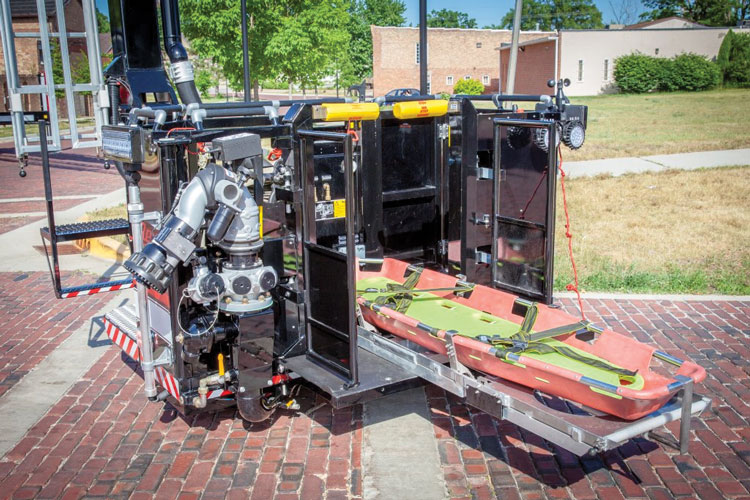 Depending on your department, you’re operating your aerial with a clean, uncluttered ladder or platform; one that’s carrying as many pieces of equipment as it can safely; or a configuration somewhere in between. And in some departments, there is relatively atypical equipment being put at the ends of aerials.

Paul Christiansen, aerial sales manager for Ferrara Fire Apparatus Inc., says that a rescue pulley system is becoming a popular feature at the tips of ladders and platforms. “With our system, one part attaches at the tip of the fly section and the other half at the turntable section, allowing firefighters to do a high-angle rope rescue,” Christiansen says. “We also have done a few aerials with thermal imaging cameras at the tip, where the image shows up on a monitor located at the pedestal, at the pump panel, or in the cab.”

Ferrara also has installed the Command Light L-CAS (laser collision avoidance system) at the tips of ladders, Christiansen notes. “There are two green beam laser assemblies at the tip, and each laser has three beams,” he says. “When the ladder is a long way from the building, the beams are far apart and projecting onto the side of the building; but as the tip moves closer, the beams get closer together and merge into a single point when the tip is near the building. It gives the operator depth perception and is used mostly at night when there is limited visibility.”

Tim Smits, senior manager of national sales and product support for Pierce Manufacturing Inc., says Pierce has been putting a lot of LED lighting and cameras at the tips of ladders and on platforms. “The camera system can be as simple as a backup-type camera or an INTEC camera (INTEC Video Systems Inc.) that can give a 360-degree view of the scene,” Smits says. “We’ve even put an INTEC on a telescopic pole mounted on a platform. With lighting, we’ve been installing LED lighting bars along the sides of platforms to allow the operator to light up a roofline.”

Pierce also offers basket sensors on the bottoms of platforms that function like a backup alarm, giving warnings at 10, five, and three feet away from an obstruction, Smits points out. “We’ll often pair that with a camera that can wirelessly transmit images to a chief’s car or an incident commander. We’ve also put wind speed alarms on platforms that display information both in the platform and at the pedestal. Usually it’s set for 30 miles per hour (mph), which illuminates an amber light, and when the wind speed hits 35 mph, the light goes to red and an alarm goes off.”

Other equipment Pierce has installed on platforms includes preconnected hoselines from a 2½-inch discharge with a butterfly valve off the monitor to allow a line to be extended to a roof as well as a dual pulley rope rescue system for ladder tips and platforms. “Pretty much anything a customer wants in terms of accessories up there, we can do it,” Smits says.

Dave Rider, director of global product management for Smeal Fire Apparatus, says fire departments generally want “a whole toolbox of axes, halligans, pike poles, and other equipment, especially on their platforms” but cautions “you have to balance how much equipment you put up there and what it does to affect the aerial’s tip load.”

Smeal offers a 2½-inch discharge inside a platform that takes a gated wye or a hoseline and also offers a discharge outside the platform through a Task Force Tips VUM (valve under monitor). Smeal also installs parapet ladder brackets, Stokes basket holders and brackets, and compact electrical cord reels on platforms. “These have become pretty standard on our platforms,” Rider says. “I wouldn’t build a platform without them. With the cord reel on the platform, it allows firefighters to use a circular saw on a roof or run a tripod light either above or below grade.”

Joe Hedges, product manager for chassis and aerials at E-ONE, says that manufacturers have to carefully plan for the specific amount of equipment a fire department might want at a ladder tip or platform to maintain the aerial’s structural design stability. He notes that some fire departments are getting concerned about the amount of equipment being mounted inside the fly sections of ladders and are requesting that gear be moved down around the base section. “We want to work with the department to put the best truck possible together for them,” he observes.

Hedges says E-ONE typically will locate wall and roof ladders on the outside of an aerial and a Stokes basket usually outside the base section or on a side plate. “We have a three-position mount that can store a Stokes on the left, right, or rear of a platform,” he adds. “Plus, we offer lifting eyes to tie off ropes at a ladder tip and below a platform, with the base section having heavy-duty eyes.”

Breathing air is being installed on 95 percent of the platforms that E-ONE builds, Hedges points out, and E-ONE puts plenty of LED warning and scene lighting at ladder tips and along the outsides of platforms. “A few times, we installed LED bar-type lights 20 inches wide under the tip of a ladder and also have done a couple of 10-inch bar lights on the outboard sides,” Hedges says. “These were double row strip-type LEDs from Rigid Industries that provide a tremendous amount of light that give the added advantage of not having large lights hanging off the fly section that make it difficult to maneuver through trees and other obstacles.”

E-ONE also has installed a dual monitor on a platform where a monitor occupied one side with the other end being a four-inch large-diameter discharge. “The department expected to have to set up at a highway overpass at ground level and extend the aerial up to the overpass to feed a water supply up there,” Hedges says. “We’re also seeing an upswing on the use of ladder tip controls on straight ladders.”

Hedges says that E-ONE has installed Command Light’s L-CAS on a number of aerials as well as cameras where the signal is wirelessly transmitted to a portable case holding a receiver and monitor, which can be taken anywhere on the ground away from the aerial. “We had one department that wanted a mount to hold a chain saw at the fly section of the ladder,” he says. “They stored the chain saw in a box at the base of the aerial, and if they needed a vent, they took the saw up with them and then had a holster to hold the chain saw once they finished with it.”

Brandon Whittaker, aerial specialist for Rosenbauer, says his company allows for 75 pounds of equipment on platforms, exclusive of the tip load. “We’re seeing a lot more LED lighting on platforms and aerial tips,” Whittaker notes, “and with straight sticks, we are putting in chain saw mounts, multiple pike poles, and Sheetrock® tools. Down at the turntable, we’re mounting boxes to hold the chain saw and K-12 saws.” Whittaker adds that on one of Rosenbauer’s T-Rex articulating platforms, it installed electric-over-hydraulic extrication tools in the basket.

Randy Hummer, aerial sales manager for Spartan Emergency Response, says most customers don’t want large halogen 120-volt lights at the tip of an aerial anymore but are moving toward the smaller 12-volt LED light heads. “A lot of times there can be a lot of clutter on a platform or a ladder tip,” Hummer says. “Fire departments always want more, but our first thought is safety to decide if something can be added in a safe manner for firefighters and rescue victims.”

Spartan designed a rope roller for the fly end of its straight ladders where receivers are welded onto the tip, Hummer notes. “You put the device on them and it keeps the rope centered on the ladder and doesn’t divert to the left or right,” he says. “We also weld receivers onto our platforms to securely anchor a Stokes basket, a rescue arm, or a parapet ladder and are seeing more requests for cameras at the tips, about 50-50 video and infrared.”

A common request that has become almost standard on straight sticks and platforms is a gated valve, 2½-inch or smaller, at the tip to connect a handline, Hummer says. “We encourage a small gate valve on the inside of the platform where a small tray on the center-front section holds about 10 to 20 feet of hose,” he says. “And over the years, we have been asked for a power winch on a platform, but after looking at the dynamic loads that can be transferred back into the aerial, we have not done them for safety reasons.”

Jim Garver, engineering manager for Sutphen Corp., says Sutphen has been installing more sophisticated digital video and thermal imaging camera systems on aerials. “We did a digital video and thermal imaging system on the ladder tip for the Green Village (NJ) Fire Department where the signal went to a DVR recorder at the base of the truck and was able to wirelessly transmit its data back to the fire station,” Garver says.

Sutphen is getting more requests for handline connections in platforms, Garver notes, where the waterway serves a monitor and a 2½-inch swivel elbow for the handline. But the most unusual item that Sutphen was asked to install on an aerial was a surfboard, Garver says. “A coastal Florida customer wanted a surfboard to be used for water rescue stowed on end behind the boom sign on the side of their straight stick ladder,” he says. “It is the strangest thing we’ve ever put up there.”