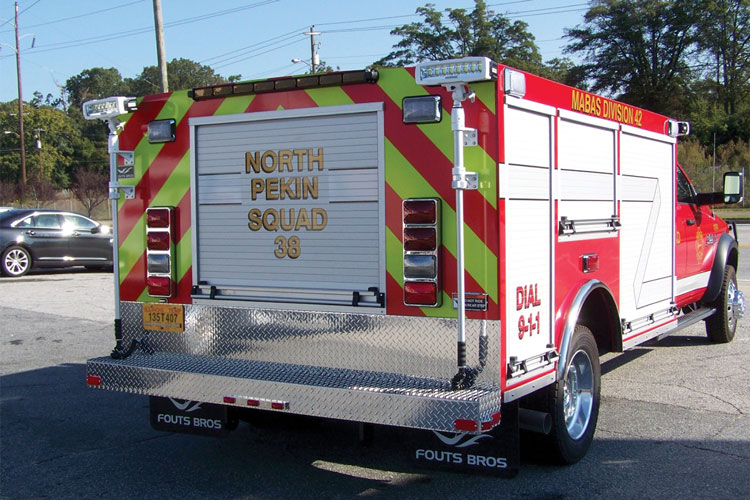 Depending on what part of the country your fire department is located, you probably have a preference for a certain type of body material for your fire apparatus. It might be aluminum, stainless steel, or copolymer.

But, one thing is certain – the choice of body materials will have a major effect on the vehicle’s life, performance, and durability.

Andrew Lingel, president of United Plastic Fabricating (UPF), says the bodies UPF makes for the fire service commonly are used on tankers, pumper-tankers, mini pumpers, Type 1 pumpers, and rescue trucks. “We started designing our first formal PolyBodies® in 1994 as a utility body, while before that we were making body components like compartments and trays,” Lingel says. “This past December, we celebrated our 30th anniversary since UPF started building Poly water tanks, and 2016 was a year when we built the most PolyBody units for the fire industry that we’ve ever done.”

Michael Ashley, UPF’s vice president of engineering, says UPF’s PolyBodies are a copolymer of polypropylene and polyethylene. “We use hot gas fusion welding to weld the plates together and also use extrusion guns using air and/or nitrogen to preheat the parent material. The rod heats up and gets molten into the joint, welding the panels together,” Ashley points out. “We also use a hot knife and pressure to fuse panels together where appropriate.”

Lingel notes that the biggest benefits of a copolymer fire truck body “are that they will never rust or corrode; have very good impact resistance so they avoid dents, dings, and minor repairs; and hold their beautiful finish a lot longer.”

Ashley adds that PolyBodies are about the same weight as a typical aluminum fire truck body. “However, there’s a weight savings over steel, stainless steel, and fiberglass composite bodies,” he says.

Tim Dean, president of Pro Poly of America Inc., says his company created the PolyBilt® limited liability corporation with W.S. Darley & Co. in 2000. “We have been in business 25 years, and our bread and butter has been water tanks,” Dean observes, “but 15 years ago we put our heads together with Darley and decided to make the entire back end of a fire truck out of copolymer. Our Polyprene™ is a special blend of monomers, a polyethylene and polypropylene blend, that form the copolymer.”

Dean notes that Polyprene “gets its high tensile strength from polypropylene and its impact resistance from polyethylene.” He says that Pro Poly has “anecdotal evidence that our bodies are about the same weight as aluminum but have a superior impact resistance.”

Pro Poly is able to put different colored resins into its material, Dean adds, “that produce a nice looking color throughout the material and not only on the surface. But, it doesn’t paint very well, so use the coloring for custom trays and racks inside the body and not on the outside surfaces.”

Chad Falls, director of sales for APR Plastic Fabricating Inc., says his company also makes bodies out of copolymer material made from polyethylene and polypropylene mixed together. “We build to the American Welding Society standard, and it’s the thickness and penetration of our weld that set our product apart,” Falls says. “We use a thicker material – the majority of the time it is ¾ inch at least – which allows us to get a thicker weld and also prevent any waviness in the side of the body.”

Falls notes that unpainted plastic bodies are only ultraviolet (UV) light protected. “Any color will chalk and fade, so we don’t use colored plastic,” he says. “Our bodies are designed to be painted. And, the bodies will usually outlast the chassis of the fire vehicle.”

APR is aware of two fire truck wrecks that had its bodies, he notes. “One was a flat-sided tanker that was T-boned by a midsize car at 35 miles per hour,” Falls says. “The car was totaled, but the fire truck only needed to have a piece of aluminum on a roll-up door replaced, and it didn’t damage the body at all.” The second reported wreck was an elliptical tanker rollover, he adds. “They brought the tanker back to us and the body and its welds were solid except that we had to reweld a light bracket,” Falls points out.

Tom Leckband, national sales manager for Maintainer Custom Bodies (MCB), says MCB has been building fire vehicles for 40 years, including all types of rescues, quick-attack trucks, urban interface pumpers, wildland crew carriers, hazmat rigs, and command vehicles. “Fire truck bodies have always been aluminum for us,” Leckband says. “We’ve experimented from time to time with stainless steel but decided not to offer it in our bodies.”

Leckband notes that MCB likes aluminum for bodies for several reasons. “The biggest one is that we’ve had very good luck with aluminum in defeating corrosion,” he says. “In the winter, there are a lot of chemicals and salt on roadways, and in the Midwest, South, and East Coast, you can get a lot of humidity. Aluminum holds up very well against corrosion in those kinds of conditions.”

MCB recently delivered a rig to a fire department to replace a truck it had built for the department 23 years ago. “The truck’s aluminum body was faded and showing its age,” Leckband says, “but it was still in really good shape, with solid seams and body work.”

Brent Wilson, sales manager for Crompion International, says Crompion is a distributor of specialty stainless steels and that its flagship grade Cromgard C12 is used and specified in the building of many apparatus. “Commodity stainless steels such as 304/304L contain roughly 18 percent chromium,” Wilson says, “while Cromgard C12 has 10.5 to 12 percent chromium. There is no need for the use of higher chromium stainless steels when the metal will be used as panels and painted. Furthermore, Cromgard C12 is 85 percent stronger than 304 stainless, which is significant and as a result cabs and bodies built out of our grade are much tougher.”

Wilson says that all stainless steels derive their corrosion resistance from the element chromium, and any steel containing 10.5 percent or more chromium is defined as a stainless steel. Chromium in stainless steel results in the formation of a thin non-porous chromium oxide film, he notes, which acts as a barrier to protect the underlying metal against further reaction with the corrosive atmosphere. As long as oxygen is available to the steel surface, any damage to this tightly-adherent passive film will reform itself almost immediately thus maintaining its protection, Wilson says.

“Because Cromgard C12 is exponentially stronger than type 304 stainless steel, manufacturers can reduce the gauge used for their fire truck bodies, which can reduce the overall weight of the apparatus,” he adds. “This reduced thickness can equate to an overall weight savings of 600 pounds or more for a piece of fire apparatus and can mean greater fuel economy or that the truck can be designed with more compartment space.”

But in the end, the choice of materials in fire truck bodies is a decision made by the fire department either through its specs or in consultation with a manufacturer. Falls says he’s seen a trend of copolymers making strides in the United States fire industry. “Their use is only about 20 to 30 years old in the United States,” he says, “but copolymer bodies have been in use in Europe for much longer. And, we’re seeing greater acceptance of these bodies in this country today.”