A number of different types of emerging technologies are affecting the fire service in general and its apparatus and equipment specifically.

IDEX Fire & Safety introduced Captium earlier this year, which it calls “the first-ever connected vehicle platform built specifically to meet the unique needs of fire and emergency medical services (EMS).” Jeffrey Zook, IDEX marketing manager for connected solutions, says that IDEX heard from apparatus users that they wanted to be able to access all the electronics being used on a truck on a single platform to increase their apparatus uptime. “We developed a new piece of hardware to be the backbone of the system, essentially the central brain for all the different vehicle networks, like the pumps, valves, pressure governor, engine, and multiplex network, which all plug into the brain,” Zook says.

At the same time, IDEX worked with Microsoft to build cloud access for all the data captured by Captium. “Not only did it have to be captured and stored, it also had to be available in an accessible fashion,” Zook points out. “The third part of the system is presenting the information to users, which is the dashboard at Captiumconnect.com. Users log into their accounts, which they can access by a laptop, tablet, or mobile device.”

Zook says that Captium is meant to be a passive experience. “You don’t have to look at the truck data daily,” he says. “If the truck has no diagnostic alerts, you don’t need to check. However, if you press a button on the truck and something doesn’t turn on, Captium will identify the issue and alert you to what is going on.”

He points out that Captium is a turnkey cellular-based product that is furnished with a cellular capability built in for a certain period of time. “The modem uses a SIM card prepositioned for AT&T cellular in the United States and Rogers Wireless in Canada,” Zook says. “And, Captium is an open architecture system that will function with other manufacturers’ software. For example, REV Group’s AXIS™ is building on the Captium platform. We want Captium to be the integration point for fire departments.” 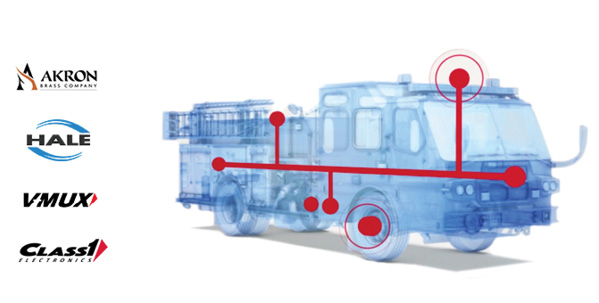 AXIS can be accessed from any computer, laptop, or mobile device, Hedges notes, allowing a viewer to get vehicle information through a Web-based dashboard. The user also can look further into specific truck data and diagnostics, monitor up to five vehicle networks, send remote updates to multiple components, and send real-time vehicle notification via text or e-mail to mobile devices. “Our biggest goal is maximum uptime on the vehicle,” Hedges observes. “We don’t want them going out of service, so by getting and processing the vehicle information, early warnings can be set up to allow predictive maintenance based on past data from the vehicle. And, we can push information about what’s wrong to not only the fire department but also the mechanic who works on the rig so he can get the necessary part and make arrangements to replace it without taking the truck out of service.” 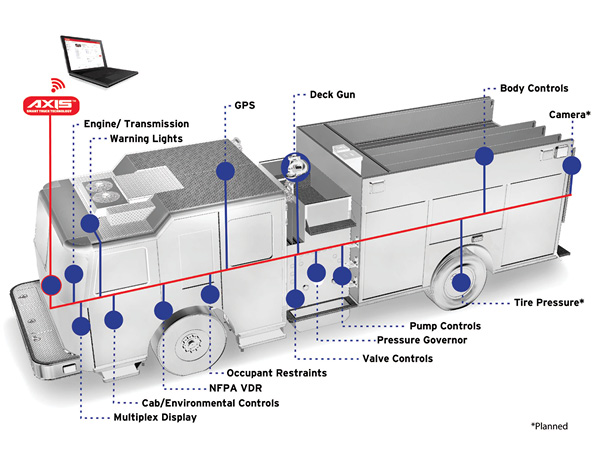 Hedges says that in the future, an AXIS-equipped fire apparatus could become a hub to the Internet of Things (IoT). “Cameras, drones, and other connected electronic things could be integrated into the data, and once the truck is connected to the Internet, it can be the hub to collect that data.” Hedges says that AXIS communicates through cellular and has its own built-in modem and cell service. “There’s a small antenna on the roof, and the system comes with five years of data provided through AT&T,” he says. “We chose cellular instead of WiFi because with WiFi you need to be near the receiving antenna, which isn’t the case with cellular. Also, AT&T has the ability to adapt to cellular changes and has Rollback, where it can use different networks if necessary—for instance, GSM bands, 3G, 4G, and LTE.”

Pierce Manufacturing recently expanded its Command Zone™ advanced electronics architecture with the addition of CZConnect, a fully integrated telematics system featuring a customized vehicle readiness report that contains vehicle performance data and maintenance interval information. Jason Anibas, senior chief engineer for Pierce, says extracting data from vehicles “adds value in the realms of safety, readiness, predictive maintenance, and optimizing lifecycle planning activities. CZConnect tells departments how their vehicles are being used so they can make decisions based on that data.”

CZConnect functions along with the existing CZControl and CZDiagnostics branches of the Command Zone system, Anibas says, “making it the first fully integrated WiFi-based telematics solution available in the fire industry.” An onboard telematic control unit (TCU) continually monitors the engine, transmission, brake systems, fluid levels, system voltage, operating hours, vehicle location, and status of Command Zone input/output while the apparatus is performing its daily activities, Anibas says. Apparatus and GPS data are pushed from the vehicle each time it autoconnects to a known WiFi network. Data analytics is performed, and a customized report is generated and designed to be viewed on mobile devices. Anibas notes that a vehicle readiness report also can be requested at any time from the vehicle display.

“Our goal is to make the vehicle readiness report simple and intuitive while still adding value,” he says. “Each of the report category headers provides a visual indication if there is an action item contained within. Each category can be expanded or compressed to reveal the amount of information desired by the customer.” He notes that CZConnect is available on any Pierce fire truck equipped with the Command Zone Advanced Electronics System.

Ken Lenz, vice president of engineering at HME Inc., says HME introduced its Hydra Technology, which is an exclusive pump module design capable of delivering maximum water flow along with optimal versatility. He says the system’s stainless steel piping, valves, panels, and framework were engineered to provide years of durable, trouble-free service and easy maintenance, while its aircraft-quality valve controls offer the maximum in efficiency and ergonomics as well as smooth and trouble-free linkage for valve operation. He notes that HME Hydra Technology components can be configured to offer optimal ergonomics and operator efficiency and that its compact design allows for more space for equipment, water, and essential gear. 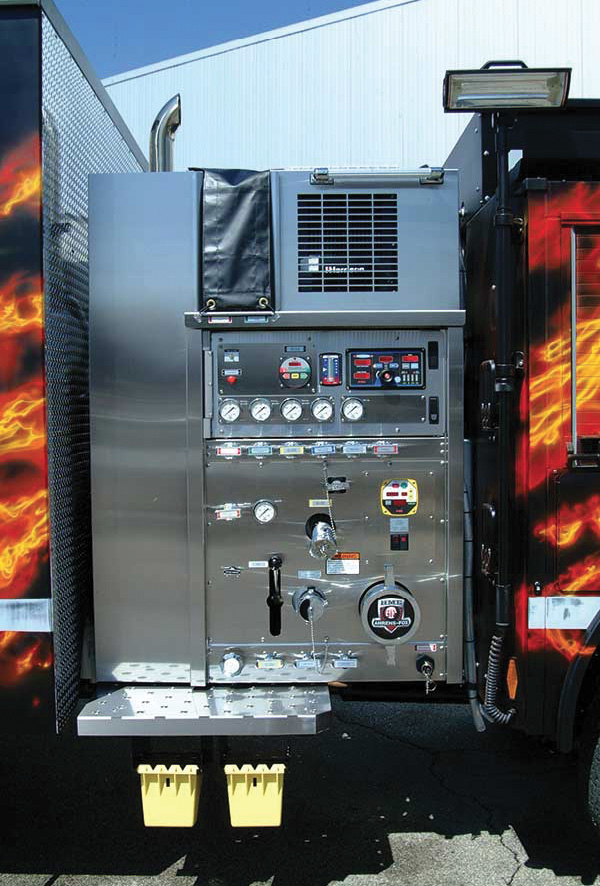 Noah Levins, marketing director for HAAS Alert, says his company makes a product that is focused on helping alert drivers when emergency service vehicles are en route running emergency lights and sirens. “HAAS Alert sends an alert to the dashboard in a WAZE Smartphone navigation aid,” Levins says. “We are working with multiple auto manufacturers to build in the system that will advise when emergency equipment is on a scene and whether an emergency vehicle is approaching from behind, the front, left, or right.”

Levins says the company has a device the size of a deck of cards that is attached in an emergency vehicle that will allow civilian vehicles to detect, in real time, when the emergency vehicle has its lights activated nearby and broadcast the rig’s location. “The system works on any age fire vehicle,” he says. “We recently installed it on a 30-year-old American LaFrance pumper, and it works fine.”

Jason Cerrano, business line leader at Phantom Controls, a unit of IDEX Fire & Safety, says the Scene Apparatus Manager (SAM) is a fully automated fire pump system operated by a touch screen on the vehicle or from a tablet. “SAM is connected to the same electronic network that has always been on fire trucks, talks to this network, and makes the same changes a real person would if they were standing at the pump panel,” Cerrano says. 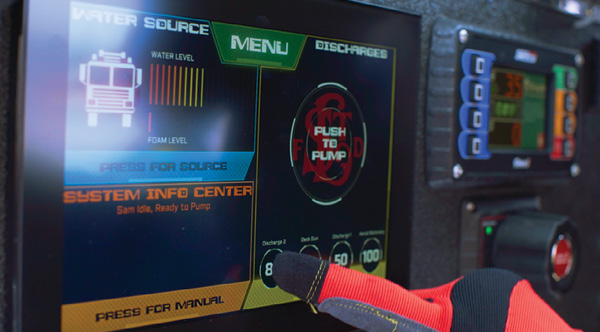 6 Phantom Controls is developing the Scene Apparatus Manager (SAM), a fully automated fire pump system operated by a touch screen on the vehicle or from a tablet. (Photo courtesy of Phantom Controls.)

SAM is programmed to open and close valves, set the pressure for the pressure governor, select intakes for water supply, and alert the crew if there are any problems, Cerrano notes. “SAM monitors all aspects of the pump operation constantly,” he says, “and the operator can move away from the truck and always stay in touch with SAM through a tablet.” Some of SAM’s advantages, Cerrano points out, include the operator moving freely around the scene to perform manual tasks; the operator working from a protected location during road incidents; increased visibility for the operator at all incidents; decreased radio traffic between the operator and crew pertaining to water flow; and steady pressures, less water hammer, and less pressure dumping when pumping multiple lines.

Jason Traynor, global product business director for respirator protection and fire helmets at MSA, says the MSA Hub serves as a data collection point to capture information from sensors on MSA’s G1 SCBA, including physiological data, into a secure cloud data storage area. “Hub is a cloud-based solution that allows incident commanders to evaluate and manage multiple situations at one time from anywhere,” Traynor points out. Hub is both hardware and software with a receiver, usually mounted in an apparatus, that catches a long-range radio signal from the SCBA, he says, and then transmits the data to the cloud. 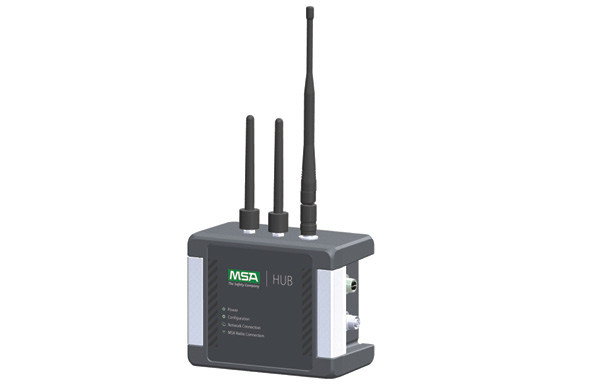 7 The MSA Hub is a data collection point to capture information from sensors on MSA’s G1 SCBA and transmit it to a secure cloud storage area. (Photo courtesy of MSA.)

Traynor says the system currently monitors air remaining in the SCBA; has two-way notifications on evacuations, alarms, or Maydays; calculates air time remaining if a firefighter alarms it; and has the ability to transmit thermal images outside the structure. “We are working on gas detection sensors, which could provide area monitoring around the truck, determine what level of respirator protection is needed on the scene, and where the perimeter should be,” he adds. “There would be an array of sensors that talk with the Hub, take continuous readings of the environment, and transmit that data to the Hub and into the cloud.”

Sam Cossman, chief executive officer and cofounder of Qwake Technologies, says Qwake is introducing C-Thru, an augmented reality system that allows firefighters to see through a smoke-filled environment while wearing an SCBA face piece. Cossman says that C-Thru consists of augmented reality lenses worn like glasses under an SCBA face piece that project green-outlined images relayed from a high-speed thermal imaging camera. The images also are sent in a data stream through a control module wired to the camera and then live streamed to a command and control station, as well as into the cloud for storage.

8 Qwake Technologies is developing C-Thru, an augmented reality system that allows firefighters to see through smoke-filled environments and transmits live data of their view to a command and control station. (Photo courtesy of Qwake Technologies.)

“The system features edge detection, hot spot identification, and fire event recording,” Cossman says. “What the firefighter sees in the field can be streamed to any command and control place, where the incident commander can view either a single firefighter’s view or views from multiple firefighters. C-Thru also functions as 3D mapping as firefighters move through smoke-filled areas.” Cossman adds that C-Thru has been field tested with the Menlo Park (CA) Fire Protection District and that the next iteration of the augmented reality glasses will have a single optic lens in front of one eye and a lens showing a natural view for the other. 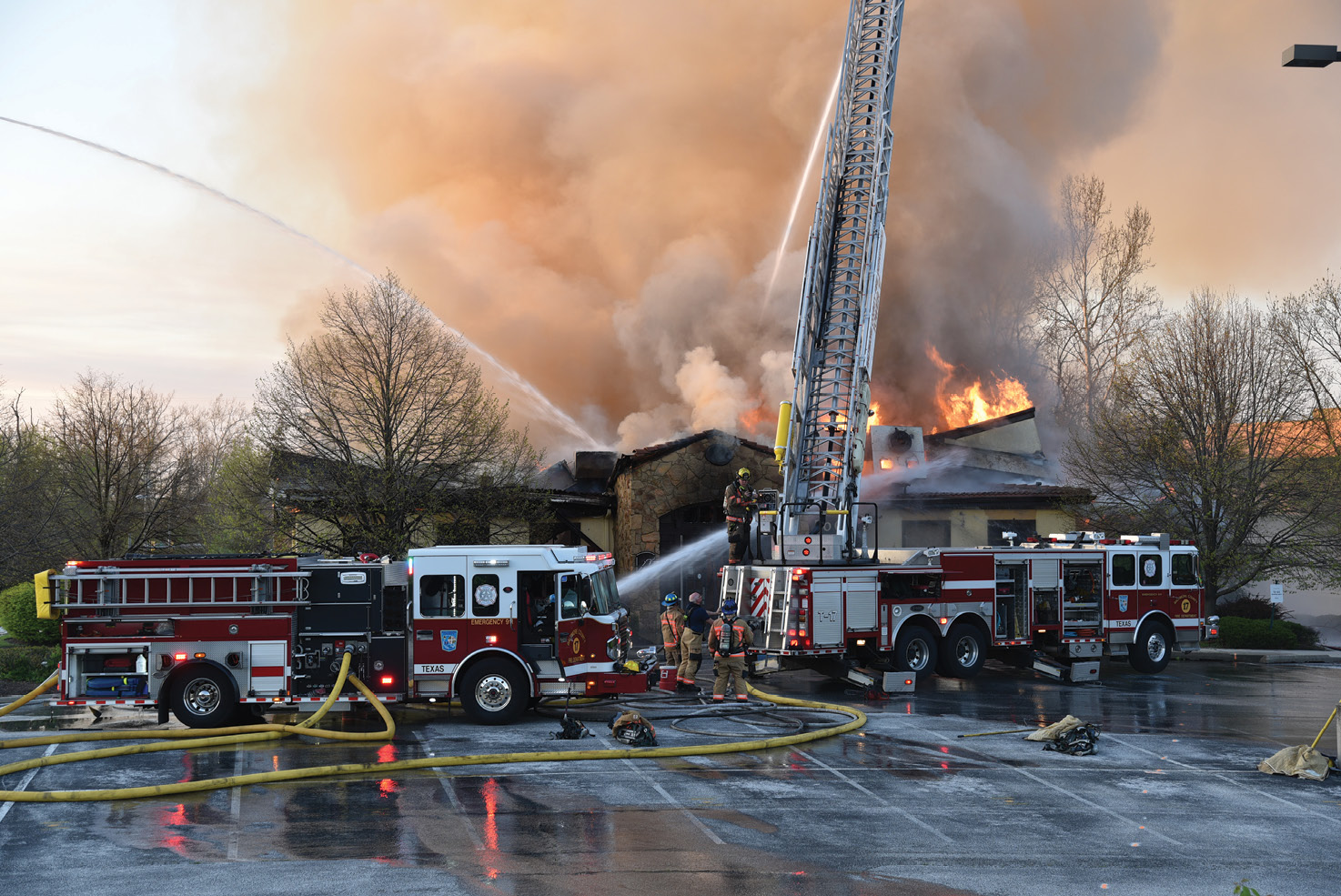 Baltimore County (MD) Fire Department Engine and Tower 17 responded to a working fire in a vacant building. Firefighters initially attempted an interior attack but withdrew after a few minutes and began an exterior defensive attack because of heavy fire conditions and an unstable building. Engine 17 is a 2013 Rosenbauer/Spartan 1,500/1,000 pumper. Tower 17 is a 2004 E-ONE Cyclone II 95-foot tower. (Photo by Michael Schwartzberg.)

Proposed Settlement in the Works for American LaFrance Workers