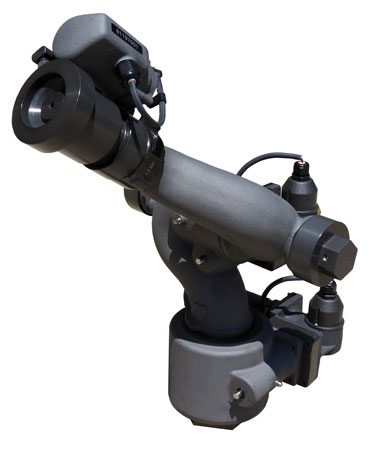 Elkhart Brass Co. and Tyndall Air Force Base, in Florida, have partnered for more than a dozen years to develop monitors, nozzles, and ultra-high-pressure (UHP) pumping systems that might signal the future of firefighting.

Paul Albinger, director of government sales and fire protection systems for Elkhart Brass, says the company began its association with Tyndall Air Force Base in 2004 when an Air Force Research Laboratory (AFRL) staffer at Tyndall, Doug Dierdorff, Ph.D., approached it about modifying an Elkhart Brass monitor for use in a high-pressure pump and aqueous film forming foam (AFFF) delivery system for aircraft rescue and firefighting (ARFF) responses. “We made the Sidewinder, which was originally a wildland monitor,” Albinger says, “that typically flows 125 gallons per minute (gpm) but can flow up to 500 gpm. The Air Force wanted to take that 125-gpm flow rate and knock it down to 30 gpm with a nozzle pressure of 100 pounds per square inch (psi).”

Albinger says that the goal of the project was to develop a very effective ARFF firefighting system that reduced the amount of agent needed to extinguish an aircraft fire. “So, we started a grassroots program to develop a series of products for them and tweak those products to provide ultimate solutions to the challenges faced,” he says.

In fewer than 12 months, Albinger points out, Elkhart Brass engineers and technicians reconfigured the Sidewinder into a monitor that could handle the pressure and flow combinations that the Air Force required as well as developed two handline nozzles-one that flows 1,500 gpm at 1,000 psi and a second that flows 20 gpm at 1,000 psi.

Eric Combs, marketing manager for Elkhart Brass, notes that redesigning monitors and nozzles for ultra high pressures presents a number of obstacles and challenges. “Taking a monitor that’s designed to operate at 100 psi and increasing it to 1,500 psi creates extreme forces that you typically would not see,” Combs says. “So instead of using ball bearings, we added thrust rods and thrust bearings in the monitor. A stainless steed rod is inserted through the joint and the additional thrust bearing allows the monitor to have higher motor loads and an easy swivel action.”

Albinger adds that another challenge in the monitor development centered around developing tight nozzle orifice tolerances and high repeatability. At such high pressures and flow rates, the orifice size on a standard nozzle would provide too low a flow rate, he says, which required Elkhart Brass to redesign that sensitive component.

Combs points out that the technical advancements that Elkhart Brass was able to develop through its cooperation with Tyndall Air Force Base ultimately found their way into Elkhart Brass’s EXM line of fire monitors. “This technology is now included in our entire EXM product line for the fire service,” Combs says. “The Sidewinder, Cobra, Scorpion, and SkyStream EXM all feature thrust rod and thrust bearing technology.”

The end result on the Air Force’s side of the partnership was the introduction of the P-34 rapid intervention vehicle (RIV) that deploys the UHP technology in an ARFF application. It is the first vehicle in the Air Force’s fleet of firefighting vehicles to be equipped with UPH technology, and Air Force research with Elkhart Brass shows a 300 percent improvement in firefighting efficiency over a conventional ARFF vehicle equipped with a low-pressure foam application system.

The P-34 RIV uses a four-stage, high-pressure centrifugal pump powered by a Deutz 174-horsepower (hp) six-cylinder air-cooled diesel engine and has a 400-gallon water tank, a 55-gallon foam tank, an electronic foam proportioning system with concentrations from zero to seven percent, and an Elkhart-Brass-designed bumper-mounted turret nozzle that flows 60 gpm at 1,350 psi and is operated remotely from the cab through a joystick. The rig is built on a Ford F-550 chassis, has a 19,500-pound gross vehicle weight rating (GVWR), and is set up for pump-and-roll capability.

The P-34 RIV can use either Class A or Class B foam to fight a fire, depending on the type of fire. Class A foam can be applied at one percent concentration for wildland fires, while AFFF is applied at six percent concentration in aircraft crash and rescue operations to give a more fluid and stable foam blanket, according to the Air Force. The P-34 RIV costs the Air Force about $160,000 a unit, compared to its predecessor, the P-19, which cost more than $500,000.

Combs says that the Air Force presented Elkhart Brass with requirements for position feedback information from the monitor it developed. “Instead of proximity sensors that let you know when you are at the limit of travel, we use absolute position sensors,” Combs points out. “These sensors allow the monitor to perform multiaccess oscillation, where both horizontal and vertical rotation can be put into the oscillation feature. You also can program in block-out zones, for example, where you might have a light bar near the monitor and want to avoid pointing in that area.”

Albinger adds that the Elkhart Brass monitor development also required it to come up with high-strength, high-torque motors where the motor speed is programmable in either a rapid or slower mode, depending on how far the monitor is being operated from its target. “All of that technology,” he says, “is included in our EXM fire monitor line.”