Hilly terrain and many tight and congested streets and alleyways made the case for the San Francisco (CA) Fire Department to specify a specially designed engine with the shortest wheelbase possible and also the tightest turning radius.

The department got exactly what it wanted from Ferrara Fire Apparatus. The manufacturer recently delivered eight streamlined, compact pumpers to San Francisco that allow the department to better negotiate congested streets and alleys and handle the city’s hilly terrain.

Anthony Rivera, assistant deputy chief of the San Francisco Fire Department, says the department has unique needs for its vehicles. “We need higher horsepower (hp) and higher torque engines because of the steep hills,” Rivera points out, “and we also need our vehicles to have a higher angle of approach and departure for the same reason. We have a minimum requirement for ground level clearance too because any components hanging below a certain height will get ripped off when going up or down hills.”

Another issue facing the department, Rivera says, was extremely narrow alleyways filled with 100-year-old wooden multiresidential units, so the department needed to have engines with short wheelbases and overall lengths that could negotiate those difficult areas. 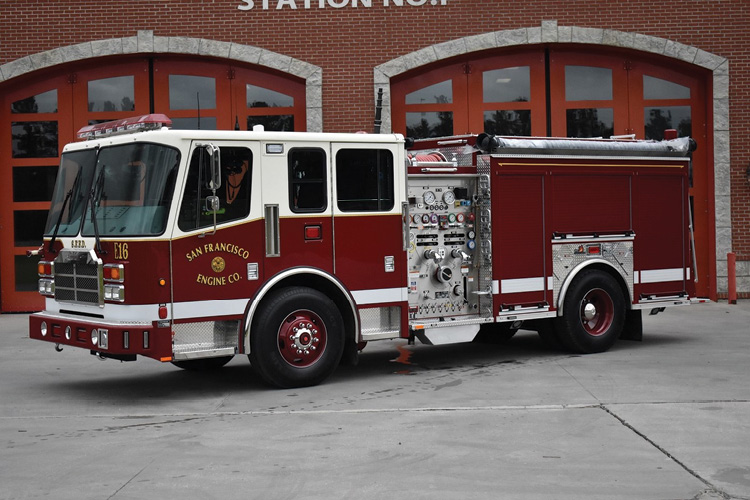 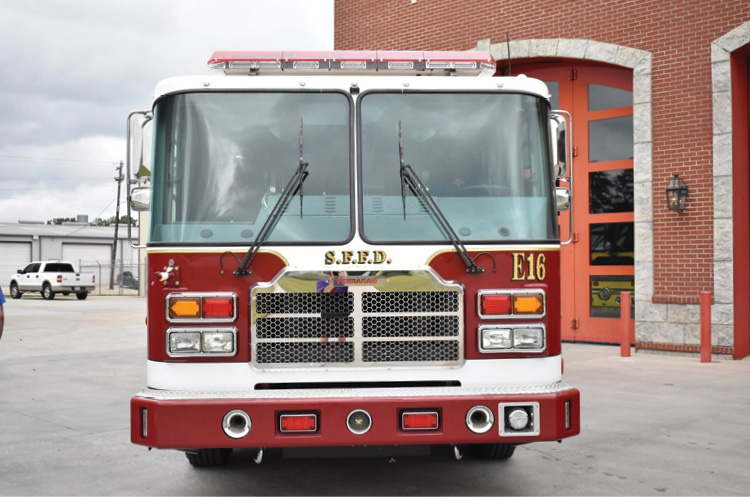 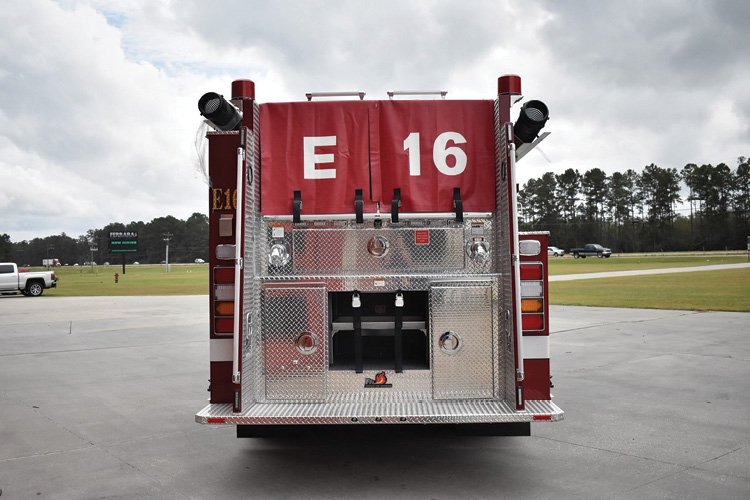 3 The hosebed on each of the San Francisco pumpers, which is covered by an electrically operated aluminum treadplate cover, carries two preconnects with 200 feet of 1¾-inch hose each and also 1,500 feet of three-inch hose.

Each pumper is powered by a Cummins 450-hp ISL9 engine and an Allison 3000 EVS automatic transmission with S5 performance programming and has four wheel brake locks. Doran says the Allison transmission has the special performance programming built in to deal with the issue of San Francisco’s hilly streets, and that the four wheel brake locks were installed to make sure the engines don’t move when stationary on hilly terrain.

Ladders are mounted on the exterior portion of the officer’s side of the rig above the lower compartments. Rivera says that San Francisco went through a period of having ladders mounted in an interior compartment under the hosebed, “but when the engine was facing downhill, because of the angle of the vehicle, the ladder becomes twice the weight to extract. By placing the ladders outside, a 22-foot extension ladder and a 12-foot straight ladder, two firefighters can easily handle them.”

Strength: 1,750 uniformed personnel and 86 civilian personnel for a total combined staffing of 1,836 personnel; 54 stations, including three stations at the San Francisco International Airport.

The pumpers are built on Ferrara’s Igniter chassis with a 96-inch-wide flat-roof cab that can seat six firefighters. The vehicles have extruded aluminum bodies, wheelbases of 169 inches, overall lengths of 28 feet 2 inches, overall heights of 9 feet 4¾ inches, and turning radii of 25 feet, according to Michael Doran of Ferrara Fire Apparatus.

Each rig has a Waterous CMU 1,500-gallon-per-minute pump (gpm) and a 500-gallon water tank. The hosebed, which is covered by an electrically operated aluminum tread plate cover, carries two preconnects each with 200 feet of 1¾-inch hose as well as 1,500 feet of three-inch hose. A hose reel with 150 feet of one-inch booster line sits above the pump panel.

Doran points out that the department wanted to reduce the overall profile on the pumpers as well as make the vehicles more compact on their wheelbases. “There’s no extended front bumper, but instead there’s a 110,000-pound-per-square inch painted steel frame rail bumper that has all its equipment recessed,” he says. “There are two air horns, a Code 3 speaker, and a Screaming Eagle flush-mounted mechanical siren in the bumper.”

Rivera says Ferrara incorporated other features that reduce the profile on the pumpers. “All of the emergency and scene lighting is recessed,” he points out, “and we have recessed-lighted grab bars, as well as an FRC InView 360-degree camera to help the driver maneuver through tight streets and to be aware of other vehicles and pedestrians around the rig.”

As an added safety measure, Rivera says that San Francisco had Ferrara install midship turn signals on each side of the rear of the cab body low on the rig and just ahead of the pump panel. He notes that bicyclists could be creeping alongside a pumper that’s going to make a turn but be unaware of the turn because they were not in view of either the front or rear turn signals.

Doran notes that the cab interiors have Sigtronics six-position intercoms and emergency medical services cabinets between two rear-facing Bostrom Sierra drop seam seats. “The two rear facing seats in the crew cab have low backs to allow for an unobstructed view out the center window of the cab,” he says. “On the back wall of the cab are two Bostrom high-back adjustable Fold and Hold seats. All seats in the cabs are nonself-contained breathing apparatus (SCBA) seats, Doran adds. “There are no SCBA in the cab,” he says. “One is carried in the engineer’s compartment, and the others are in the L2 compartment over the rear wheel.” 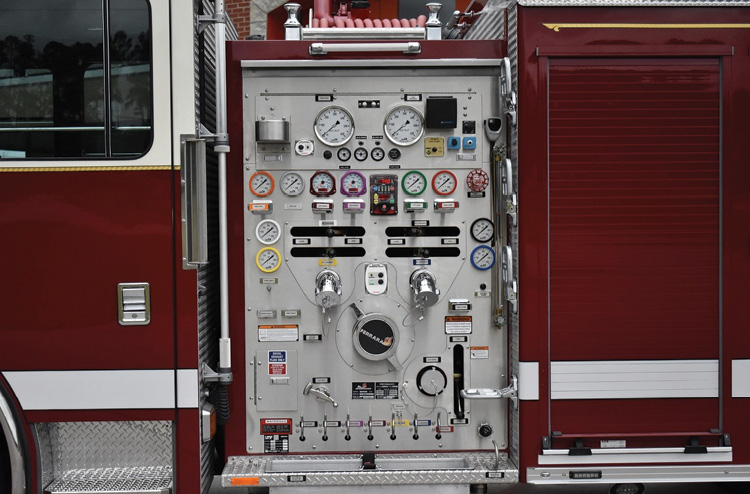 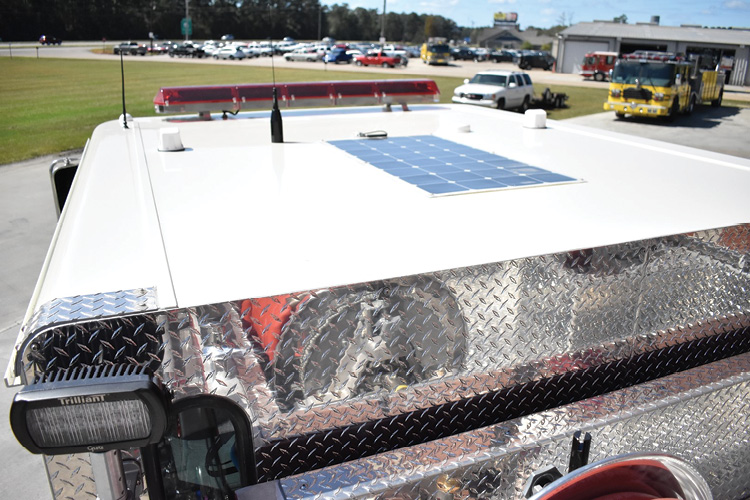 5 The pumpers have solar photovoltaic panels on the cabs’ roofs. 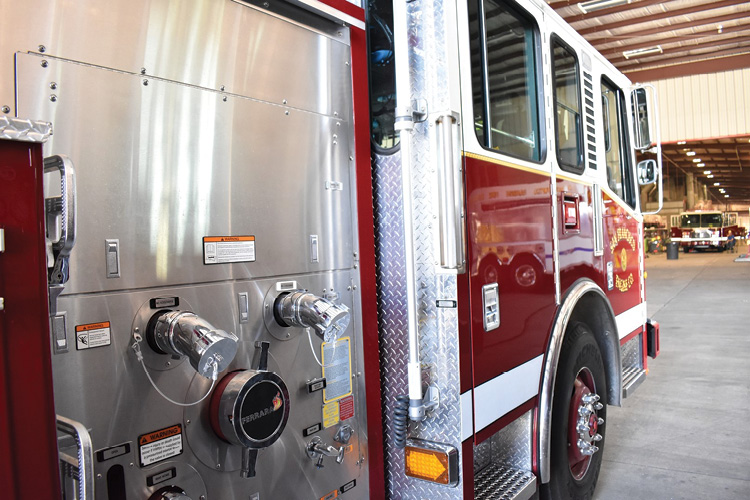 6 San Francisco added turn signals low on the back of each side of the rigs’ cabs to alert traffic, bicyclists, and pedestrians of a turn when they might not see the vehicles’ front or rear turn indicators. 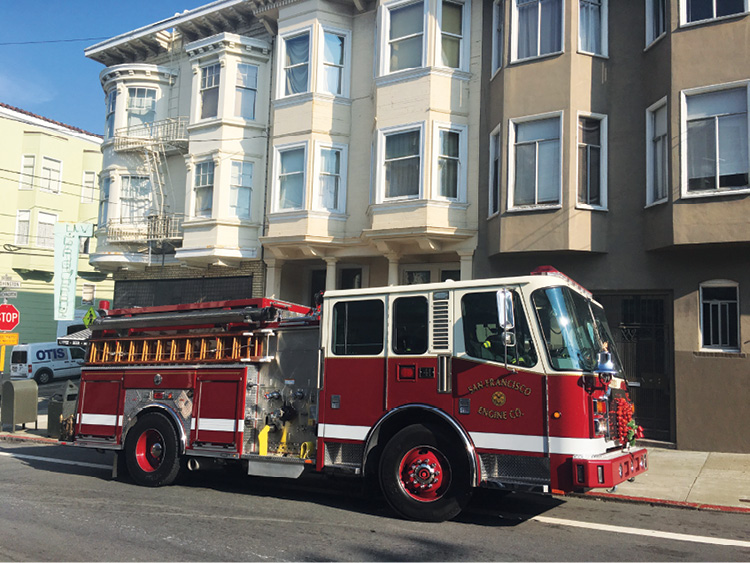 7 Each pumper is powered by a Cummins 450-hp ISL9 diesel engine and an Allison 3000 EVS transmission with S5 performance programming. [Photo 7 courtesy of the San Francisco (CA) Fire Department.]

Rivera says the new pumpers carry solar panels on the roofs of their cabs. “We have solar panels on all our fire apparatus now,” he notes. “At an incident, we might be there five minutes or five hours, but our instances of stranded engines or breakdowns due to batteries has gone down significantly since we started using solar panels.” In addition, Rivera says, “The solar panels can charge the rigs’ onboard batteries even from fluorescent lighting in the apparatus bays, so they have lowered our maintenance and ready-use costs, and we now are getting full use of the battery life because they are constantly being trickle charged.”

Lighting on the engines is recessed and includes Whelen LED emergency warning lights and Whelen Pioneer LED scene lights. The pumpers also have OnScene Solutions LED compartment lights and a Code 3 Traffic Advisor at the rear.

San Francisco also added fuel fill points on each side of the pumpers, Rivera says. “A lot of our firehouses are 100 years old, so the dual fuel fill points give us the ability to fill up with fuel and get into the station with a minimum impact to traffic and pedestrians,” he adds.

The many features that Ferrara incorporated into the engines made them much more compact and maneuverable, Rivera says. “Working with Ferrara, we were able to incorporate a lot of small elements into the pumpers that made an overall impact on the size of the vehicles, which makes the engines that much more efficient,” Rivera notes. “The engines have been very well received by our firefighters.”

What Is A TERCUSA And How Do I Use It?