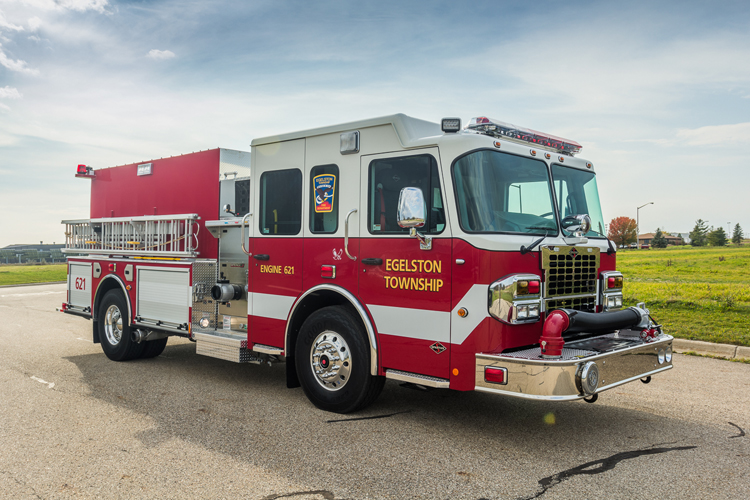 The Egelston Township (MI) Fire Department needed to replace a 1979 tanker (tender) and a 1982 engine with a single vehicle and had a number of specific requirements that it wanted built into the new pumper-tanker. Specifically, it wanted a short wheelbase, an integrated polypropylene body and tank on a custom Spartan chassis, and at least a 2,000-gallon water tank on a single rear axle.

Mark Cleveland, Egelston Township’s chief, says the department was replacing a 1979 commercial chassis tanker with a 250-gallon-per-minute (gpm) pump as well as a 1982 KME/GMC chassis engine with a 1,000-gpm pump and a 1,000-gallon water tank. “We considered several manufacturers that build polypropylene body and water tank vehicles, but one of them would not build it on a custom chassis, so they were out,” Cleveland says. “Spencer Manufacturing had built an all-polyrpopylene body and water tank pumper-tanker for the South Haven (MI) Fire Department, so we looked at their vehicle, and then put together the specs of what we wanted. We put the specs out to bid, got two bids returned, and awarded the contract to Spencer.” 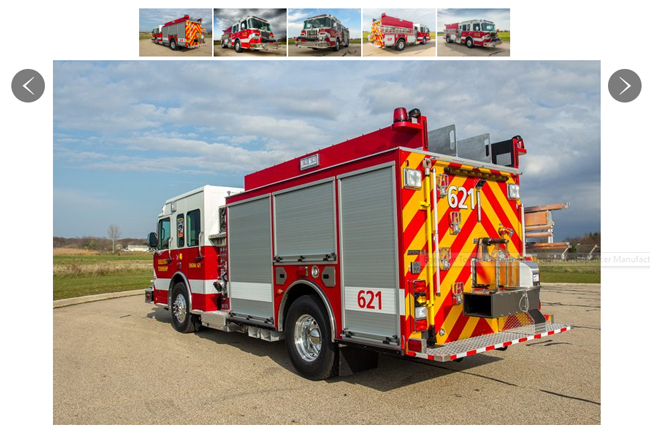 Steve Buckner, direct sales representative for Spencer Manufacturing, says that Egelston Township “approached us after seeing a Spencer pumper-tanker at a neighboring fire department. They had spent a lot of time designing exactly what they wanted, wrote their own specs, went out to bid, and accepted us. The department really had its act together in knowing what they wanted.”

The resulting pumper-tanker is on a Spartan MFD custom chassis and a Solid-Poly™ composite body powered by a Cummins ISL9 engine, and Allison 3000 EVS automatic transmission and with a side-mount Waterous 1,250-gpm pump and 2,200-gallon water tank. The vehicle has a wheelbase of 185 inches, an overall length of 31 feet, an overall height of 9 feet 7 inches, a front axle rated at 18,000 pounds, and a rear axle rated at 33,000 pounds. Price on the rig was $400,000.

“We tailored the pump house layout to be exactly what they wanted in order to match existing pumpers that the department has,” Buckner observes. “Also, the department wanted the ladders mounted in the traditional style on the right side of the vehicle above the lower compartments, but Egelston Township has the extension ladder on the outside and the roof ladder on the inside, instead of the other way around. We put our own spring-loaded ladder rack with polypropylene handles on the pumper-tanker.”

All compartments are covered by ROM roll-up doors, and there is wheel well SCBA bottle storage on each side over the rear wheels. The rig has a Newton 10-inch square electric swivel dump valve and extension at the rear, Whelen and Code 3 LED warning lights, and Whelen LED scene lights.

Egelston Township is 36 square miles in size, but the fire department is responsible for also covering 10 square miles of neighboring Bridgetown Township, Cleveland notes, as well as the Muskegon County wastewater facility, two foundries, one chemical manufacturing plant, and assorted retail locations. The department has six full-time paid firefighters and 14 paid-on-call firefighters who operate out of one station providing fire, rescue, and EMS response to a just-under 10,000 population.

Cleveland says that he knew the pumper-tanker would turn out to be a good truck, “but it turned out better than I ever thought it would. It has performed beyond our expectations, and we now are using it as our first-due engine. We would not buy a metal body pumper any more.”