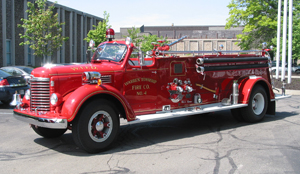 When fire service visitors travel to FDIC in downtown Indianapolis this April they may see a beautifully restored 1947 International KB-8 Oren Fire Apparatus 500-gpm pumper parked nearby. This open cab beauty is owned by the Eastside Fire Museum, located at 5350 E. University Avenue, Indianapolis. This is also the home of Indianapolis Fire Department Station 42. The site was previously Warren Township (IN) Fire Department 442, and is located in southeast Indianapolis. Museum personnel plan to sell a special T-shirt promoting the museum to raise funds for the ongoing operation of their organization.

At first glance it might seem that the pumper is a unit that served the department way back when; that is not the case. A group of Warren Township firefighters headed by Gary Powel and Michael Fontaine wanted to find a piece of fire apparatus that was typical of units that were in service in earlier days. The fire engine would be used to educate children and also maintain the spirit and tradition of the fire service as it was in earlier times. The hunt began in early 1999. The amazing thing was that a pumper that met their expectations was located just two miles away. It was acquired at a cost of $5,000 in December 1999.

Restoration Underway
That is when the work really got started. It turned out that the pumper had actually served the Muir (PA) Fire Department and had been in service until 1994. The rig was in fair condition, but was missing a few pieces of loose equipment. A visit to the Muir (PA) Fire Department brought about an exchange of items that helped out both departments. Gary Powell estimates that the rig then underwent a 75 percent frame-off restoration that started in 2000. 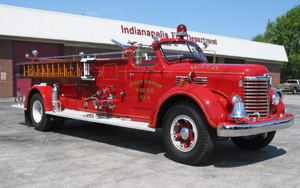 Gary, Mike, and a small group of helpers provided approximately 2,300-man hours to restore the rig to 100 percent operating condition. Included is a new 500-gallon water tank to replace the old tank that had rotted through. The crowning touch of the restoration was a fresh new candy apple red paint job. The restoration was made possible with contributions from several area businesses and individuals, as well as funds from the Warren Township (IN) Volunteer Fire Department and the Warren Township (IN) Fire Department. The finished product was displayed in April 2003 at the annual department awards banquet.

Current Use
Since 2003, the pumper has been used in many area parades and in educational exhibits. It is a wonderful testimony to the fire apparatus of the post World War II era. A visit to the fire station on the right day of a three-day rotation might find Mike “Hootie” Fontaine on duty. He is proud to show you rig that he and others worked so hard to restore.

Last year as the FDIC exhibit hall was about to open, I had the good fortune to arrive at Station 42 on a day that Hootie was on duty. He was a great host, providing a full tour of the pumper, then setting it outside to get just the right sun angles for pictures. The best came when we climbed on board for a quick run that took us down to the old International Harvester castings plant for one more photo opportunity. Sometimes life is good when you write for a fire apparatus magazine. Come to think of it, life is good! 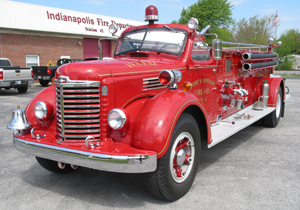 You Can Help
The East Side Fire Museum is a nonprofit organization and does rely on contributions from the public. Donations from those in the fire service are always welcome. Funds support the mission of educating children and seniors and preserving the history of the Warren Township (IN) Fire Department. They can be sent to Eastside Fire Museum, 5350 E. University Avenue, Indianapolis, IN 46219. Additional information on educational programs or exhibits may also be obtained by contacting garr225@comcast.net.