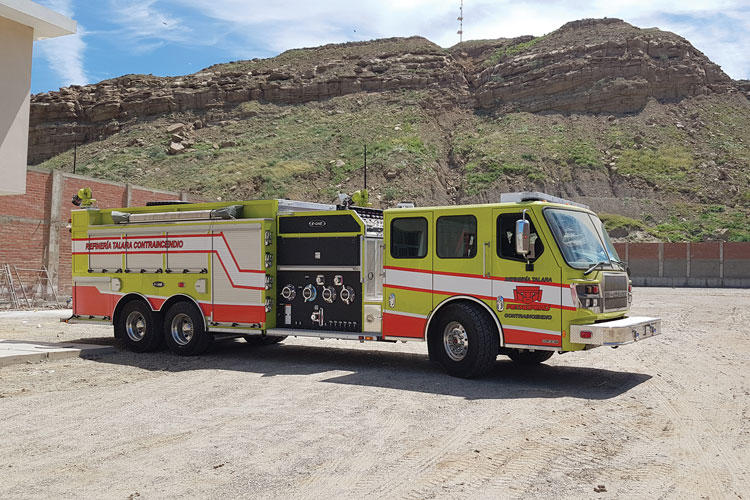 The Talara Refinery, according to Manuel Octavio Torres Merino, refinery supervisor, is undergoing a massive expansion that will increase its production output from 66,000 barrels a day to 95,000 barrels a day. The expansion also will add nine new refinery production plants, including a sulfuric acid plant, to its existing infrastructure. The refinery produces fuel derivatives of crude oil and has more than 100 large storage tanks at the Talara facility.

“They needed the increased horsepower so they can manage the slopes to their upper warehouses with better traction on the wheels and mud patterns on the tires because the refinery is still unpaved until its completion in 2019,” Ruizcaro says. “Also the area gets affected by the El Nino current, so they have big rains and floods that form mud in the area, so stability control was required on the vehicles too.”

Ruizcaro says the two new industrial pumpers for Petroperú are on E-ONE’s new generation Quest II custom chassis that has an improved visibility windshield and a 100-inch-wide extruded aluminum cab with an independent front suspension and a FIREMAAX® air ride rear suspension. The pumpers are each powered by a Cummins ISM 500-hp diesel engine and an Allison 4000 EVS automatic transmission. They each have a 266-inch wheelbase, an overall length of 40 feet 7 inches, and an overall height of 11 feet 5 inches.

The E-ONE custom industrial tanker built for Petroperú is on a Quest II custom chassis with a 100-inch-wide extruded aluminum cab and 20-inch Vista raised roof, with an extruded aluminum body and half side compartments, an independent front suspension, and a FIREMAAX® air ride rear suspension. It is powered by a Cummins ISM 500-hp engine and an Allison 4000 EVS automatic transmission. It has a 4,000-gallon foam tank for Class B concentrate and a 300-gpm power takeoff Edwards foam transfer pump.

Lighting on the custom tanker consists of four 12-volt Whelen dual-panel Pioneer Plus™ PFP2 LED flood lights and LED running lights. It also features a V-MUX multiplex system with a Vista display. The tanker has a wheelbase of 202 inches, an overall length of 36 feet 5 inches, and an overall height of 10 feet 8 inches.

Allen points out that some of the challenges in dealing with an order for an international customer aren’t necessarily in the building of the vehicles but in the logistics of getting the vehicles to the customer. “Petroperú made some tweaks in the location of equipment on the new pumpers compared with their earlier two vehicles,” he says, “but the real challenge is all the issues that go into exporting the vehicles, customs clearance, and local delivery in the receiving country. International vehicles generally are shipped by roll-on roll-off ships where they drive the vehicles onboard and then drive them off at the port of delivery.”

Merino says the company is pleased with the performance of the vehicles. “Even though they still have not come into combat,” Merino points out, “the tests in the practices and simulations are evidence of their fine performance. The vehicles are very versatile and efficient.”

Service area: Provides fire protection for a crude oil refinery that can refine 95,000 barrels per day.