Pacific (MO) Fire Protection District (FPD) had run a brush truck on emergency medical services (EMS) calls for years, especially in its rural protection area. It then replaced the rig with two smaller utility-type vehicles to cover its whole district, but they proved unsatisfactory, especially in the district’s urban area. 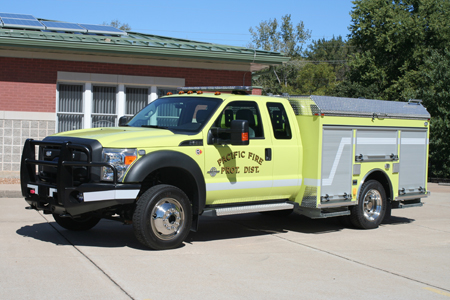 Pacific FPD then began running a Type 1 rescue-pumper for EMS calls out of its urban Station 1 but found it was using a lot of fuel and putting an enormous amount of wear and tear on the vehicle. Chief Rick Friedman realized this was a problem that called for a district-wide solution and asked his son, Battalion Chief Scott Friedman, to be the point person on finding an answer to the department’s dilemma.

The district had applied for a federal grant to fund a new rescue vehicle several years in a row, unsuccessfully, so when it finally received an award in 2011, it was a surprise, Scott Friedman says. “A friend and fellow firefighter, Dennis Maag, came across E.J. Metals and got talking with owner Kevin Quinn about the foam nozzle they developed, which was very effective,” he notes. “We visited them, checked out their vehicles and really liked their foam system.” 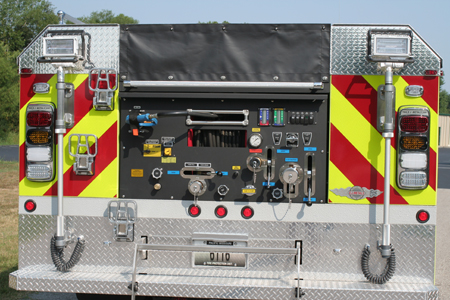 In the end, Pacific FPD wrote specs for a rescue quick-attack vehicle that went to bid, which was ultimately won by E.J. Metals.

“The department came up with the specs, and we designed the truck and built it as they wanted it,” says Quinn. “The vehicle included the Triplex nozzle we developed for the Israeli Fire Brigade where it’s easy to change from wet to dry foam at the nozzle.”

The rescue vehicle built for Pacific FPD was on a 2012 Ford F-450 chassis and cab with a CAT 12-gallon-per-minute (gpm) ultra high-pressure (UHP) pump and a Darley 1.5 AGH 100-gpm volume pump, both hydraulically driven. The rig carries a Pro Poly 200-gallon water tank, a 10-gallon foam cell, a Scotty around-the-pump/UPH Class A foam system and the Triplex foam gun. The vehicle is powered by a 6.7-liter gasoline Power Stroke engine.

“We call it Squad 6116 and it runs out of our Station 1 on all brush fires, EMS calls, and in winter, first out on auto accidents because of its four wheel drive,” says Friedman. “The vehicle carries a Holmatro combi tool and covers a lot of back-road areas in our district.”
Pacific FPD was so pleased with Squad 6116 that it ordered a second unit from E.J. Metals, but a beefed-up version. “Squad 6126 is on a Ford F-550 cab and chassis and runs out of Station 2,” says Friedman. “It’s second out on brush fires and first on rescues and vehicle fires because it has a full complement of Holmatro rescue tools—spreader, cutter, and rams—as well as Paratech air bags and firefighting tools. The heavier chassis also allows us to carry additional EMS equipment and a Stokes basket, which is valuable in a rural setting.” 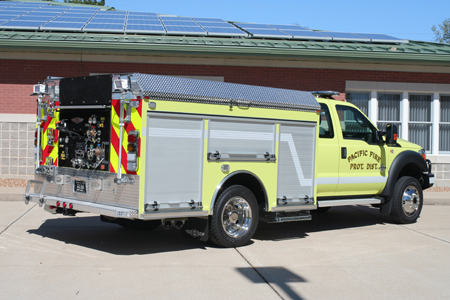 Friedman points out the Pacific firefighters are very satisfied with the performance of the UHP vehicles. “We haven’t had an issue where we’ve needed more than 200 gallons of water,” he says. “When we first got the first vehicle, we did burn training to see what the UHP foam would do. We burned two vehicles three times each for a total of six burns, each time with different fire loads. It proved to be a very effective unit, using about 50 gallons of water and about one gallon of foam for all six evolutions.”