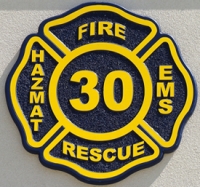 Belvedere Fire Company prepares for the next 9/11

Newport, DE – Claymont Fire Company’s Deputy Chief Eric Haley was on hand to see the GUARDIAN collapsed building simulator in action at the Belvedere Fire Station in Newport, Delaware, on the weekend of November 19-20.

The intense training sessions gave this select group of first responders an opportunity to experience what it would be like to perform a rescue operation in harsh conditions. Haley was planning to just observe, but as more and more firefighters kept talking about how true-to-life the experience was, he decided he needed to try it himself.

The day’s scenario involved the rescue of three victims from dark recesses of a collapsed building – two of whom were first responders who became trapped themselves when a floor gave way. Rescuing the victims required a full list of skills including breaking through a reinforced concrete wall and removing large quantities of debris.

Due to the confined space the debris extraction had to be done one piece at a time. The stream of rebar, broken furniture, ceiling tile, steel and wood was passed hand-to-hand out of the collapsed building simulator, alternated with a supply line of air packs, water, tools and supplies headed into the rescuers. Inside, the space was so confining that some of the first responders were forced to remove their bulky air packs to maneuver through the rubble. Mr. Quinn states that over 25,000 firefighters have gone through training on the simulator since it made its first appearance in 2006. “The one comment I hear over and over,” he said, “is about how realistic it is.”

“It’s no joke,” he continued. “There have been firefighters who discovered they were claustrophobic when they entered the GUARDIAN for the first time. Even trained search and rescue dogs have been known to freeze up inside.” 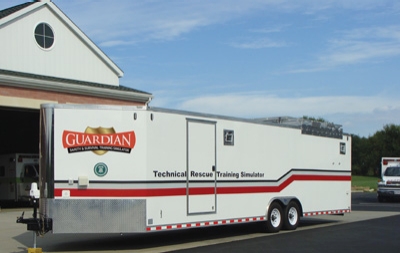 The GUARDIAN was designed by Thomas A. Quinn, whose unwavering commitment to meeting the needs of first-responders is the result of a lifetime in the industry, first as a firefighter, later as the founder of PPES. It was during his time spent supplying support to first responders at Ground Zero that he became aware of the glaring gap in disaster preparedness. “I felt that there was no safe, realistic way to simulate a building collapse, the same kind of scenario that first responders had to contend with after the 9/11 attacks have been recreated today,” Mr. Quinn revealed. “The Guardian does that – and more – whether it’s the result of an earthquake, a terrorist attack, fire or explosion.
Designed to meet the needs of FEMA Urban Search & Rescue operations, terrorist task forces,
Federal law enforcement, emergency medical service providers or local volunteer firefighters, the GUARDIAN can be configured and customized to reflect virtually every possible rescue scenario. Air pistons can simulate earthquake after-shocks and structural settling. Additional modules can allow for training in a window-rescue situation, cement wall breaching as well as a sewer line escape.
Even after the trapped firefighters were freed from their prison of detritus, the rescue was not yet completed, since extracting someone who may well have neck injuries requires careful handling. In all, it took over three hours before the last victim was carried out to safety, bringing the training session to a successful conclusion.
In late August the Montgomery County Fire Academy took delivery of this powerful new tool in disaster training for its Conshohocken, PA, campus.
PPES was founded in 1996 as a full-service company specializing in meeting the needs of first responders and the fire and rescue industry. In addition to the GUARDIAN Safety and Survival Training Simulator, PPES provides Rescue and EMS equipment, service, training and certification. The GUARDIAN is available for sale or rent.
When Claymont Fire Company’s Deputy Chief Eric Haley finally exited the GUARDIAN after crawling around inside and helping smash through a cement wall that blocked the only passage way out, he was exhausted and dripping of sweat. Mr. Quinn was impressed by his stamina. “If he takes away only one idea from training on the GUARDIAN, I hope it’s this: It’s important of have a plan before you start. It will save time and prevent problems later on. More importantly, it will save lives.”