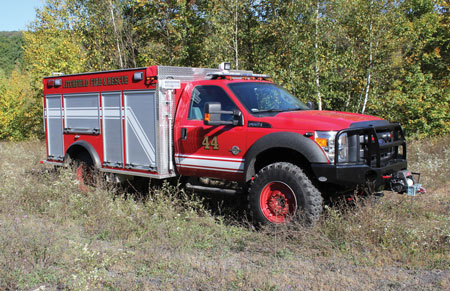 Doug Kelley, product manager for KME, says his company has seen a lot of changes in wildland vehicles in recent years. “First, we have a lot more requests for super single conversions for better off-road ability, along with putting on tires with a more aggressive tread pattern,” Kelley says. “With the larger tires, there’s usually a lift kit that raises the overall package but doesn’t make any significant change in the vehicle’s weight.”

Joe Messmer, president of Summit Fire Apparatus, concurs on the trend toward super singles. “A lot of fire departments are getting away from the dual rear tires and having us put super singles on their wildland and brush trucks,” Messmer points out. “When they take a truck off the road and into the fields with dual rear tires, very often they get bogged down with mud stuck in between the duals. The super singles cure that problem.”

Messmer adds that when wildland vehicles go off-road, the heavier they are, the quicker they sink into the soil. “Many departments are going with a Ford F-350 chassis for their Type 6 because it’s lighter than the F-550,” he says.

Doug Feldman, western regional manager for Rosenbauer, says the company has seen a trend of fire departments and agencies moving toward Type 6 apparatus. “It’s a much smaller configuration than a typical Type 3 engine,” Feldman notes, “but still allows the department to carry 300 or 400 gallons of water with the maneuverability and accessibility that you don’t have in a Type 3.” Feldman adds that “the cost of a Type 6 is lower than that of a Type 3, which may be another driving factor in the trend.”

Bob Sorensen, vice president of SVI Trucks, says his company has seen activity in both Type 6 and Type 3 engines, with the Type 3 models continuing to be popular, especially in the western United States. “We’ve built four Type 3 engines for the Dallas (TX) Fire Department,” Sorensen says. “These are the Model 34-style engines built on four-door International chassis with 500-gallon-per-minute (gpm) pumps and 500-gallon water tanks.”

Clarence Grady, application manager for fire suppression and foam systems at Pierce Manufacturing Inc., says Pierce continues to make wildland pumpers for the federal Bureau of Land Management (BLM). “It’s a Type 4, which is their Model 667 designation, with a Darley 2.5AGE 50-gpm pump and a 750-gallon water tank,” Grady says. “We also build Type 3 models for BLM, which is their model 665, with a 500-gpm pump and a 500-gallon water tank.” In addition, Pierce builds a lot of Type 6 units with a variety of pumps on them, Grady adds. “Typically, they are carrying a 300-gallon water tank and using a Darley 1.5AGE pump powered by either a Kubota diesel or a Briggs & Stratton engine.”

In the western states, Grady says some fire departments have Pierce put a 1,000-gpm single-stage pump off the four-wheel-drive transfer case on a vehicle as its main pump and add a Darley 100-gpm pump to use as a pump-and-roll pump. “In effect, the truck is a compact four-wheel-drive Type 1 engine but built on a body and chassis the size of a Type 3 with pump-and-roll capability,” he says.

Feldman says Rosenbauer’s Timberwolf model is popular in urban interface areas. “It has all the benefits of a Type 3 engine for wildland but gives added structural fire protection,” he says. “It carries a Rosenbauer NH 1,250-gpm rear-mount pump that gives compressed air foam system (CAFS)-like foam without the addition of an actual CAFS unit. The NH provides both high pressure and pump-and-roll capability.”

Mike Howe, president of Howe and Howe Technologies Inc., says his company has seen a trend toward larger wildland vehicles. “Fire departments are tired of being restricted by smaller trucks in terms of gross vehicle weight rating (GVWR) and capacity for carrying water,” Howe observes. “Our Bulldog is built on an International 4×4 chassis and uses 54-inch Hemet tires. It can carry up to 2,000 gallons of water, although the typical Bulldog water tank is 1,000 to 1,500 gallons.”

Howe notes he’s also seen a trend away from power take-off (PTO) pumps. “Fire departments want their wildland vehicle pumps independent of the chassis so they can do pump-and-roll,” he says. “Plus, they are easier to maintain and just as reliable as a PTO pump.”

Ken Lenz, vice president of engineering for HME Inc., says the newest model wildland truck HME makes is its HXR Rapid Attack Truck. “It’s an all-wheel-drive custom design with a shorter wheelbase than a Type 3 engine,” he says, “with a 1,500-gpm pump, a 500-gallon water tank, a 30-gallon foam cell, and an FRC foam system. The HXR gives the crew ruggedness for protection in case of a rollover through the cab design; plus, it has air bag capability.” He adds that the HXR’s modular mounting system isolates the water tank and tank frame from the chassis so they are less affected by stress and twist.

Kelley points out another trend KME has seen in wildland vehicles-a move from lower flows to higher pressure and ultra-high-pressure (UHP) pump systems. “The advantage to a UHP system is the lower water flow, which is attractive on a wildland truck with limited water,” Kelley says. “Also, the higher pressure allows the water to penetrate deeper into the fuel, especially if you are using a wetting agent like foam. It’s not a magic bullet because its effectiveness depends on fuel types, but it’s another tool in the toolbox.”

Grady agrees that there’s been a move toward more UHP system use on wildland vehicles lately. “We’re putting a fair number of UHP units on vehicles as secondary pumping systems on both Type 6 and Type 3 engines,” he notes. “They usually are hydraulic drives on Type 3 engines, while on Type 6 models they generally are diesel-driven pumps of the type made by Darley Co., E.J. Metals, and HMA that pump in the 1,200- to 1,500-pounds-per-square-inch (psi) range.”

He adds that Pierce has built Type 6 wildland vehicles for the U.S. Navy with secondary pumping systems and with triple pumps on the Navy’s Type 3 models. “The U.S. Navy Type 3 units get 500-gpm main pumps, pump-and-roll pumps, and hydraulically driven UHP pumps,” Grady points out.

Pierce is developing a mobile attack pump, a hydraulic drive pump for pump-and-roll to go on International, Freightliner, and custom chassis, Grady says, “available in two flows-100 gpm at 150 psi, which is most popular, and 250 gpm at 150 psi.” Pierce also is developing a hydraulically operated PTO-driven 250-gpm at 150-psi pump for the Ford F-550 chassis in wildland and mini pumper configurations, he notes.

Rich Suche, president of Fort Garry Fire Trucks, says his company regularly builds Type 3 and Type 6 wildland vehicles for fire agencies and recently has built two unusual vehicles. The first is the Wildland Dominator, a rubber-tracked and steel-cleat vehicle that has only five psi of ground pressure, a dozer blade in the front that can knock down six-inch-diameter trees, a Waterous ONE STEP™ 250-gpm pump and foam system, a 1,000-gallon water tank, and an Akron Brass Firefox roof turret.

The other unusual wildland vehicle Fort Garry built was for the Saskatchewan (CAN) Forestry Service on a Ford F-550 brush truck that has a foam generator on the back that can lay down an eight-foot-wide foam barrier around a fire using an 18-hp portable pump, a 300-gallon water tank, and a Scotty foam system.