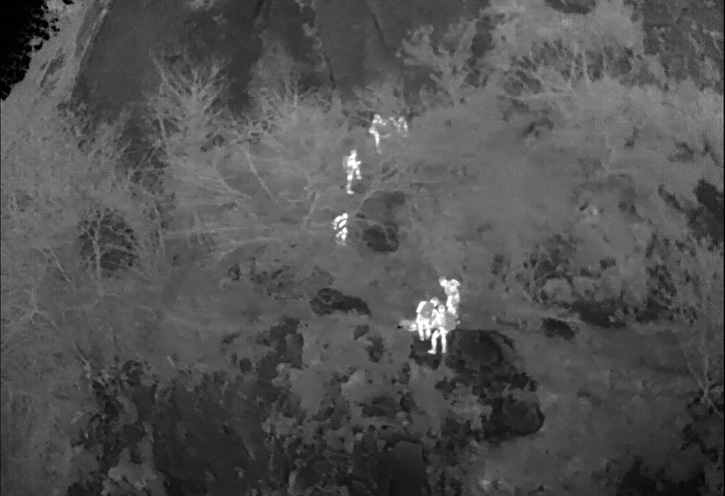 Infrared thermal imaging cameras (TICs) and digital video cameras are being used onboard unmanned aerial vehicles (UAVs) and wildland aircraft to scope out the complexity of wildland fires; identify troublesome areas; and, in another application, as an asset in search and rescue (SAR) situations.

Clint Fey, division chief of special operations for West Metro (CO) Fire Rescue, says his department covers 109 square miles of territory with no airspace restrictions. “We have two DJI Mavic 2 Enterprise UAVs, one with a zoom digital camera and the other with a thermal imaging camera, and four licensed Part 107 FAA pilots to fly them,” Fey says. “We’ve had quite a bit of success with them. On a couple of wildland fires, we flew them out and got a good size-up of the fire, identified safe access for the crews, and could see where the fire jumped the trail and escaped our containment so we could direct them to the spot to take care of it. Getting a good look and size-up on a wildland fire is only part of how we use the drones, because they’ve also become an after-action tool to determine where we were positioned and how we worked the fire.”

1 An injured hiker is rescued by West Metro Fire Rescue personnel after the hiker was located by a DJI Mavic 2 Enterprise drone. [Photos 1-2 courtesy of West Metro (CO) Fire Rescue.]

2 A West Metro pilot, licensed by the FAA, flies a drone off on a search and rescue mission.

Fey points out that West Metro’s pilots use a DJI Smart Controller to fly the drones and connect the controller with an HDMI cable to a 50-inch screen in the rear of a battalion chief’s vehicle so the incident commander can see the footage being recorded by the UAV. “In terms of SAR, we get a lot of calls for lost hikers or bikers, where we’ll send up a Mavic and try to get eyes on them and their cell phone to identify their GPS coordinates,” Fey observes. “With SAR, it’s more about scouting access and egress and scoping out the best way to get to the person, then guide the resources in and guide them back out. The Mavic saves a lot of time driving up trails and maybe finding your access blocked and having to backtrack.”

Jeff Kleven, battalion chief and UAS program manager for the Fremont (CA) Fire Department, says Freemont has six airframes comprising a DJI Mavic with a Duo visible and TIC, a DJI Matrice 200 XT2, a DJI Phantom, a DJI Mavic M210, and an Aereon Sky ranger with FLIR infrared and visible imagery cameras. “We’re using drones for pretty much everything,” Kleven points out. “We’re trying to integrate them into all of our operations, including our COVID-19 response. For a SAR situation, we’ll put up a Mavic first because we can get it up quickly while someone is setting up the Matrice, which takes more time. We’ll fly the Mavic at a relatively low altitude to spot things, and as soon as the Matrice is up, it’s our number-one go-to because it has a better dual camera with much larger sensors that give better isotherm ranges.”

3 The X380 Thermal Imager—Five Button made by 3M® Scott is often used by SAR teams because of its hot-spot tracker feature. (Photo courtesy of 3M Scott.)

Fremont has flown its drones over wildland fires, but Kleven says a big issue is having both manned and unmanned aircraft in the same airspace. “If there’s no manned aircraft operating, we’ll put up a UAV to determine what direction the fire is going in, where the hot spots are, where the hot flank is, and what’s ahead of the fire,” he says. “We can get that information in a matter of seconds with a drone and bring it back down before the manned aircraft flights arrive. With a drone we are able to fly and confirm fire lines are done instead of having to hike hours to get to them, and many times when manned aircraft are smoked out, we can get drones under the smoke to evaluate lines and see what the fire is doing.”

Chris Carnahan, dispatch supervisor for MetCom at South Metro (CO) Fire Rescue, says his agency has a full line of DJI UAVs. “Our everyday go-to drone is the Mavic Enterprise, and we carry three of those,” Carnahan says. “Each of them have a FLIR infrared camera, which we use as our initial attack drone because it can be launched in minutes. We also carry a couple of DJI Mavic Mini UAVs, which are small units that can live in a backpack and be flown in interiors because they have full blade protection. We also have a Matrice 210 that carries a FLIR thermal imaging camera and a zoom visible imagery camera.”

Carnahan says that South Metro received a call for SAR about an elderly woman with dementia who was missing from her home. “Law enforcement, SAR, and the dogs were out, and when we were called, we put up a Mavic with the FLIR infrared camera and ran a grid pattern from her house,” he says. “We found her at her neighbor’s house, where she had been for the past 12 hours.”

Kelly Sterna, wildland division chief for the Los Alamos (NM) Fire Department, says Los Alamos has five Part 107 FAA-licensed pilots, including himself, who operate three DJI Mavic 2 Enterprise Dual UAVs, and a DJI Matrice 210 drone. “All the platforms have a visible imagery and a FLIR infrared camera,” Sterna points out. “While we have not had the opportunity to scout a wildland fire yet, the drones would be able to give us initial intelligence that we could pass along to the helicopter station nearby.”

However, Los Alamos has used its UAV aircraft in SAR situations. “We got a call during our June to August heavy monsoon weather of a tourist hiker who had gone off trail and was lost,” Sterna says. “I deployed the Matrice 210 and posted a lookout to keep track of the drone’s location, then got a temporary waiver from the FAA to fly past line of sight and to night fly. We were able to get the drone over the hiker just as our hiker crews were arriving.” Sterna notes that the Matrice 210 can carry a payload of up to seven pounds beneath the camera gimbals. “In addition to the two cameras, it can carry water, a radio and illumination sticks to leave with a lost hiker,” he says.

4 The view from a SkyRanger R70’s TIC of rescuers carrying a search victim on a stretcher. (Photo courtesy of FLIR Systems.)

FLIR also offers the Scout II 640 and the Scion™ PTM166 thermal imaging monoculars that are used in SAR situations, Messerschmidt notes, where humans (also animals and objects) can be detected, day or night, in low visibility environments. The Scion model, he adds, is capable of geotagged video recording and live video transmission.

Romeo Durscher, senior director of public safety integration for DJI Technology Inc. CA, says DJI has fielded many Phantom and Inspire UAV units with fire departments across the country. “And now, many of them are getting into our Mavic and Matrice lines and integrating them into their operations,” Durscher says. “A lot of firefighters want a UAS that’s easy to carry in a backpack or a pocket, and that’s where our Mavic comes in, especially in SAR situations. And on our Matrice line, which is a slightly larger frame, we are able to put in the FLIR-DJI XT camera with both thermal imaging and visible imagery in one payload where they are side by side on the screen, or the thermal can be embedded in the screen’s center, surrounded by the visible light image.”

Mike Mocerino, robotics business development manager for W.S. Darley & Co., says Darley has partnered with DJI, FLIR, Yuneec, and InstantEye® on UAVs and their camera systems. “Use of drones in wildland fire situations is tricky because it’s difficult to use manned and unmanned aviation in the same space,” Mocerino points out. “However, a lot of DJI drones have transponders on them that can identify manned aircraft location and how far away they are.” Mocerino says that drones can be invaluable “in identifying the pattern of the fire, how and where it’s moving, and potential hot spots that flare back up. “I think fixed wing drones will be used more in the future on wildland fires,” he says. “Rotors are limited to flying visual line-of-sight applications, but once the FAA relaxes those restrictions, we’ll see more fixed-wing UAVs on wildland fire scenes.”

Darren Wolfe, thermal imaging global product manager for Avon Protection Systems, says that all of Avon’s Mi-TIC 3-button thermal imaging models have application modes that can be used in SAR situations. “There are ‘white-hot’ and ‘black-hot’ modes for general search and a ‘missing persons’ mode with a blue-hot grey scale,” Wolfe says. The blue-hot application is best for SAR, Wolfe maintains, with the hottest 10 percent of the image showing a blue thermal footprint. Wolfe notes that the dynamic range in “missing persons” mode is -40°F to +180°F. Featuring a 50 percent field-of-view lens, its parameters are identification in 24 meters, recognition in 90 meters, and detection in 230 meters.

Manfred Kihn, thermal imaging fire training specialist for Bullard, says Bullard makes the NXT, QXT, T3X, and T4X handheld TICs that are used by SAR crews. All the models have Bullard’s Super Red Hot colorization, Kihn says, “and Bullard’s exclusive Electronic Thermal Throttle® that enables the user to optimize scenes with the touch of a button, as well as 2x and 4x digital zoom.”