Some fire departments around the country are outfitting small engines (Type-6-size vehicles) and rescue trucks with compact compressed air foam system (CAFS) units to have a foam capability to make the vehicles more effective in certain types of fire incident responses.

The use of compact CAFS units even has extended to placing them on utility terrain vehicles (UTVs) and all-terrain vehicles (ATVs) to allow departments to have a CAFS application in wildland scenarios and other out-of-the-way places. 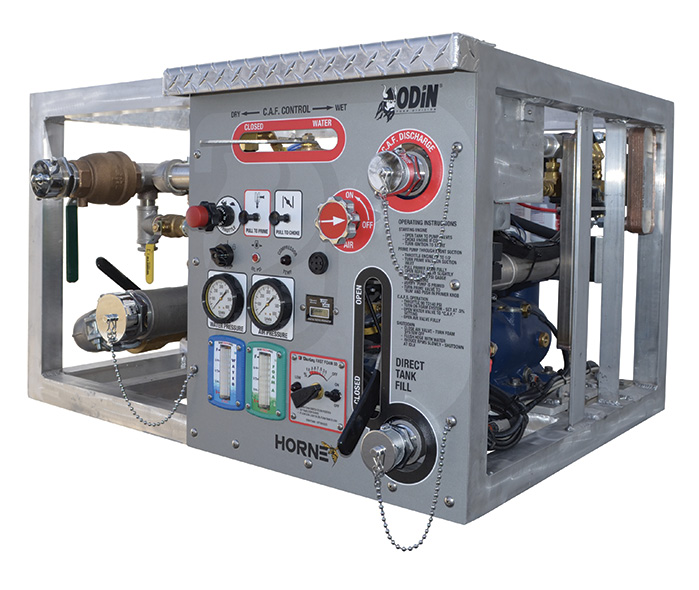 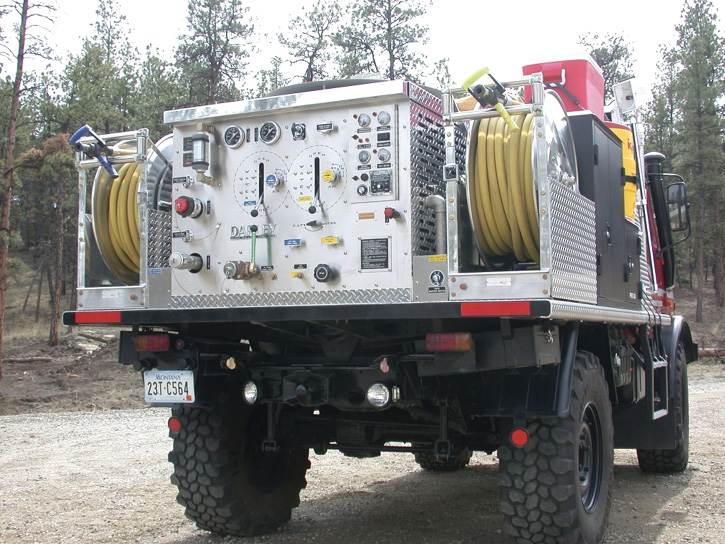 Troy Carothers, AutoCAFS manager for W.S. Darley & Company, says that for more than a decade Darley’s Odin® Foam has been designing and building power takeoff (PTO) driven compressor packages to allow fire trucks to produce a quality compressed air foam. The system is designed for mini pumpers, rescue-pumpers, retrofits, tactical tenders, wildland interface units, and other vehicles, he points out. “Odin Foam has designed the module to be much smaller to allow for the large storage space requirements of today’s fire industry, cutting the unit’s size by 20 percent,” Carothers says.

“Most Odin products are designed to be 48 inches wide to fit into the bed of a pickup truck like a Ford F-450 or F-550 along with a 200- or 300-gallon polypropylene water tank,” Carothers points out. “The one difference is the Cobra unit that uses the same components as the Weapon but is designed as a cross-mount to fit across the chassis at the cab’s back window, much like a side-mount pump.” Darley also makes the Wasp, a wildland attack and structural protection vehicle on a Ford F-550 chassis that packs a Darley AutoCAFS™ pumping system consisting of a Darley PSMC 1,500-gpm pump, gear-driven 120-cfm rotary-screw air compressor, and FoamPro 2001 foam proportioner.

Tim Rowe, owner of Rowe CAFS, says that one of his company’s most popular units is its Wildland CAFS that puts out 118 gpm and 24 cfm at 118 psi using a 25-hp Kohler gasoline-driven electronic fuel injected EFI engine, a HYPRO 9203C pump, a Champion R15 compressor, and a FoamPro 1601 foam proportioner. “These units are being installed on Ford F-350 through F-550 pickup trucks, usually with a 200- to 300-gallon water tank and a one-inch hose booster reel,” Rowe says. “Some departments will run plumbing to a manifold behind the cab where a firefighter can deploy a six-foot whip line.”

Rowe says that increasing the Wildland CAFS unit’s driving power to a 40-hp carbureted engine gives the system the ability to supply a 1½-inch handline. “The next step up in smaller CAFS units is the diesel-powered WUI DM44, which we also see a lot on rescue trucks, so it can use fuel from the rescue’s main diesel tank,” he notes. “We also see the DM44 being used on large wildland trucks, like on International 7200 and 7300 chassis.” The unit will produce 175 gpm from a Rowe RPM2 pump and 60 cfm from a Vanair rotary-screw compressor at 135 psi.

Rowe CAFS units also are being installed on Kubota and Polaris UTVs, Rowe adds. “These usually carry 60 gallons of water with a small pump and sometimes our RPM2 and a stored-energy bottle that will flow CAFS at 25 gpm through a one-inch booster hose,” he says.

Todd Nix, sales consultant for Unruh Fire Inc., says Unruh built a CAFS unit into a Ford F-550 chassis with a rescue body for the Miami (OK) Fire Department. “We put together a dry CAFS for them with a 30-gallon tank for mixing the water and foam and self-contained breathing apparatus (SCBA) bottles to pressurize the system,” Nix says. “The department wanted fire suppression capability on its small rescue but didn’t want the CAFS to take up too much of a footprint.”

Nix also serves as a lieutenant for Sedgwick County (KS) Fire District 1 and says his department has used an Odin Derringer CAFS unit on a Ford F-550 since 2007. “That unit is now in reserve because we are running three Pierce pumpers with Hercules CAFS units on them and two Smeal pumper-tankers that have FoamPro CAFS,” he notes.

David Fieber, chief engineer for pumping products at Pierce Manufacturing, says that Pierce makes the Hercules® 140 and 200 CAFS units that use air compressors putting out 120 to 220 cfm and everything in between. “It depends on what the customer wants in terms of discharges,” Fieber says. “Our Hercules 140 is a hydraulic drive that will put out 140 gpm at 125 psi and handle three 1¾-inch handlines, while the Hercules 200 is PTO-driven and will deliver 200 gpm at 125 psi to four 1¾-inch handlines. We usually are able to package the systems into tight spaces and try to locate them in space that’s not used every day, like the dunnage area.”

Gregg Geske, director of North American sales for Waterous, says his company makes a number of slide-in, portable CAFS units that are used on smaller fire vehicles and rescues. The Waterous 70-35-GP is a slide-in portable unit that has a simultaneous flow of 70 gpm and 35 cfm at 100 psi, while the Waterous 100-50-DS is a portable modular CAFS unit developing 80 gpm and 40 cfm at 125 psi, and the 200-100-GS is a slide-in modular unit capable of 160 gpm and 80 cfm at 100 psi, Geske says. “We see the 70-35-GP being used on brush trucks and UTVs,” he notes, “while rescues usually take the 100-50-DS diesel skid unit or larger.”

Amey Kelkar, product manager for pumpers and tankers at E-ONE, says E-ONE recently put a CAFS unit on a Ford F-550 for the El Rito (NM) Fire Department. “The pumper has a Hale DSD 750-gpm pump, a 275-gallon water tank, and a Waterous 140-P CAFS,” Kelkar says. “The fire department covers a small town of a couple thousand population at 7,000 feet elevation and is surrounded by the Carson National Forest,” he notes. “CAFS helps them with low daytime staffing, improves fire knockdown time and exposure protection, and extends their fire suppression capabilities.”

Dave Mahrt Sr., president of Kingsway Industries Inc., says his company has been making TRI-MAX CAFS units for 21 years and has sold more than 7,000 units to the U.S. Army for use on aviation flight lines, mostly TRI-MAX 3 30-gallon Mini-CAF units, along with a number of 60-gallon skid units. “We have several hundred TRI-MAX CAFS on rescues, heavy rescues, and other fire department vehicles across the United States,” Mahrt says. “And, we have over 10 of our TRI-MAX 70 units mounted into Pierce Manufacturing tractor-drawn aerials (TDAs) and one system on an E-ONE aerial. Some of them are installed in the tractor of the TDA and others on the frame of the trailer.”

TRI-MAX CAFS units run from a three-gallon series through 10-, 20-, and 30-gallon units to the Super-CAFS series of 60- and 70-gallon systems. “We have just developed a TRI-MAX CAF S60 that is the first CAFS to be flown by helicopter,” Mahrt points out. “With a vertically mounted monitor, the flow can be used to foam a safety zone around trapped wildland firefighters, or the helicopter can be landed at a safety zone to protect wildland crews if they have to pull back and go under their fire shelters.” 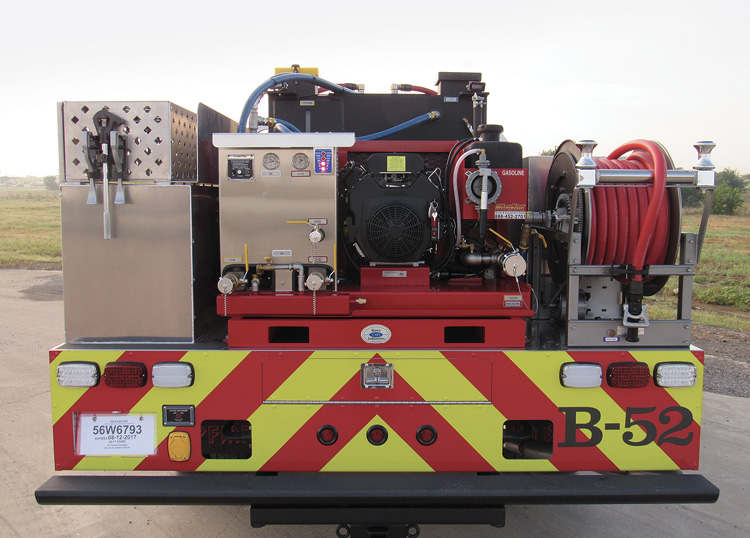 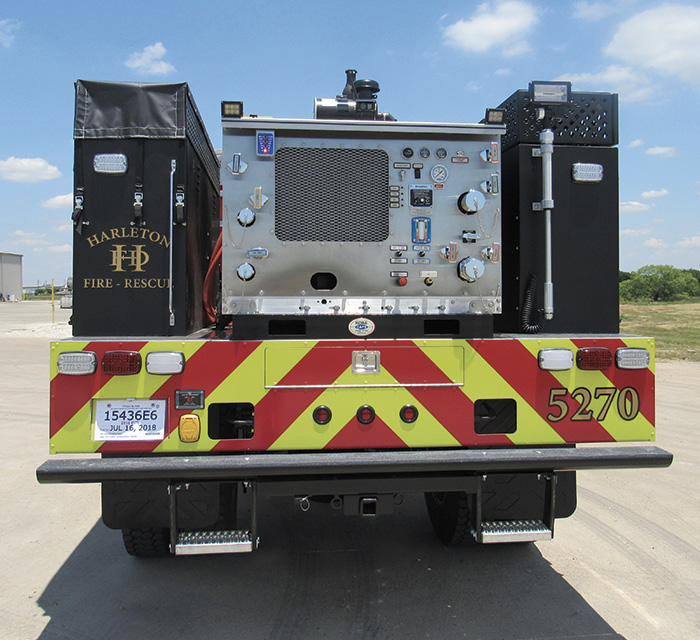 4 The Harleton (TX) Volunteer Fire Department had Rowe CAFS build this CAFS pumper with a DM44 unit that produces 175 gpm and 60 cfm at 135 psi.

5 Unruh Fire put a dry CAFS unit with a 30-gallon tank for mixing water and foam that’s propelled by SCBA cylinders on this Ford F-550 for the Miami (OK) Fire Department. (Photos 5 and 6 courtesy of Unruh Fire.) 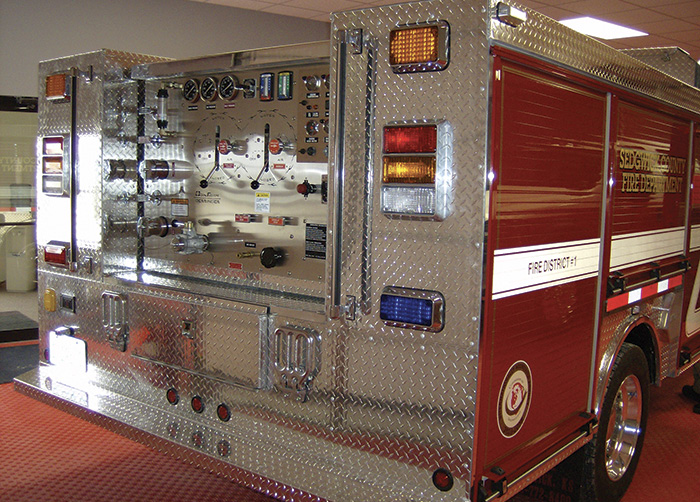 6 Sedgwick County (KS) Fire District 1 had Unruh Fire build this rescue squad with an Odin Derringer CAFS unit on it. 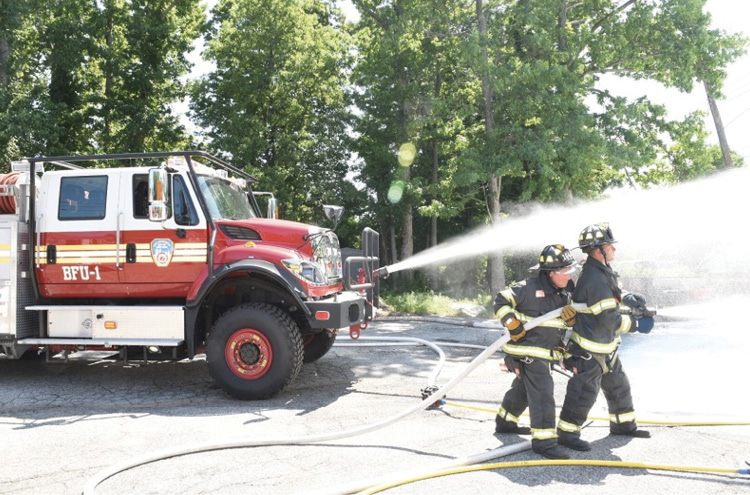 7 The Fire Department of New York uses the Waterous 500-150-P CAFS units on its brush trucks, PTO-driven units that deliver 500 gpm and 150 cfm to two 1¾-inch hoselines, a booster reel, and a bumper turret. (Photo courtesy of Waterous.) 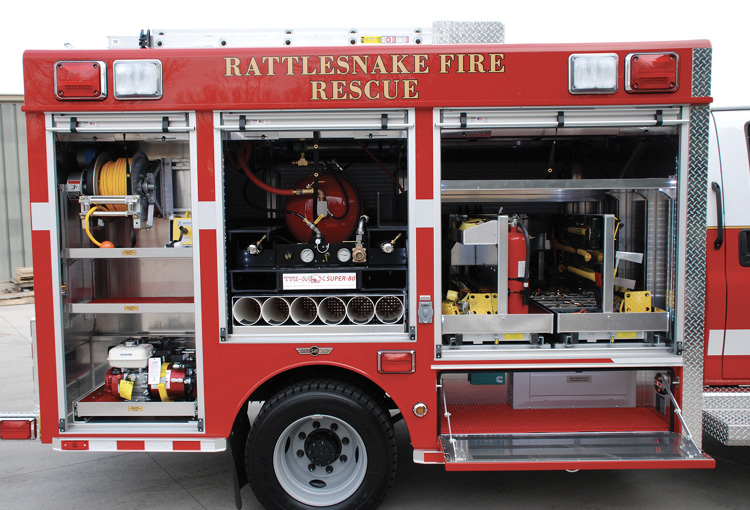 9 The Rattlesnake (CO) Fire District had a TRI-MAX Super-80 CAFS unit installed on its rescue. (Photos 9 and 10 courtesy of Kingsway Industries Inc.) 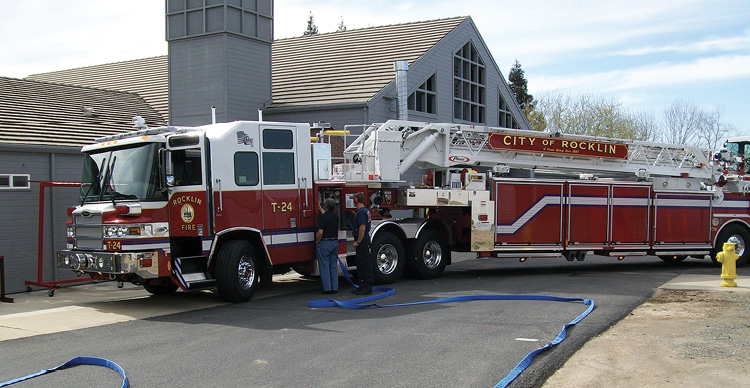 10 The Rocklin (CA) Fire Department has a TRI-MAX 70 CAF system mounted on its Pierce TDA.

Dennis Smagac, president of Intelagard Inc., says his company has been building multipurpose CAFS units for more than 20 years, ranging in size from small two-gallon wheeled backpack units to a 500-gallon skid unit. Intelagard makes the Macaw Backpack, a five-gallon CAFS backpack system that runs off both low- and high-pressure SCBA cylinders. “The Macaw multiplies its five gallons of carried water into as much as 175 gallons of finished foam,” Smagac says. “It can shoot a stream up to 30 feet with a run time of about two minutes.”

Intelagard also makes the Viper Recovery, which can be worn as a backpack, wheeled like a carry-on suitcase, or mounted on a small vehicle. Viper uses dual collapsible and refillable bladders in one-gallon, 1½-gallon, and two-gallon sizes. “Viper is very useful on parking garage fires where it may be difficult to get in an engine,” Smagac points out.

Intelagard’s SwiftCAF ATV is designed to be carried on an ATV and has a 14-gallon tank, while the SwiftRunner SRII CAFS unit is designed for use on UTVs, pickup trucks, or trailers and is powered by a 14-hp gasoline or diesel engine. The Intercept is Intelagard’s CAFS vehicle-transportable skid system that can be configured with tanks ranging from 100 to 500 gallons, having expansion ratios of up to 20:1 and a projection distance of more than 100 feet.