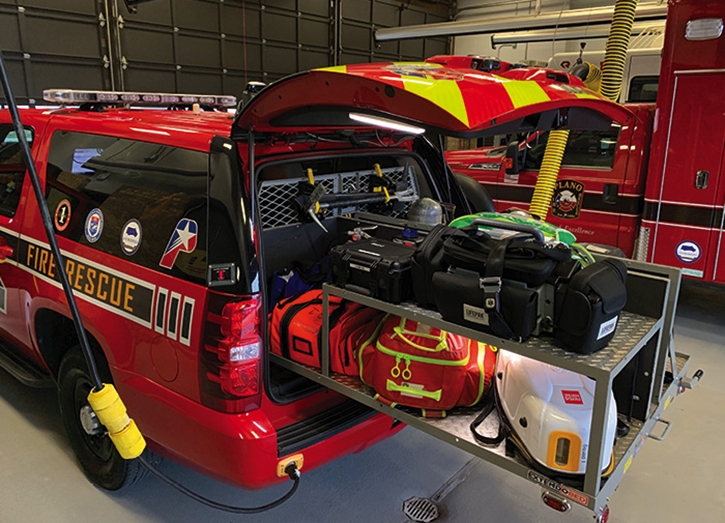 They include Memphis (TN) Fire Services, the Tucson (AZ) Fire Department, Portland (OR) Fire and Rescue, the Mesa (AZ) Fire and Medical Department, and Plano (TX) Fire-Rescue, among others. The departments share how their programs are working and the kinds of apparatus they are using to run these lower-acuity EMS calls.

Memphis Fire Services started its ARV program several years ago, running eight Ford F-350 pickup trucks with crew cabs and long-bed wheelbases to EMS calls instead of Type 1 engines or a truck company. As the program has matured, the ARV fleet has increased to 12 units. “The program has been very successful for the department,” says Kirk Lock, Memphis Fire’s deputy chief of operations. “Our 12 units are cross staffed by engine and truck personnel, with nine engine crews/ARV staffing and three truck crews/ARV staffing.”

Memphis has retained the original design of its ARVs, Lock says, with the F-350 bed enclosed with a cap that rises to the top of the truck cab and covers the entire bed. Access to the area under the cap is from the rear, and there are compartments on each side of the rig. There’s a slide-out tray in the rear of each ARV that gives easy access to the unit’s medical gear. Lock points out that the Memphis ARV program “means much less wear and tear on the apparatus and equipment and also on personnel as well as noise reduction on a scene. The ARVs get 15 miles to the gallon (mpg) compared with four mpg for an engine and cost much less to purchase than an engine.”

1 Memphis (TN) Fire Services runs 12 ARVs to EMS calls instead of an engine or a truck. The ARVs are built on Ford F-350 crew cab pickup trucks. (Photos 1-3 courtesy of Memphis Fire Services.)

2 The Memphis ARV rigs have slide-out trays at the rear of the vehicle and compartmentation on each side.

Memphis Fire Services averages 108,000 runs a year, covered by 1,600 paid firefighters operating 53 engines, three quints, 21 trucks, 35 ambulances, and 12 ARV squads out of 57 stations. “Our ARVs average between 700 and 1,700 runs a year, depending on their location, and we have them spread out in our busiest neighborhoods,” Lock observes. “All the vehicles are set up the same in terms of the body and equipment, and we think the overall design is great. We would recommend an ARV program to any department as big as ours, and with the growth in EMS calls, the program has proven to be a great help to our department.”

Chapman says that Portland also is instituting a Street Response program designed to pull unnecessary 911 calls out of the system. “This will be a two-person operation, a firefighter and a mental health specialist, who will respond to calls where we are going back to the same individual over and over,” he says. “We’re discussing if we might have to transport the person to a mental health hospital in the area and, if the program takes that approach, we likely will consider a Ford Transit van with a patient area equipped in the cargo area. Portland already has a Community Health Assessment Program (CHAP) that uses a Transit van to reach out to high-volume users before they call 911.”

The Tucson Fire Department started its ARV program with five Ford F-350 pickups that the department calls “rescue trucks” for response to low-acuity EMS calls and those that don’t require transport to a hospital. The department runs the five ARVs out of stations 5, 7, 8, 10, and 14, according to Paul Moore, Tucson’s logistics deputy chief. He notes the rigs are extended-cab Fords with a slide-out tray in the back under a cap that holds supplemental tools, firefighter turnout gear, and medical equipment, since the rescue trucks also respond to fire calls as an added resource.

“They are staffed with a paramedic and an EMT who can give life support assessment, render care, and give appropriate counseling on whether to go a hospital or a primary care physician,” Moore says. The department, staffed by 633 paid firefighters who operate out of 22 fire stations, also runs 17 frontline advanced life support (ALS) ambulances and contracts with AMR for basic life support (BLS) ambulance transport.

Sharon McDonough, Tucson’s EMS deputy chief, notes that the crews of the rescue trucks perform a full survey of the patient “and could start ALS intervention immediately and call for additional resources if needed. Most of the time the crews are needed to rule out ALS intervention; they are sort of scouts for the medics.” McDonough notes that the majority of the calls Tucson’s ARV units go on are from 10 a.m. to 8 p.m., Monday through Friday. “That’s the biggest brunt of the calls right now, which also is the busiest time for all our other fire suppression and fire prevention units,” she says.

McDonough continues that the department has the stats to show that adding ARV rescue trucks would improve efficiencies in the department. “You have to factor in how much cheaper it is to run and maintain the smaller rescue trucks instead of a larger vehicle like an engine or a ladder,” she says. “We are very spread out over 235 square miles with a 521,000 population, and this is the single most efficient program we’ve ever had, hands down.”

The Mesa Fire and Medical Department started an EMS program several years ago that keeps low-acuity patients out of hospital emergency departments (EDs) and directs them to a more appropriate level of care for their particular situation though its Community Care Concept. Then the department identified another issue where behavioral-related calls like suicides and mental health problems were cropping up that the Community Care Units (CCUs—on Dodge 4500 chassis with Medtech bodies) were not equipped to handle. So, Mesa came up with a Community Care Specialist (CCS) unit on a Ford all-wheel-drive SUV powered by a 3.7-liter gasoline engine to handle those types of calls.

Since the Centers for Medicare and Medicaid grant that financed the programs ran out in 2018, Mesa stopped running the CCU ambulances and was not able to keep the CCUs running in a definitive care model with a physician or nurse practitioner on the rig, says Mark Keough, Mesa’s operations deputy chief. “We were trying to do definitive care under the 911 umbrella, but it was not sustainable,” he says. “There were no codes set up where we would be able to bill insurance programs.” Likewise, other elements of the program such as a nurse triage component, centralized medical direction, and out-of-hospital follow-ups were discontinued. “We still have the community behavioral health program run out of the Ford Explorers,” Keough says, “where we hold a patient to take them to more definitive care.”

Sam Greif, chief of Plano Fire-Rescue, says that Plano’s rescue squad program has been modified based on several years of data and experience. “We had two fully EMS-outfitted Chevrolet Suburbans that were designed to take the load off of two paramedic pumpers,” Grief points out. “Their goal was to run to low-acuity calls so the engines didn’t have to go out. Transport of patients is through the city’s eight ambulances.”

Greif says that Plano’s squad crews often found a low-acuity patient who still wanted to go to the hospital, meaning an ambulance had to be dispatched to the scene, tying up the ambulance and the squad. “Sometimes, the squad would get to a scene and find that two persons were not enough to handle a large, heavy patient, and an engine would still have to be dispatched,” he notes. “Ultimately, we deactivated one of the Suburban squads and stood up another 24-hour ALS ambulance that ran with paramedics hand-selected by physicians.”

He points out that the remaining squad was then sent to high-acuity calls centrally located in the response area. “They run to full arrests, major burns, accidents involving rollovers, and other high-acuity incidents,” Greif says. “Our medical director and EMS Assistant Chief Mark Gamber, MD, hand-picked the paramedics for the squad and meets with them weekly. A great result is that our cardiopulmonary resuscitation saves have gone up dramatically since changing the program.”