While apparatus manufacturers are providing better and more convenient access to the hosebed for firefighters, the arrangement of the various size hoses and preconnects varies depending on the department, its geographic location, and its operational strategy.

In some instances, because of the specific requirements of the fire department, some hosebed designs are achieving unique configurations.

Justin Howell, Sutphen Corp.’s southeast region sales manager, observes that Sutphen is being asked more frequently for lower hosebeds on the pumpers it builds. “Departments want hosebeds that are 60 inches off the ground, often with discharges at the rear,” Howell says. “There’s also a trend of moving to an all-in-one pumper that can handle fire suppression, carry rescue tools, and be an EMS response vehicle.” 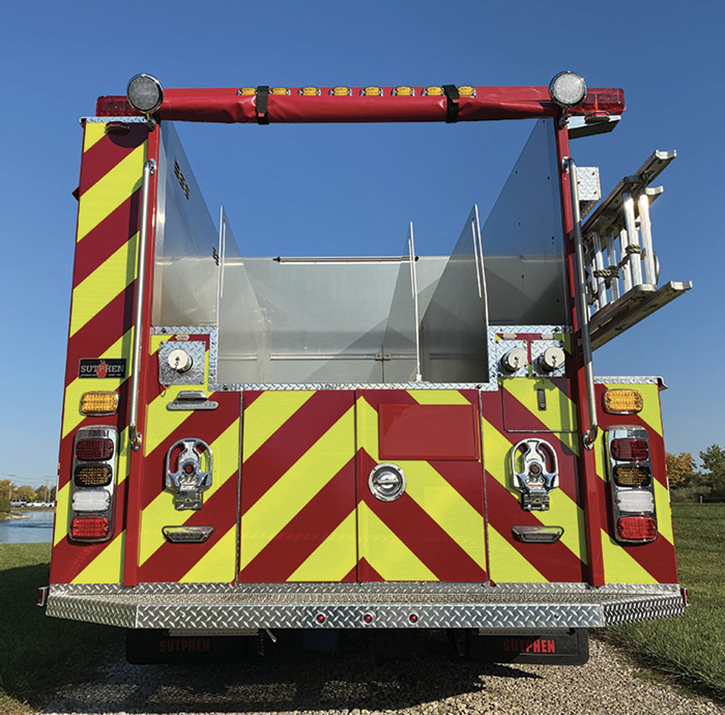 Howell notes that Sutphen recently built a low-hosebed concept pumper for the Orlando (FL) Fire Department where all of the handlines came off the rear of the rig. “It’s a side-mount pump, but there are no crosslays over the pump, with that area being used for EMS storage,” he says. “There are four 2½-inch discharges at the rear of the engine, with the hosebed set up for 1¾-inch hoselays on the outboard sides and larger-diameter hoselines working inward.”

Ken Sebo, pumper business development manager for Pierce Manufacturing Inc., says about 25 percent of the pumpers Piece builds have low hosebeds, from 68 to 70 inches off the ground, although some are even lower. “Low hosebeds are all about safety and easy access for firefighters,” Sebo points out. “Some departments are putting polypropylene trays on the bottom of the hosebed between dividers to more easily reload handlines, and we’ve even done some poly trays in a lower area under a traditional-height hosebed. Also, we’ve made provisions for carrying high-rise packs in between dividers in hosebeds, sometimes on poly trays.”

Sebo notes that some departments have requested preconnected discharges at the front of the hosebed for handlines, and when there’s not enough room on the rear wall, the outlets are set in the hosebed floor. “We also are seeing walkways in pumper hosebeds, usually about 18 inches wide, sometimes in place of where coffin compartments would be or often down the center. Almost every pumper we build carries large-diameter hose (LDH), so with rear preconnected hoselines, we often have to build in four or five divided storage areas for the various hoselays.”

Kevin Boysen, vice president of inside sales at Rosenbauer, says Rosenbauer recently built a low-hosebed pumper for Eastside (WA) Fire Rescue with an unusual divider arrangement. “There are two main divided areas in the hosebed, with the left side having four slots holding sliding trays and a dead lay storage area above,” Boysen says. “From outside in, there are two trays of 100 feet of 1¾-inch hose, one over the other, then two 150-foot vertical stack 1¾-inch hose loads and one 600-foot double stack hose load of 2½-inch hose. The second divided area holds 1,000 feet of 5-inch LDH.” 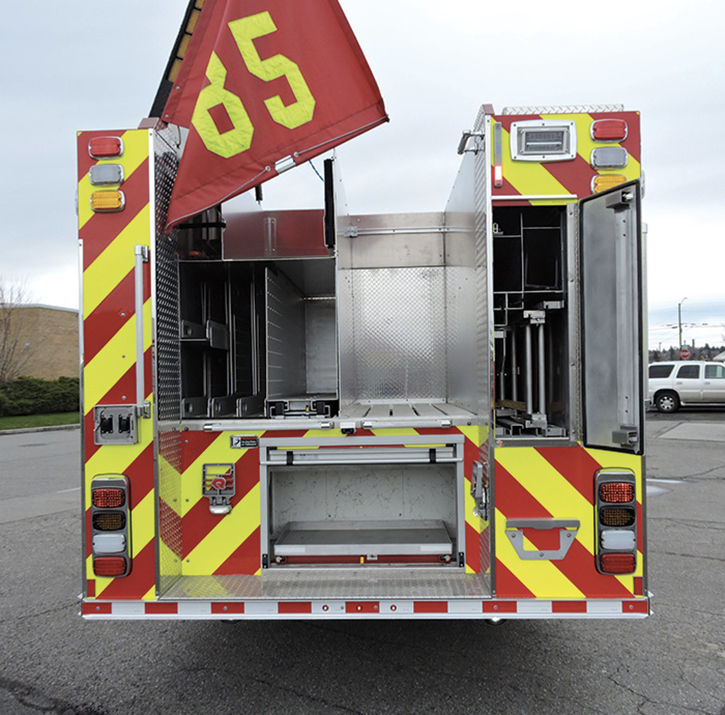 2 The low hosebed on this pumper that Rosenbauer built for Eastside (WA) Fire Rescue has an unusual divider arrangement, with four slots holding sliding polypropylene trays. (Photo 2 courtesy of Rosenbauer.)

For the Ventura County (CA) Fire Department, Rosenbauer built a pumper with a hosebed with five dividers and a center compartment holding a backboard, Boysen notes. “Left to right, the dividers hold 400 feet of 11⁄2-inch wildland hose above a horizontal divider with 50 feet of 21⁄2-inch hose and long-handled tools in the lower section, three wildland hose backpacks of 200 feet of 11⁄2-inch single jacket hose, 500 feet of double jacket 2½-inch hose, 300 feet of 13⁄4-inch hose on a divider over two 100-foot bundles of 13⁄4-inch hose, and 750 feet of 4-inch LDH,” he says.

Joe Hedges, product manager for chassis and aerials at E-ONE, points out that when hosebeds are lowered, they also are made shorter in length, generally 80 to 90 inches long compared to a traditional-height hosebed that’s 120 to 130 inches in length. “On some low hosebeds, the dividers get to be 30 inches tall, and we have to put notches in them so firefighters can move from one area to another and also brace or strap the dividers because they’re so tall,” Hedges says. 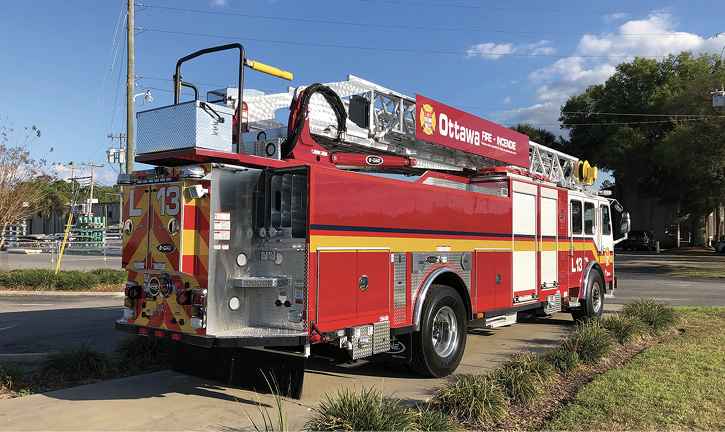 “We are doing double level dividers,” Hedges says, “where there’s a horizontal shelf to allow the department to carry 200 feet of 1¾-inch preconnected hose on the bottom and 200 feet of 1¾-inch dead lay on top. To the right of that divider is an open area to carry a lot of 5-inch LDH. We also have done some single stacks for attack lines coming out of the back of a pumper and built one pumper with two 1¾-inch preconnects of 200 feet each in hose trays under the main hosebed. For hosebeds on aerials, we’ve been doing the SideStacker™ hosebed for quite a few years, with a center hosebed and twin chutes. The Ottawa (Canada) Fire Services has both LDH and preconnects inside its SideStacker, carrying 500 feet of 5-inch LDH, 300 feet of preconnected 2½-inch hose, and 300 feet of preconnected 1¾-inch hose and no preconnects over the side-mount pump or in the front bumper.”

Wyatt Compton, product manager for Spartan ER, says Spartan has seen hosebeds go from a place for hose storage to being used for tactical considerations. “Departments are looking to keep their firefighters on the ground, and that means lower hosebeds and hose storage areas,” Compton says. “Departments have added to their crosslay configurations by putting discharges and preconnects at the rear of their pumpers, with some putting gated wyes on a 2½-inch rear discharge to give them two 1¾-inch attack lines.”

For aerials, Spartan ER makes a moving hosebed that uses electric over hydraulic to come out and down from the back of the aerial. “It’s a set of bed rails where the last three feet drop down to 10 inches off the ground and it is made to hold 1,000 feet of LDH, although the drop height can be changed and it can be made with dividers if needed,” Compton says. 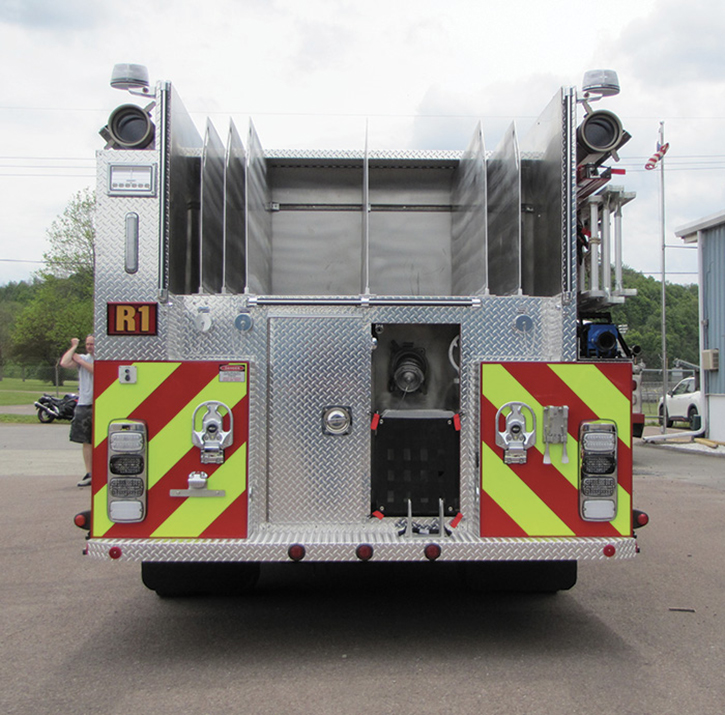 Joe Messmer, president of Summit Fire Apparatus, agrees with Hedges on divider height in low hosebeds. “Dividers are a challenge on low hosebeds because to get the hose capacity, it has to be a real tall stack, which means the dividers have to be braced to prevent them from falling over,” Messmer says. “We’ve done both single- and double-stack hose in low-hosebed dividers. If they only want 200 feet of 1¾-inch hose, we can do a single stack, but for 500 feet of 2½-inch, it has to be a double stack.” 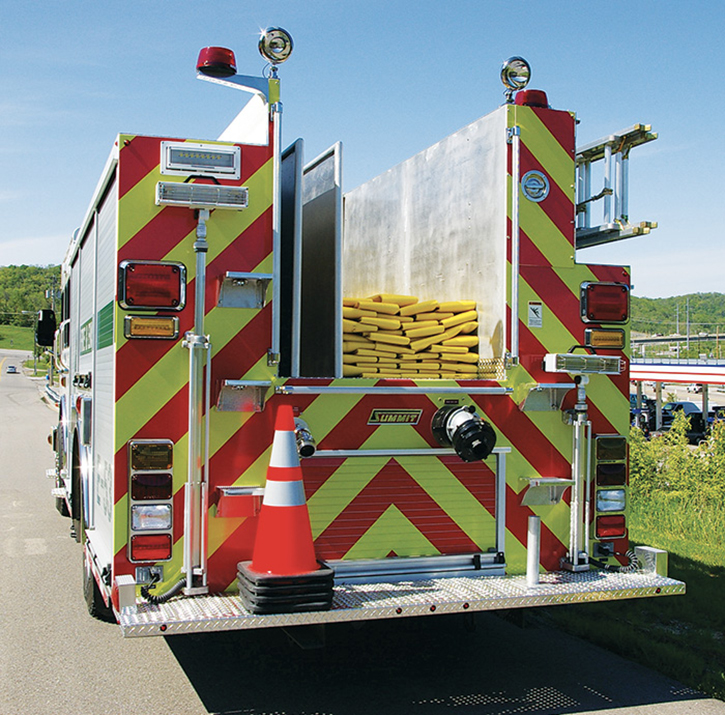 Brett Jensen, vice president and general manager of Midwest Fire, says his company builds a lot of wildland engines for CAL FIRE with a distinctive hosebed. “It’s a three-section hosebed where the two end sections hold hose and the center section is closed off to store their wildland packs,” Jensen says. 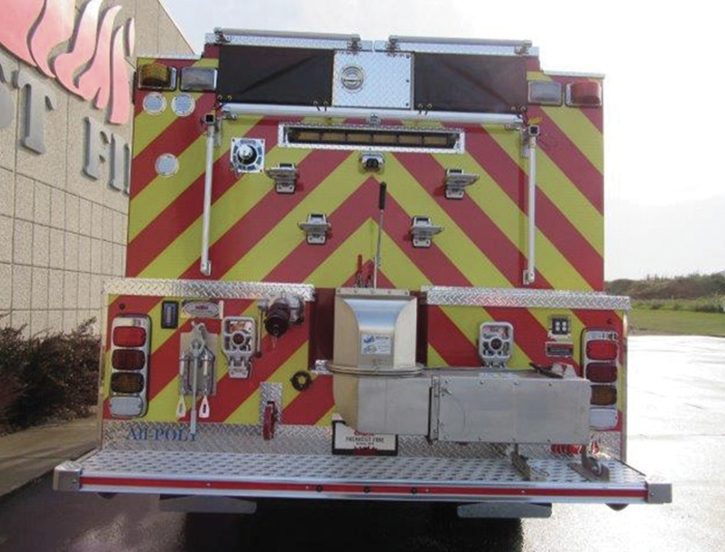 6 Midwest Fire built this pumper with a split hosebed around a center compartment and with a 2½-inch rear discharge for CAL FIRE in Madera. (Photo 6 courtesy of Midwest Fire.) 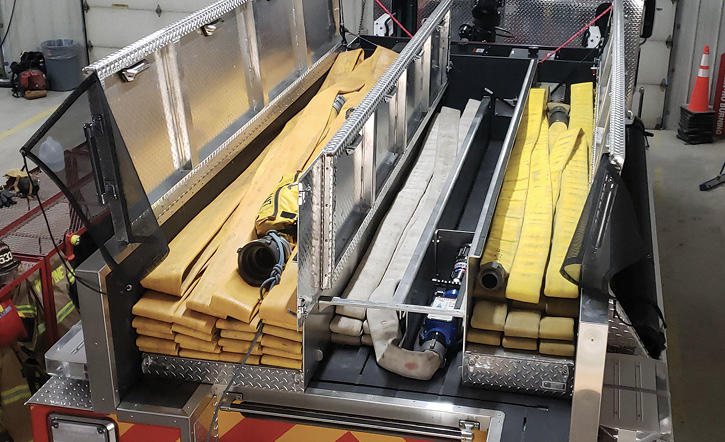 Grant Spencer, vice president at Spencer Manufacturing, says Spencer built a low-hosebed pumper for the Pittsburgh (PA) Fire Department with a five-divider hosebed and two rear discharges. “From left, there’s 200 feet of 2½-inch hose, 200 feet of 3-inch dead lay, 1,000 feet of 5-inch LDH, 500 feet of 3-inch hose, and 250 feet of 1¾-inch. The discharges are positioned at the low ends of the hosebed so they can be used for attack or supply.” 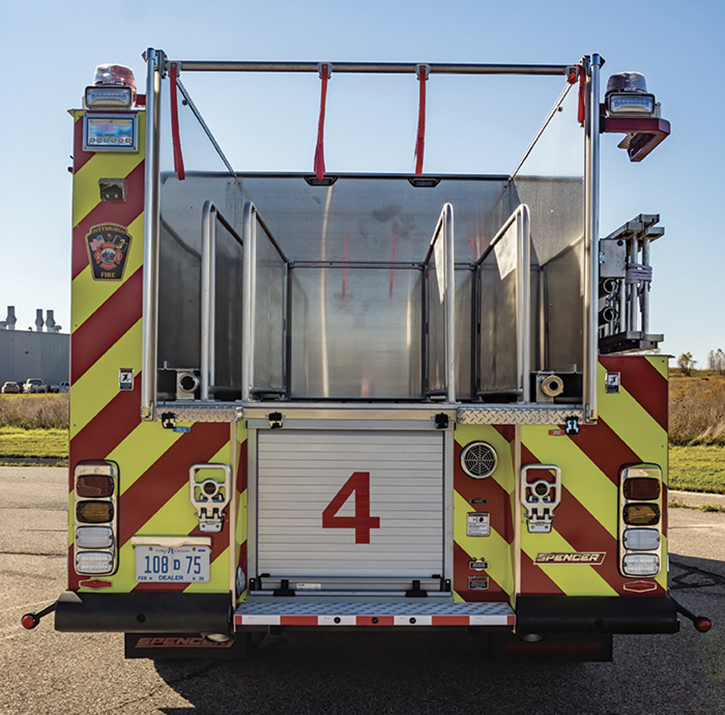 Mike Watts, national sales manager for Toyne, says that while most departments use a standard rectangular hosebed, others have modified hosebeds that incorporate storage on top of the side compartments for more hose or to keep the overall apparatus height down. 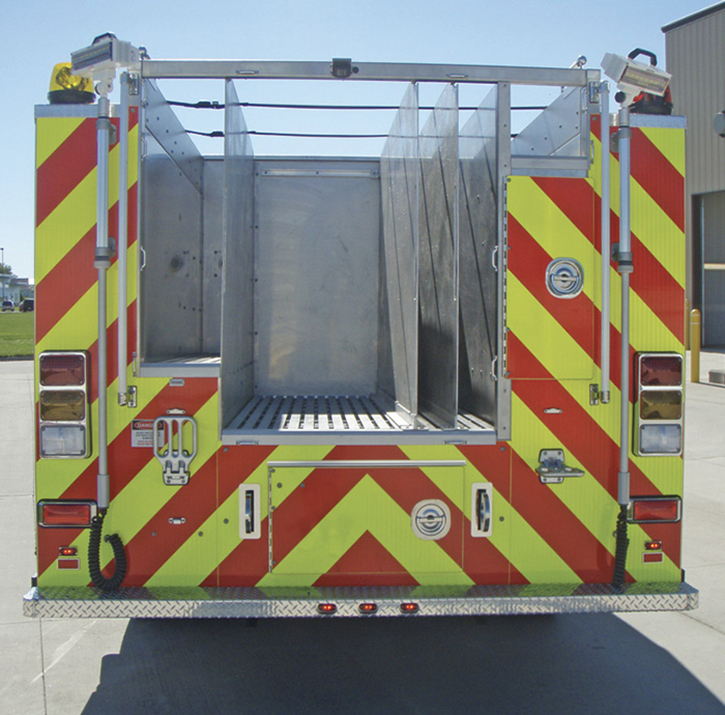 9  Toyne built this pumper with a hosebed at frame height, which required very deep dividers. (Photo 9 courtesy of Toyne.) 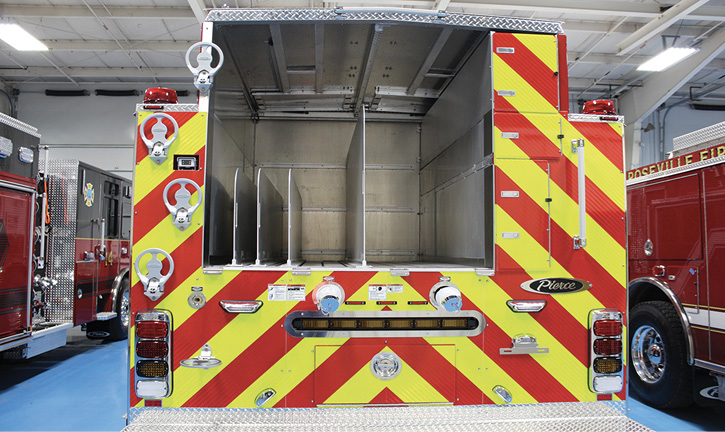