The Denver (CO) Fire Department (DFD) provides fire protection coverage for a population of around 690,000 over 155 square miles divided into seven districts. This fire protection also extends to the residents of Sheridan, Glendale, Skyline, and Englewood.

Arranged in seven battalions with 38 stations, the DFD’s major urban apparatus components consist of 32 engines, nine trucks, eight platforms, one heavy rescue truck, one decontamination rig, one hazmat, and one water rescue truck. The DFD doesn’t use tiller-ladder trucks, and most of their trucks share a common frame, mainly manufactured by Pierce. 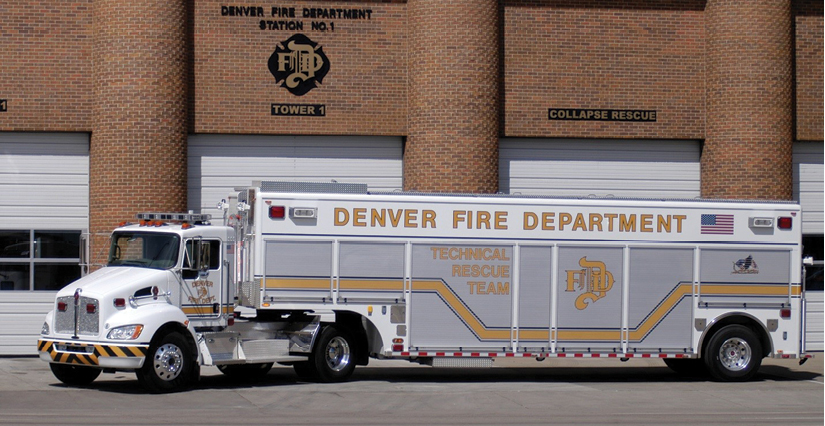 Chief Phillip Morelli of the DFD Special Operations Division explains the organizational structure of the DFD rescue teams. “The rescue teams consist of high-angle, confined space, trench, structural collapse, water rescue, and hazardous materials rescue,” he says. “Currently Rescue 1 is assigned to all the above rescues. Tower 1 and Engine 1 are assigned to high-angle, confined space, trench, collapse, and water rescue calls. HAMER 1 responds to hazmat and confined space calls. HAMER stands for hazardous materials emergency response. Starting in January 2018, Rescue 2 will be in service with the same capabilities as Rescue 1.” A confined space/collapse rescue rounds out these DFD apparatus. 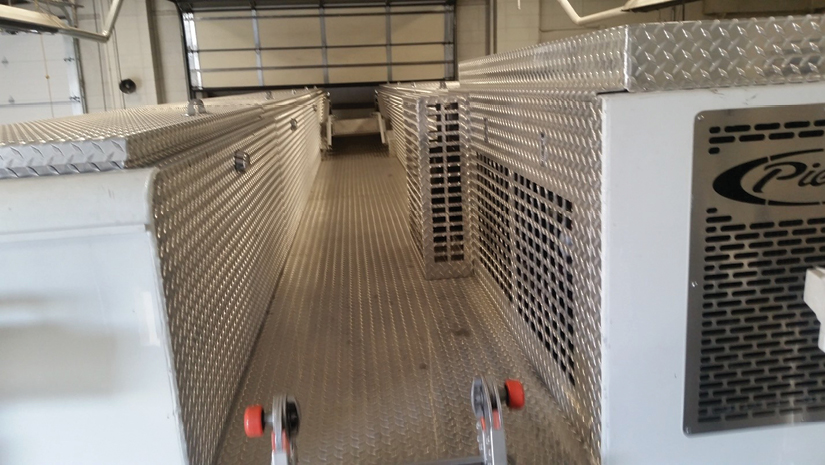 2 The trailer’s roof aisle showing the nine compartments on top and the rear drop-down ladder at the end of the aisle. (Photo courtesy of Greg Pixley.)

A unique vehicle in the DFD apparatus inventory is a 2008 Kenworth T-600 technical rescue semi with custom-built Pierce trailer. According to Captain Greg Pixley, the DFD’s public information officer, it was grant-funded and bought on April 4, 2008 for the Denver Democratic Convention. This apparatus has a gross vehicle weight rating of 61,000 pounds and a length of 46 feet 8 inches.

The DFD calls its Kenworth technical rescue semi the collapse rig but, for a long time, it was referred to by the nickname trench trailer since it was used for trench rescues. However, the need for a building collapse rescue response renamed the rig. This tractor trailer has its own assigned bay with the nameplate “Collapse Rescue” and shares Station 1 with four other apparatus bays: Chief 2, Engine 1, Tower 1, and Water Rescue. 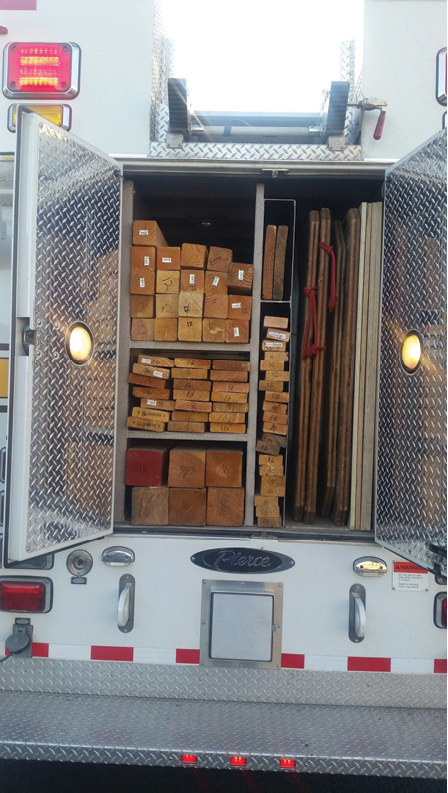 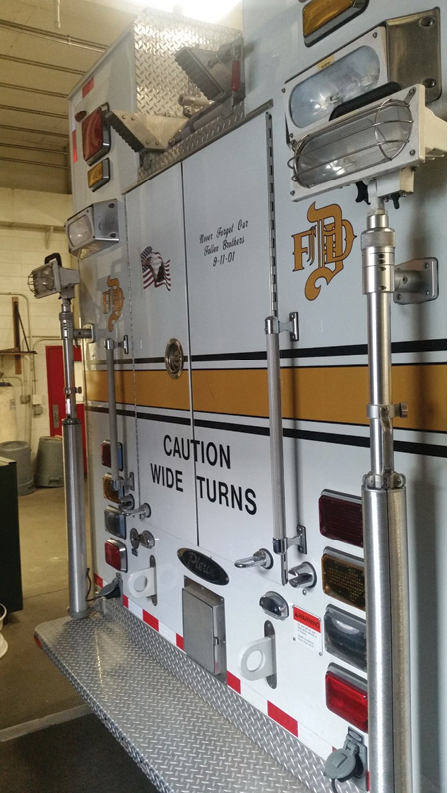 3 The open rear doors showing the long shoring lumber and boards. (Photo courtesy of Greg Pixley) 4 A complete view of the rear of the trailer. Note the wide diamond plate rear bumper, the taillights and floodlights, the rear doors, the drop-down ladder, the gray electrical outlets, logo and 9-11 graphics, and red and white Dept. of Transportation tape. (Photo courtesy of Greg Pixley.)

“It is under the direction of the Tower 1 captain, Dave Powell,” says Morelli. “The collapse rig responds to all confined space, trench, and structural collapse calls. The two firefighters from Tower 1 drive the collapse rig, while the officer and engineer respond with Tower 1.

“Ninety percent of the equipment on the semi is for collapse and trench calls,” he continues. “The rig has a cascade system to supply rescue air for confined space and tool air for all equipment. There is a reserve collapse semi, which is at Station 18. It is used when the front-line rig is out of service. The reserve has all the same equipment as the front-line truck. The captain of Tower 1 is in charge of this rig also.

As with most of DFD’s apparatus, the collapse rig is painted white with broad yellow side striping and yellow lettering declaring “Denver Fire Department” and “Technical Rescue Team” on the trailer sides. Diamond plate covers the sides and rear bumper of the trailer and also the walkable areas of the semi’s bed and trailer’s roof.

The unit’s tractor contains two red warning lights on the grille and one on the side of the hood and cab, chrome airhorns on the hood sides, and a red lightbar running the width of the roof. It has a Paccar PX8 330-horsepower engine and an Allison 3000 EVS automatic transmission. Black and yellow warning chevrons cover the gray bumper. On the tractor’s bed frame behind the chrome gas tanks is a wide stainless steel step that allows for pass-through access to the third wheel, the tractor-to-trailer hose connections, and a movable Little Giant ladder located on the front of the trailer. The interior of the cab has a portable radio holder, David Clark headset communication system, mobile data terminal on the center console, and lightbar controls.

The collapse rig has no vertical smokestack. Instead, the exhaust goes through a muffler and the tailpipe exits out the passenger side before the cab’s dual rear wheels.

Box of Feathers and Wedges

Box of Bits/Tube of Grease

Can of Duplex Nails

Box Tyvex with No Booties

Bucket of Respirators and Cartridges

The front of the Pierce trailer has two pole-mounted floodlights opposite each other with a ladder leading to the open aisle between the two long side equipment compartments. The trailer has nine compartments on the top, and each side is divided into seven compartments for a total of 14 roll-up doors with two swing-open doors at the rear. The roll-up doors came as brushed silver aluminum, and the rear doors are painted white. A red and white bar sticker along the bottom of the trailer’s full height roll-up doors. The top side corners of the trailer have a red warning light and a spotlight.

The rear has two electric outlets for running power tools below the bank of taillights right above the rear bumper. Two pole-mounted floodlights flank the vertical lights. The top corners of the trailer also have two fixed spotlights with an amber warning light and red warning light above. Two vertical handhold rails flank two white swing-open rear doors and above that is a 10-foot drop down ladder that can be pulled off the top of the trailer and extended to the ground for roof access. The two white rear doors lead to a compartment running the length of the trailer and houses the longest shoring timber for collapse rescues.

According to Morelli, the trailer does not have any standing jacks and was never separated from the tractor at the scene or at the station. Since 2008, the DFD has never replaced either the semi or the trailer separately, although some modifications were made to the trailer by Denver City Shops upon delivery from Pierce. The collapse rig is purely one unit; there is no external rescue crane and no intention for the Kenworth T-600 tractor to haul any other trailer. The DFD’s reserve technical rescue vehicle is a 1990 Ford L8000 beer delivery tractor and trailer donated to the DFD by the Coors Brewing Company. It looks somewhat similar to the Kenworth T-600 setup, but it wasn’t purpose-built, and the lower trailer has no emergency flashers, floodlights, treadplate, or walk-on roof with rooftop storage compartments.

The DFD considers this collapse rig as the first responder to any collapse, trench, or confined space rescue call and not a supporting vehicle to HAMER 1, Rescue 1, Engine 1, and Tower 1, which also roll to these calls.

Despite the DFD’s HAMER 1, Rescue 1, and Rescue 2 rigs being tandem-axle box designs, the collapse rig’s tractor-trailer design has no equal counterpart in the Denver metropolitan area and, according to Morelli, doesn’t roll outside of city limits for calls, such as climbing the Rocky Mountains to the west of the city. If the collapse rig ever breaks down and repairs cannot be made in the field, the DFD calls for a large tow truck to haul the apparatus to the city repair shops as one unit (since the trailer has no standing jacks to be left behind for another semi-tractor to tow it). Morelli states that if the DFD had to purchase the technical rescue rig again, it would choose the same design because the trailer can carry a huge amount of long lumber.

“Driving the semi is completely different than HAMER 1 and Rescue 1,” says Morelli. “There is a need for added training on the semi-trailer in addition to normal driver training. There is a great learning curve for members who operate the rig. The hardest part of driving the collapse rig is backing [it] up to the firehouse. With modifications to the headquarters several years ago, the drive-through was enclosed. Modifications were made to the back bay doors of Station 1, but the collapse rig has to back up the trailer into the bay from the front. On most incidents, the incident commander saves room [at the scene] for the rig to [park and deploy to] reduce the distance from the structure or call.

“All technicians assigned to [the collapse rig] are required to drive the semi-trailer, bringing the number to nine at the minimum. The only members who are allowed to drive are assigned to Tower 1 and Engine 1. There are job performance requirements for members to complete prior to driving the collapse rig.”