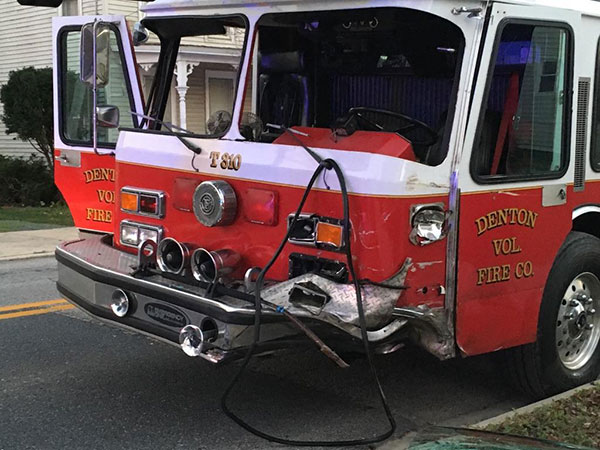 On Friday, December 4, 2015 at 4:03 p.m., the Denton (MD) Volunteer Fire Company (DVFC) was dispatched to assist the Goldsboro Volunteer Fire Company for a reported automobile fire impinging upon a home. While responding Northbound on 6th Street, Tower 310 from Denton was involved in a collision at North 6th Street and Gay Street in the town of Denton.

The 30-year-old driver of the tower suffered a medical emergency and the tower collided with a civilian SUV and a utility pole before coming to a stop a distance away. Two civilians and three firefighters were injured. The driver of the SUV became entrapped in the vehicle and was extricated quickly by the Denton and Greensboro Fire Companies. The driver and passenger of the SUV were transported to R. Adams Cowley Trauma Center in Baltimore by Maryland State Police Aviation Trooper 1 with serious but nonlife-threating injuries. The three firefighters were transported to University of Maryland Shore Medical Center at Easton. All three firefighters were treated and released.

The 1985 E-One Tower suffered extensive damage and will remain out of service for an extended period of time. Its ultimate fate has yet to be determined.

The Denton Volunteer Fire Company would like to extend our well wishes and a speedy recovery to the injured civilians. The DVFC greatly appreciates the overwhelming support and response from our neighboring fire departments, first responders, and the local community.