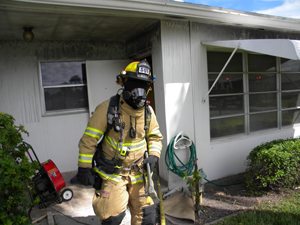 On September 17, 2012, Delray Beach Fire-Rescue (DBFR) was dispatched to reports of a structure fire. Dispatchers advised units that there was smoke in the building and that residents were feeling short of breath. DBFR’s first arriving unit was EMS Supervisor Captain Steven Press. Captain Press found two residents in the doorway of the structure with heavy smoke pushing out the door behind them. One of the residents was unable to stand and another resident was too weak to move without assistance. Captain Press immediately pulled the first resident away from the building and then returned to assist the second with the assistance from the first arriving engine company from Station 4.

Once all residents were cleared from the hazardous environment Engine 4’s crew entered the structure with Truck 5’s crew to extinguish the fire. The seat of the fire appeared to be located in a closet near a bedroom and was extinguished within minutes of entering the structure. Fire had also extended into the roof and caused damage to various structural members of the roof. The fire is still under investigation by the Delray Beach Fire Safety Division.

Two of the three residents were transported to Delray Medical Center for treatment of smoke inhalation. The third resident was treated and released on scene. No firefighters were injured.