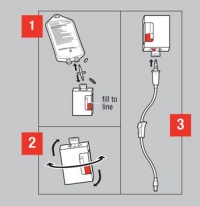 Meridian Medical Technologies, Inc., a Pfizer company (NYSE: PFE), today announced the U.S. launch of a new single-vial dose of CYANOKIT® (hydroxocobalamin for injection) 5 g. In this new presentation of CYANOKIT®, the entire starting dose of 5 g hydroxocobalamin is now provided in a single vial, replacing the previous kit containing two, 2.5-g vials. CYANOKIT® is approved by the U.S. Food and Drug Administration for the treatment of either known or suspected cyanide poisoning.[i]

“Cyanide may be found within the smoke of some closed-space fires and is an important factor in some deaths caused by smoke inhalation. Cyanide poisoning is a life-threatening situation requiring immediate medical attention. The ability of first responders to recognize symptoms and treat victims of known or suspected cyanide poisoning quickly and efficiently–meaning, on the scene–could mean the difference between life and death,” said Rob Schnepp[1], chief of special operations with the Alameda County (Calif.) Fire Department.

In addition to the full starting dose of CYANOKIT® 5 g now contained in a single vial, the new packaging is more compact than the previous presentation.[2] The new dose also features a 20 percent greater shelf life (36 months from the date of formulation). CYANOKIT 5 g is available for sale beginning this month.

“Meridian has a long history of supplying emergency care products to first responders and the medical community,” said Tom Handel, senior vice president of Commercial Pharmaceuticals for Meridian Medical Technologies, Inc. “Offering a new single-vial dose of CYANOKIT® is consistent with our company’s mission, as it will help streamline the administration process in a situation that requires an immediate response.”

Cyanide (CN) can be released by virtually any material containing carbon and nitrogen when burned under high temperature and low oxygen conditions.[ii]There is potential for CN toxicity due to the increased use of synthetic materials that produce CN during combustion in closed-space fires.2,3 Moderate to high concentrations of cyanide can cause severe injury and death within minutes.[iv]

Currently, there is no diagnostic test to confirm CN poisoning within the limited window for initiating potentially lifesaving intervention.2,3 In addition, CN poisoning can be difficult to differentiate with carbon monoxide (CO) poisoning due to common signs and symptoms.2

CN poisoning should be suspected in smoke inhalation victims if the following manifestations are present[3]1,4:

CYANOKIT® is indicated for the treatment of known or suspected cyanide poisoning. CYANOKIT® is administered intravenously after being reconstituted with sodium chloride for injection. Hydroxocobalamin, the main component in CYANOKIT®, strongly binds the cyanide directly, forming a natural form of vitamin B12, cyanocobalamin, which is excreted in the urine.4

CYANOKIT® was approved by the U.S. Food and Drug Administration in 2006. It has been generally well-tolerated, even in cases where cyanide poisoning is not present.