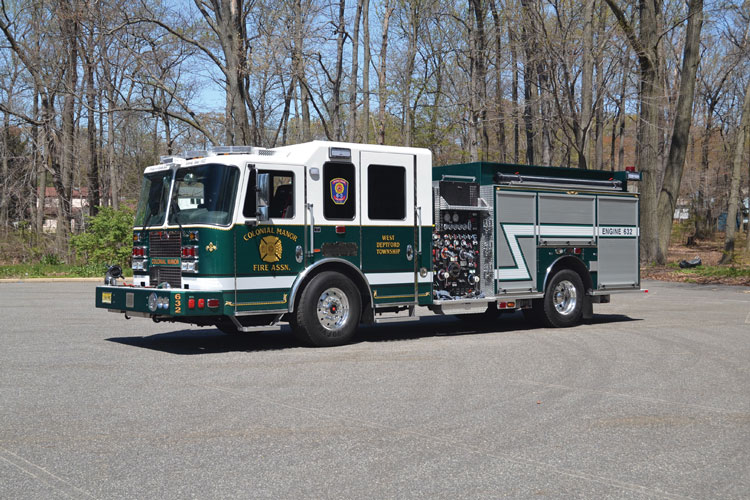 A New Jersey fire association, in need of a heavy-duty pumper to protect a refinery, recently received a grant from the oil company that owns the refinery to purchase a custom foam pumper.

The Colonial Manor (NJ) Fire Association is one of four all-volunteer fire agencies protecting the township of West Deptford, New Jersey, where it has the Eagle Point Sunoco refinery in its fire protection area. Colonial Manor also houses the Gloucester County (NJ) Foam Task Force at its station – an International chassis foam tender (tanker) holding 4,000 gallons of Universal Gold foam. “It was a long time in getting the grant from Sunoco to allow us to purchase the KME pumper along with a rescue-pumper for our neighboring Verga (NJ) Fire Company,” says Colonial Manor Chief Fred Lock, “but we were very pleased when it came through. It was a partial payment on the two trucks, and the township came up with the balance for the two vehicles.”

Colonial Manor spec’d a custom foam pumper that ultimately was built by KME on a Predator™ Panther 4×2 long four-door chassis and cab with a 10-inch raised roof and seating for six firefighters. The rig has a 152-inch Challenger LH body that’s constructed of 3⁄16-inch-thick aluminum, is 32 feet long overall, is 9 feet 9 inches high overall, and has a wheelbase of 197 inches.

Powered by a Cummins 450-horsepower (hp) ISL9 diesel engine and Allison 3000 EVS automatic transmission, the KME pumper carries a Hale QMax-175 1,750-gallon-per-minute (gpm) single-stage pump, a 750-gallon UPF Poly water tank, an integral 30-gallon foam cell, a Feecon around-the-pump APH 1.5 foam system, and an Akron 95-gpm foam eductor. “We wanted two foam systems onboard the vehicle,” Lock says. “We wanted the capability to start a foam operation with the 30 gallons of foam on the pumper and then to use the additional 250 gallons of foam we carry on our rescue-pumper or the 4,000 gallons of foam off the county tender using the Feecon foam system. If we needed to operate out of a five-gallon pail or 55-gallon drum, we could use the Akron foam eductor.”

Lock points out that the new KME pumper replaces a 1989 Ford Maxim open-cab pumper “that was outdated per National Fire Protection Association (NFPA) standards. Once we got the new KME, we set up the Maxim as our rapid intervention team (RIT) pumper for mutual aid into surrounding towns.” The new KME also pumper serves as the department’s RIT unit, having a Stokes basket compartment placed under the rig’s low-height hosebed.

Ryan Slane, KME’s product manager for pumpers and tankers, says that KME’s use of an L-style water tank (unlike a rectangular or T-style water tank) allowed KME to lower the hosebed to 57 inches off the ground and still have room for the Stokes basket compartment underneath it. “In addition, at the rear of the two crosslays near the pump panel (250 feet each of 1¾-inch hose with Akron Brass nozzles), we were able to place two backboards crosswise on end,” Slane notes.

Skip Stinger, fire service sales manager for First Priority Emergency Vehicles, who sold the pumper to Colonial Manor, says First Priority had sold the department a rescue-pumper in 2001, so his company had a familiarity with the fire association and its specific needs. “The department liked the previous KME pumper it bought from us,” Stinger says, “and it knew what it wanted in the new pumper because it has firefighters who worked in the refinery and knew their foam.”

Stinger points out that Colonial Manor wanted a shorter wheelbase and shorter overall length on the new pumper compared with its previous KME rescue pumper. “The earlier one was set up as a rescue-pumper with a heavy foam capability,” he observes. “The new pumper is more of a first-due pumper that can handle any foam situation.”

Lock concurs with Stinger’s assessment. “The new KME pumper, our Engine 632, runs first out on almost all fire calls with the exception of motor vehicle crashes, which are run first out by our rescue-pumper,” Locke says. “And while the rescue-pumper is set up with Hurst hydraulic rescue tools, the new KME pumper is set up as our RIT response vehicle. The rest of the compartments and equipment locations are pretty much standardized between the two vehicles.”

Lock says that firefighters have adapted very well to the new KME pumper. “It has been pretty flawless for us and operates within our specific needs,” he notes. “We got pretty much what we wanted in the pumper because you do what you can to stay within the budget that you have to work with.”

Service area: Provides fire protection and rescue to 18 square miles and a population of 21,677 in the township of West Deptford, New Jersey. Fire protection area includes fire and rescue response along Interstate 29, which runs through the center of the fire district; the Eagle Point Sunoco refinery; some commercial; and many suburban residential structures. Responds townwide, gives and receives mutual aid from three other departments in the township: Verga Fire Company, Greenfields Fire Association, and Thorofare Fire Company.