The Princeton (NJ) First Aid & Rescue Squad wanted a custom ambulance that it could station at Princeton University during the school year and turned to PL Custom Emergency Vehicles to build the rig.

Frank Setnicky, director of the Princeton First Aid & Rescue Squad, says the Squad provides ambulance and rescue services to the 18 square miles of the borough of Princeton with a population of about 30,000 residents that doubles when Princeton University is in session. “We wanted a pretty straightforward ambulance without a lot of bells and whistles but with some customized design features,” Setnicky says. “This new rig was going to be stationed on the Princeton University campus during school classes.” 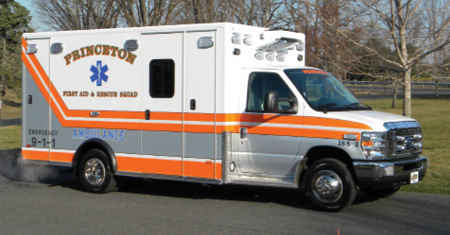 Chad Newsome, national sales manager for P.L. Custom Body and Equipment Co., Inc., parent company of PL Custom Emergency Vehicles, says Princeton had taken the design of its then current ambulances and worked with him to develop the design it wanted on a new rig. “It went through a request for proposal (RFP) process and solicited information from several vendors,” Newsome points out. “Then Princeton whittled the proposals down to its most recent vehicle provider and us. We got the contract.”

Newsome notes that PL Custom installed a combination 12-volt/110-volt heating and air-conditioning (HVAC) system in the Princeton ambulance because the rig would be stored outside at Princeton University during the school year and would need to be plugged into shore power when on site. PL Custom installed dual shore lines on the ambulance, one each side—the first for standard charging and the other for charging the HVAC system. 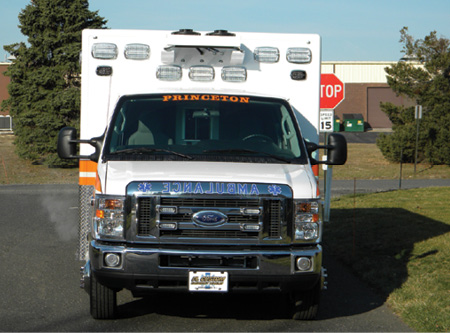 2 The PL Custom ambulance for Princeton has all Whelen LED warning, scene, compartment, interior, and underbody lighting along with a Whelen Howler siren.

“The Princeton Squad also wanted a custom configuration on the body itself,” Newsome says. “Of the five exterior storage compartments, only one of them was a standard compartment. The driver’s side rear compartment was ¾ high with double doors, and the passenger side forward was a full-height compartment.”

Custom features also include pushbutton keyless activation at the rear of the ambulance, Newsome says, and inside the patient module there are six-point seat belt harnesses, restocking cabinetry that allows the face of the cabinet to flip up for restocking consumables, and a custom interior on the street side. 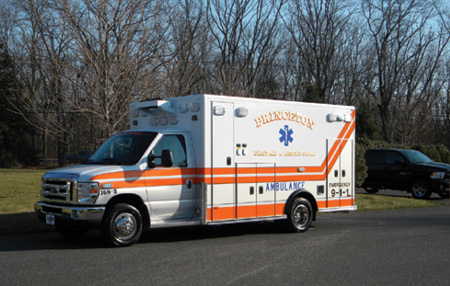 3 The wheelbase on the Princeton ambulance is 158 inches, overall length is 22 feet 11 inches, and overall height is 8 feet 11 inches.

Newsome says the rig has a captain’s chair with six-point seat belt harness at the head of the cot, while the curbside has a squad bench with six-point seat belt harnesses, custom upper storage with 43 inches of headroom, glove boxes for four different sizes, a recessed oxygen unit in the step well, and a cargo net at the head of the squad bench. “We also did a lot of passive safety features like radiusing of the countertops and corners of the interior compartments,” Newsome adds, “so there are no sharp strike points on the interior of the module.”

Setnicky notes that the new PL Custom ambulance “is not a multiplexed truck; it’s hard wired and set up as our previous ambulance for how we carry our patient and equipment. But, we went to a simpler custom design that has a new Stryker system in the module.” 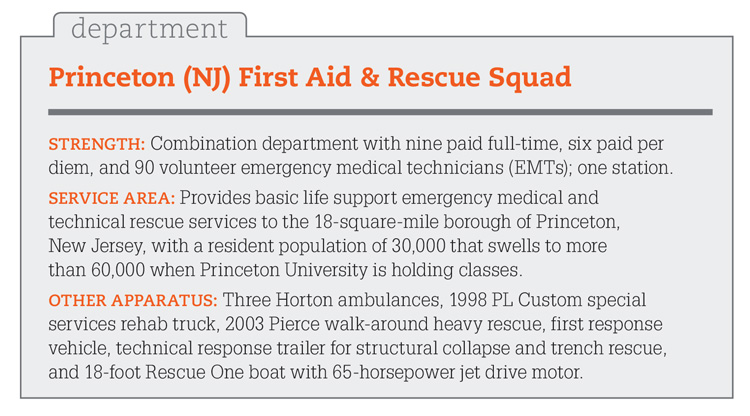 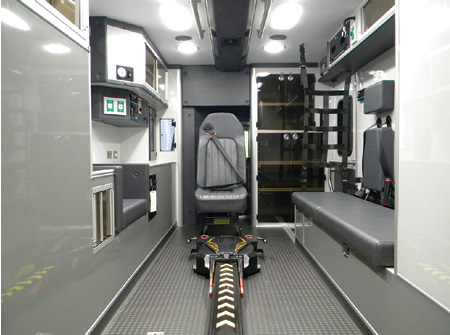 4 The interior of the PL Custom ambulance features a Stryker Power-Load system and a three-point seat belt harness for the captain’s chair at the head of the cot and for and streetside seating.

“All of our people are EMTs and provide basic life support services,” he says. “Capital Health provides the advanced life support in our area where the medics come in by fly car. We also do rescue services, like trench and structural collapse, confined space, and motor vehicle accidents and extrications, where we are assisted by the Princeton (NJ) Fire Department.”

Setnicky says that the squad gets a lot of volunteer participation from the students at Princeton University. “A large number of our volunteers are Princeton students,” he points out. “They usually stay with us while they are at the university, and some of them often go on to work in other medical fields.” 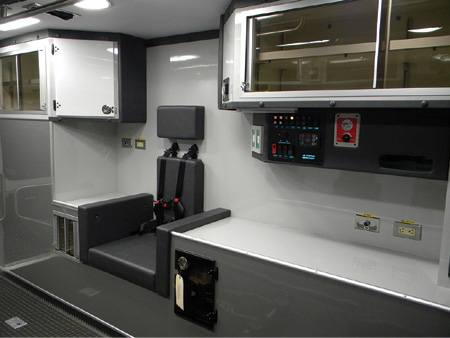 5 Passive safety features on the interior of the module include radiusing of countertops and corners and 45-degree angles on cabinets to eliminate sharp strike points.

He notes that working with PL Custom Emergency Vehicles was “an awesome experience. The company is still family-owned, so you are not just a number in the system,” he adds. “PL Custom has excellent attention to customer service, and the quality of its ambulances is outstanding. We are only about an hour away from its manufacturing facility, so we could visit regularly. And when the ambulance was finished building, no corrections were needed. It was a seamless process.” 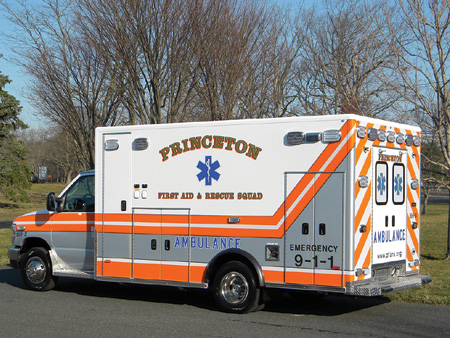 6 PL Custom built four custom exterior compartments into the Princeton ambulance, with the fifth compartment being a standard one.