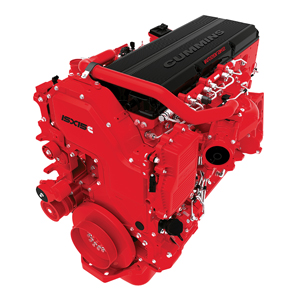 Cummins is building on the success of its current Heavy-Duty and MidRange products with improvements made to all existing base engines for 2013. For 2013, Cummins will offer the fire and emergency vehicle market four choices in clean-diesel power – the ISX15, ISX12, ISL9, and ISB6.7. Continuous product improvements to Cummins fully integrated components such as the XPI fuel system, VGT(TM) Turbocharger and Cummins Aftertreatment System with Diesel Particulate Filter (DPF) and Selective Catalytic Reduction (SCR) deliver improved reliability, durability and fuel economy for 2013. All engines will share a new single Electronic Control Module (ECM) that will manage both the engine and the Cummins Aftertreatment System for improved overall combustion efficiency. In addition, these engines meet the 2013 U.S. Environmental Protection Agency (EPA) regulations as well as the 2014 EPA greenhouse gas (GHG) and U.S. Department of Transportation (DOT) fuel efficiency standards.

“Cummins is dedicated to offering a complete lineup of dependable engines for our customers,” stated Dave Koppenhofer, Executive Director – OEM Sales and Support. “With improvements to our proven technology and no major hardware changes for 2013, our engines will deliver optimal performance with better reliability, durability and fuel economy.”

The 2013 ISL9, with ratings from 270 hp to 450 hp (201-336 kW), and the ISB6.7, with ratings from 260 hp to 360 hp (194-269 kW), continue to deliver the same proven dependability and reliability that customers have come to expect. The addition of an air intake throttle for 2013 on both engines enhances the overall efficiency of the Exhaust Gas Recirculation (EGR) system, leading to improved fuel economy. In addition, both engines now feature NanoNet(TM) media in the fuel filter, which provides up to 10 times better protection for fuel injectors.

Cummins 2013 engines also feature an improved electronic calibration that is specific for fire and emergency vehicles. This new calibration eliminates any emissions related vehicle speed or engine torque derates. Some 2013 ISX15 and ISX12 engines built in early 2013 may require a calibration update to eliminate emissions related derates. Customers with 2013 engines can contact Cummins Care at 1-800-DIESELS(TM) (1-800-343- 7357) with their Engine Serial Number (ESN) for more information on this calibration update.

Cummins Care will continue to provide access to customer support free of charge for all Cummins engines by calling 1-800-DIESELS (1-800-343- 7357). Built on Cummins strong commitment to customer support, Cummins Care provides a trusted information source for questions regarding the latest engines, aftertreatment and related technology. The Cummins Care team is prepared to answer all operational questions on topics such as fuel and oil specifications and maintenance intervals, and can provide assistance during a repair or service event. Customers also have access to the largest and most capable service network in the United States and Canada, with over 3,500 locations.