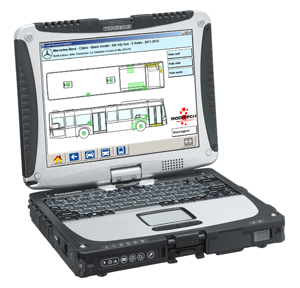 Moditech’s Crash Recovery System (CRS) now includes an additional database which provides rescue-relevant data for buses to emergency responders. The new database was released at the beginning of April and contains a selection of vehicles available on the European market. Additional vehicles will be added to the database with subsequent updates.

So far, the Crash Recovery System covers all cars, vans, and heavy trucks equipped with at least one (optional) airbag. The uniform and interactive vehicle schematics allow emergency responders to quickly identify hazards and problem areas, such as airbags and body reinforcements. In addition, the CRS contains illustrated deactivation and handling instructions, allowing rescuers to work quicker and safer.

With the release of the new database, this information will now be available for buses. Although neither city buses nor coaches are equipped with supplemental restraint systems such as airbags, traffic accidents with buses are still a technical challenge for emergency personnel.

This applies in particular if the vehicle is equipped with an alternative propulsion system. Therefore, the vehicle data in the CRS contains information about the location of vehicle batteries, main battery switches, fuel tanks and other relevant components of the alternative propulsion system. Step-by-step instructions on the deactivation of these vehicle systems are also available.

Bus-specific details, such as information on operation of emergency exits, on how to use the chassis suspension and the location of the driver rest area are also integrated.

The release of the new database has been preceded by extensive research, which revealed all relevant bus manufacturers. In the initial release, the first buses added to the database are those with alternative propulsion (e.g. CNG, hybrid, hydrogen) systems made by the major manufacturers. Over the next several months, more buses will follow, giving priority to the topsellers on the market.

CRS and iCRS standard edition customers will get the new database at no additional cost through the online-update function. For new customers, the bus database is automatically included.