Compressed air foam systems (CAFS) have their adherents and detractors, but few people doubt the effectiveness and efficiency of CAFS when dealing with wildland fire situations.

Larry Segreto, vice president of Boise Mobile Equipment, says BME has been installing CAFS units on Type 3 wildland engines for some of its customers. “The Surprise (AZ) Fire Medical Department had us build a Type 3 wildland pumper with an Odin Derringer 110-50 CAFS unit on it,” Segreto points out. “We work mostly with Darley when installing CAFS and usually in the range of a 24-horsepower (hp) to 35-hp unit. Customers also like the Odin Kubota Mustang 100-50 CAFS unit.”

Jason Darley, North American sales manager for W.S. Darley & Company’s pump division, notes the Odin Derringer 100-50 CAFS has a Darley 1-1/2AGE single-stage centrifugal pump and two 1½-inch independent CAF discharges and is designed to provide up to 130 gallons per minute (gpm) and pressures up to 170 pounds per square inch (psi). “It has a rotary screw air compressor with an Odin AutoBalance™ valve, a compressor temperature alarm, a FoamPro Model 1601 foam proportioner system, and FRC water and foam level gauges,” he says. 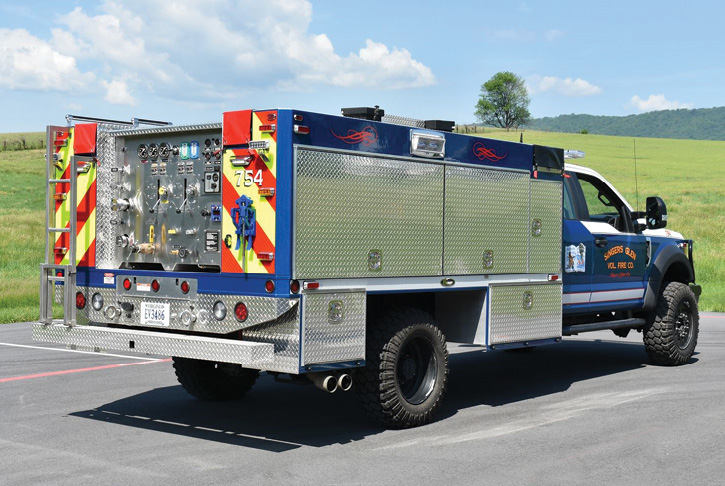 Carothers notes that in addition to Darley’s Odin Derringer CAFS for pump-and-roll applications, it also makes the Hornet, Mongoose, Weapon, and Cobra models. “The Mongoose and Weapon, like the Derringer, have two CAFS discharges, while the Hornet has one and Cobra three,” he says. “The Mongoose shaves 450 pounds off the Derringer package with a little bit lighter compressor and much lighter engine put into a smaller package. The Weapon and Cobra are quick-attack units and have a significant size pumping system, often installed on International Navistar 4×4 or Freightliner M2-106 chassis set up for wildland use, such as those used by the South Dakota Division of Forestry.”

Gregg Geske, director of sales and marketing for Waterous, says that wildland firefighters like to use CAFS because it gives them better reach with lower pressures. Geske says Waterous makes the 70-35-GP, a slide-in, portable CAFS unit that simultaneously delivers a minimum of 70 gpm of water at 100 psi and 35 cfm of air at 100 psi, at a CAF discharge pressure of up to 130 psi to a single discharge. He notes the Waterous 90-45-DS model can deliver CAFS to two discharges but not simultaneously, running 90 gpm at 100 psi and 45 cfm of air at 100 psi.

“The Hercules Easy CAFS Electronic Valve Controller offers option presets for wet, medium, and dry CAFS consistency, and the In-Line CAFS Mixers allow the user to achieve optimal CAFS consistencies with shorter hose lengths,” he adds. The Hercules CAFS is offered in 30-, 60-, and 70-gpm options and is available with 2-inch and 2½-inch outlets, Van Daalwyk points out. 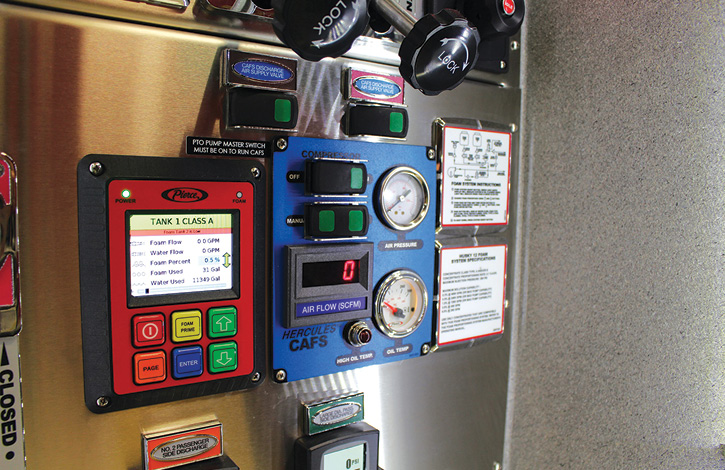 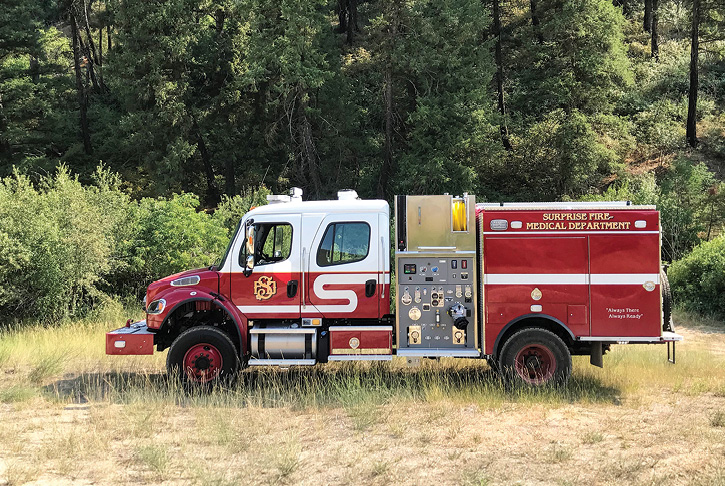 Jeremy Foxx, Hale’s product manager of foam and CAFS, adds that Hale offers a compressor system in the United States that delivers 200 cfm at up to 150 psi. “It’s available on the Q series, QMax, Q2, QMax XS, and DSD pumps, with a minimum of 500 gpm and up to 2,250 gpm,” Foxx says.

Dave Durstine, vice president of marketing for IDEX Fire & Safety, adds that Hale is seeing CAFS used a lot against wildland fires in Texas and used as a pretreat situation in fine fuels in the Midwestern states. “Dry CAFS has the ability to impact the fire and create a better hold time as a fire break,” Durstine observes. “And with CAFS, the hoselines are lighter because of the greater volume of bubbles in the line, making it easier to handle and move.”

Dave Mahrt Sr., president of Kingsway Industries Inc., says the typical CAFS units his company sees installed on wildland engines are the TRI-MAX 30 and TRI-MAX 60 Skid CAFS. “The Tri-MAX 30 units have gone on a lot of Type 6 engines over the past 20 years,” Mahrt points out, and can fit on the back of a wildland utility terrain vehicle and even in some heavy lift helicopters.

Mahrt says another favorite system for wildland rigs is the TRI-MAX SUPER-200 “that’s capable of producing a staggering 4,000 gallons of finished foam product. It’s engineered to fit in the back of a full-size, one-ton pickup truck or trailer and is outfitted with 100 feet of 1-inch booster hose, 100 feet of 1½-inch collapsible hose, and a 1½-inch deck gun,” he says.

Doug Feldman, western region manager for Rosenbauer, says Rosenbauer builds the NH pump in the 500- to 600-psi range, which creates a CAFS-like foam when used with a Rosenbauer foaming nozzle and is often found on its Timberwolf wildland engine line. “While we don’t see a lot of CAFS on wildland trucks, with straight foam being the predominant product, we just were awarded a contract with the U.S. Air Force for their wildland rigs where they have the option to select CAFS for their Type 3 wildland engines,” Feldman points out. 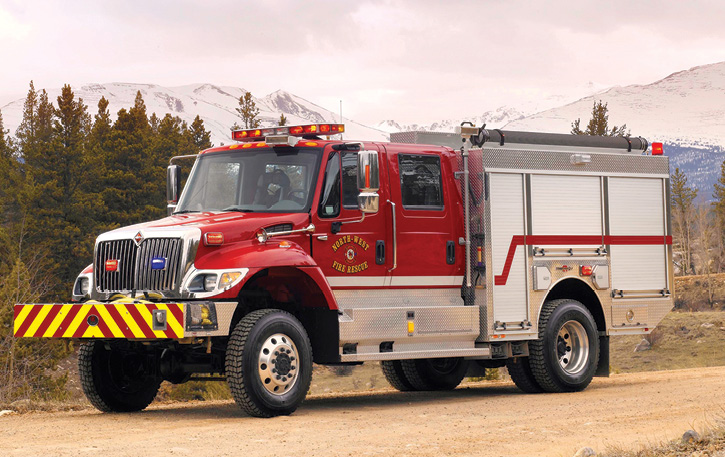 5 Rosenbauer built this Timberwolf wildland engine for North-West (CO) Fire Rescue that has a Rosenbauer NH-1,250-gpm pump capable of pumping at normal and high pressure simultaneously and making CAFS-like foam at 600 psi. The rig has a 750-gallon water tank and a 30-gallon foam tank. (Photo courtesy of Rosenbauer.)

Feldman notes that the Rosenbauer NH pump, which can pump simultaneously at normal and high pressure, will begin being built in Minnesota later this year, although the pump also will continue to be built in Austria.

“In addition to the NH pump’s capabilities in forming CAFS, we also build the CAFS cube, a portable CAFS unit that can be slipped into the back of a Ford F-550 Type 6 chassis,” he adds.

Greg Blanchat, president of Blanchat Manufacturing, says his company builds its own CAFS to be installed on wildland engines. “Our CAFS unit has four segments: a pump, foam, compressed air, and CAFS control that is great for exposure protection and laying a blanket over grass to coat it and knock down fire so you can go after the hot spots under the foam blanket,” Blanchat says. The system, which he notes operates on the Bernoulli principle, consists of a fire pump, FoamPro 1601 foam injection system, VMAC rotary screw air compressor with 70 cfm at 100 psi, and Blanchat Accelerator Controller. 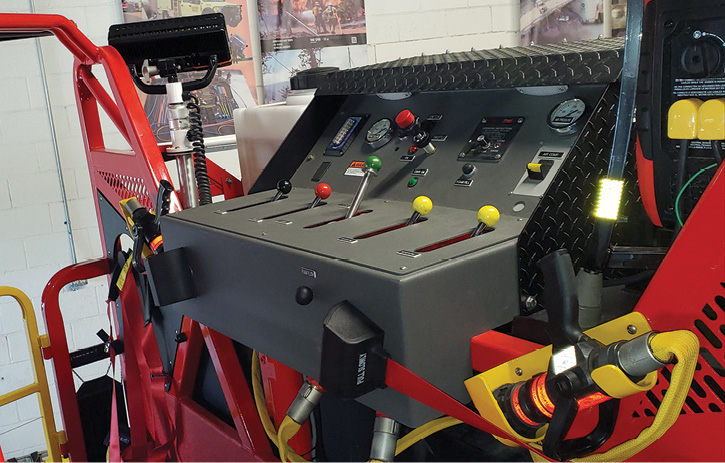 “The Blanchat Accelerator Controller is constructed of stainless steel with no moving parts to wear,” he says. “It has the ability to produced CAF without water and air pressures being equal and produces a smaller, more uniform bubble structure that allows for greater surface area for heat absorption, giving a thicker blanket for insulating and smothering effect.”