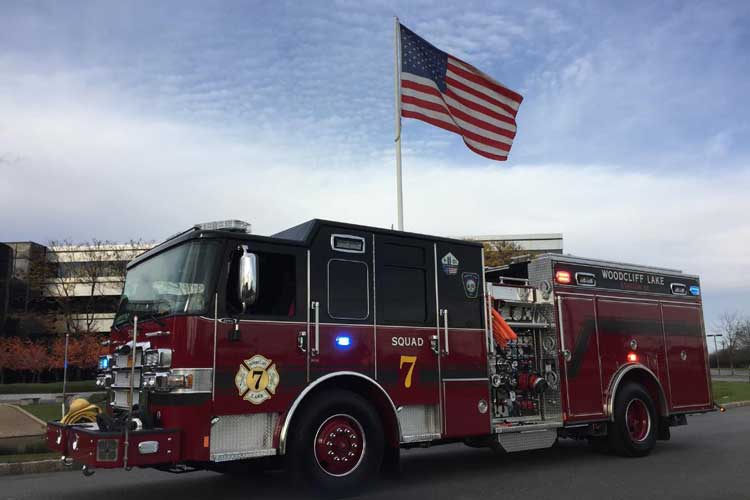 Woodcliff Lake, New Jersey, is located in northeastern Bergen County and is primarily a residential community that popped up on old historic farmland. In addition to beautiful homes and scenic suburban landscapes, the area is also home to some large corporate offices such as BMW of North America. Long gone are the farms that once provided area residents, visitors, and tourists from New York City with fresh apple cider and donuts along with other fruits and vegetables. The borough is named after the large reservoir which is in the town and runs into other adjoining towns. The fire department, like many other volunteer departments across the country, was created after concerned residents got together to form a local fire company for a community’s fire protection needs. In 1932, a specific resolution was presented to the mayor and council by the original members of the fire company that stated they were “to combat grass and brush fires.” However, upon incorporation, the purpose changed to read: “for the protection of life and property from fire.” In 1933, the mayor and council informally approved a resolution for its creation, which was during the depression. The company originally ran “Card Parties” to raise funds since money was hard to come by during these times. The parties raised $70.45, and that money was spent on the following supplies: 18 fire brooms, five Indian Tanks (and an additional one being donated) and 25 badges. Soon to follow, the members were able to purchase an old Dodge truck for $35; the deal was for $10 down and “$25 in a month or so.” The truck was built mostly with spare parts and had a 50-gallon water barrel on it, two Indian tanks and five fire brooms. In the months and years to follow, the department was able to purchase used apparatus from a neighboring department for $800. They were an REO Speedwagon pumper and chemical truck. 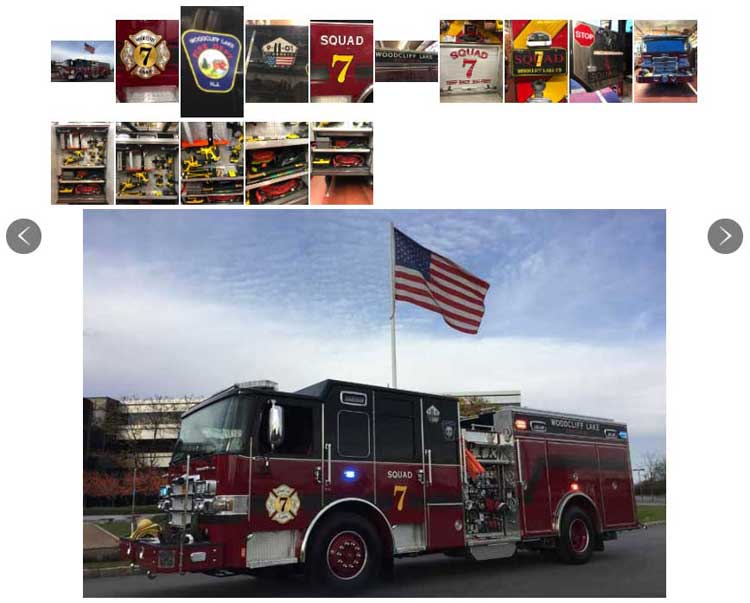 Luckily, the department has grown and has moved forward and isn’t operating out of a barn that members insulated and put gas heat in to house their rigs years ago. With the forward progress, the department recently acquired a 2016 Pierce Enforcer with a seven-person tilt cab with a 10-inch raised roof and aluminum body with hinged compartment doors. The rig is identified as Squad 7 and operates as Woodcliff Lake’s first-due pumper on all alarms. The rig is painted with a black-over-red paint scheme, including on the rear upper portion of the engine. There are three black reflective stripes—two thin and one thick—running along the lower section of the cab and then angling upward onto the upper portion of the rescue body. On the front cab doors, there are large department gold leaf Maltese Crosses, and on the rear crew cab doors is Squad 7 signage. Running along the upper portion of the rescue body in the black painted portion, gold leaf signage for “Woodcliff Lake” is present with Station 68 running under that. The apparatus is powered by a Detroit DD13 505-hp engine, and it has an Allison EVS4000 transmission. The pump is a Waterous 2,000-gpm two-stage pump with a 750-gallon polypropylene water tank. The apparatus also has TAK-4 independent front suspension and a Harrison MSV 6-kW hydraulic generator. For overall safety, the department specified equipment such as a Safety Vision 620 backup camera, which has a four-way guard around it to prevent damage to it. The mirrors are Retrac-heated and remote control mirrors with a convex section that assists the chauffeur during all driving operations. Another item was installed for scene safety: a Hi-Viz LED front brow light with integrated marker lights assists the firefighters at scenes with limited visibility.

The apparatus also has a Whelen light package that includes LED Freedom IV light bars, warning lights, directional and stop lights and rear rubber arm marker lights. For visibility off the rear, the rig has FRC SPA 900-Q70 LED recessed scene lights. Since the rig has numerous battery-operated tools, it is equipped with a 120 volt shoreline receptacle with Kussmaul Super auto eject. The painted front bumper is an extended bumper that has a Federal Q2B siren recessed into it as well as two Grover air horns. Its front intake is of swivel design and has one discharge for a hoseline.

The department also designed the apparatus with some other smart options, such as reversing the hinged compartment door directly behind the pump panel, so it swings away from the pump, allowing the chauffeur quick access to fittings, accessories, and tools. This concept is becoming more and more prevalent for engine company apparatus. There is also a backboard storage area running alongside the two crosslay hosebeds. At the wheel wells, the officer side has room for double air bottle storage while the chauffeur side has room for one double storage area. Above the pump panel, the rig is equipped with an Akron 3431 Hi-Rise Monitor with stack tips and stream shaper. Also mounted on top is a Hannay Electric cord reel with 200 feet of 10/3 wire. On the top of the rig, there is a coffin compartment on the chauffeur side and portable ladders are stored on the officer side, consisting of a Duo-Safety 24-foot extension ladder, 14-foot roof ladder, and 10-foot folding ladder. The only roll-up compartment is located on the rear of the apparatus, and the rear of the rig has the DOT safety chevrons affixed to it.

The right rear compartment is primarily the rig’s cordless tool compartment/forcible entry equipment and extrication assist compartment. It has three shelves with horizontal storage and a large vertical pegboard mounted onto the rear wall of the compartment. Looking at the rear wall, the upper left portion has a small two step folding ladder mounted to it, which is useful for vehicles on their side incidents. Mounted below the step ladder are two Dewalt cordless reciprocal saws. Mounted on the right side of the pegboard are the following cordless DEWALT tools: a drill, impact drill, circular saw and power grinder/cut off saw. Just below this pegboard is the small top shelf which stores a battery charger, spare batteries, and electrical pig tails. Stored on the top middle shelf are a set of irons with a Pro-Bar halligan married to a PIG forcible entry tool. A hydraulic rabbit tool, Scott RIT Pac II, Plug & Spill kit, and flares are also stored on this shelf. On the lower portion of the compartment is a DEWALT attachment case and a Blow-Hard electric exhaust fan.

Squad 8 is the “Pride of their Fleet” after the membership spent countless hours designing it and laying out the tool and appliance compartments. It should serve the citizens of Woodcliff Lake for years to come and help their firefighters operate safely and efficiently at fires and emergency scenes.

MICHAEL N. CIAMPO is a 33-year veteran of the fire service and a lieutenant in the Fire Department of New York. Previously, he served with the District of Columbia Fire Department. He has a bachelor’s degree in fire science from John Jay College of Criminal Justice in New York City. He is the lead instructor for the FDIC Truck Essentials H.O.T. program. He wrote the Ladders and Ventilation chapters for Fire Engineering‘s Handbook for Firefighter I and II (Fire Engineering, 2009) and the Bread and Butter Portable Ladders DVD and is featured in “Training Minutes” truck company videos on www.FireEngineering.com. He also writes the back page column ON FIRE in Fire Engineering.