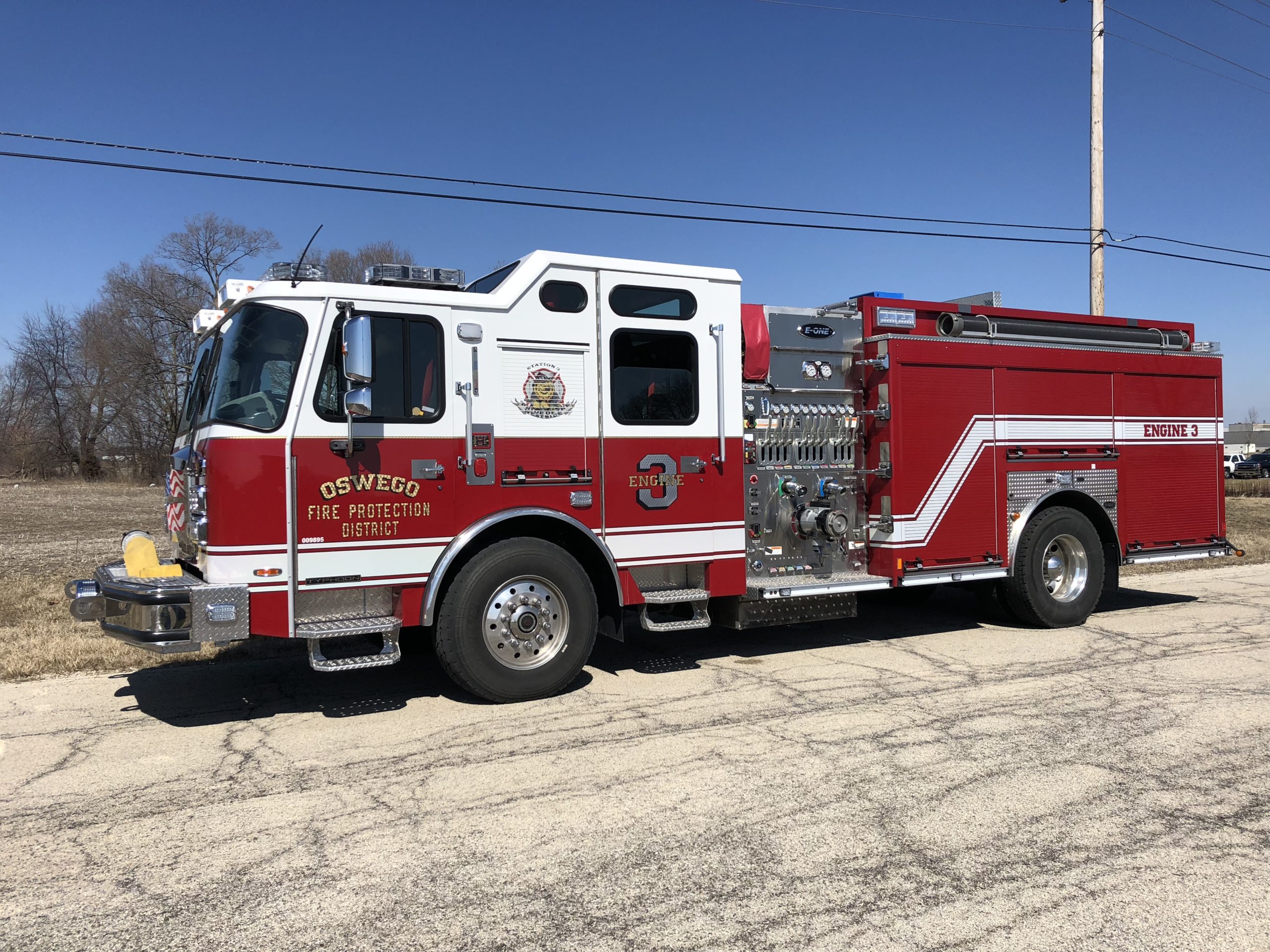 The Village of Oswego is located 50 miles southwest of Chicago, Illinois, in the northeast portion of Kendall County. The word Oswego comes from the Mohawk Indian name meaning mouth of the stream, since it located on the Fox River and mouth of Waubonsie Creek. The area was once known for its rural farmland but had a famous drag strip that featured muscle car races from 1955 to 1979. In the 1950s the area began to see significant growth to a suburban community with Caterpillar and Western Electric plants built nearby. The Oswego (IL) Volunteer Fire Protection District was originally formed in 1893 after a large church fire occurred, and its first hose cart was purchased in 1895. The fire district was formed in 1936 by voter referendum, and in 1986, ALS ambulances were in service. In 2008, the district hired full time firefighter paramedics, and now they operate out of four stations with a full time staff of 70 with some additional part-time firefighters. The area has a large mix of residential dwellings, from single-family homes to townhomes and condominiums, commercial strip malls, factories, and light industrial. It has three state and two U.S. highways as well as two railroad lines that run through its district.

Owego’s Engine Company 3 is the proud owner of a 2016 E-ONE Typhoon pumper. Its raised roof cab is painted white over red with the rear body having roll-up compartment doors painted red. The rig has three reflective stripes running low along the cab, then running diagonally upward on the first compartment door, and then running horizontally on the upper section of the body to the rear of the rig. The front cab doors boast the Oswego Fire Protection District signage in gold leaf while the crew cab doors have gold leaf and a large “3” embedded on them. The large “3” is unique because when looking closer you’ll notice its diamond plate design. On the smaller roll-up compartment on the crew cab, the unit’s logo is attached—Engine 3 is known as the Pride of the Westside. This logo is also on the upper section of the hosebed’s back wall. The front grill has a decorative design with the American flag painted on the grill. Just above the grill, Oswego is written in gold leaf. The rear of the apparatus has the safety chevron pattern on it and large reflective “E-3” graphics on the rear compartment.

The apparatus is powered by a Detroit engine and Allison transmission. It has a 1,500-gpm Hale pump and a 750-gallon booster tank. The pump panel has large chrome handles for opening the discharge valves. The extended front bumper has a large-diameter intake that stands out due to it being chrome. On the front of the cab, mounted above the front windshield, are two LED scene lights that provide sufficient lighting at nighttime incidents. The cab has seating for six firefighters—two in the cab and four in the crew cab. The rear of the rig has a low hosebed consisting of four separate storage spaces, and one bed is equipped with the RAM by Elkhart Brass for a quick fire or “blitz” attack line. The rear compartment has storage for the unit’s AMKUS hydraulic extrication tools, which are stored on a pull-out tray. 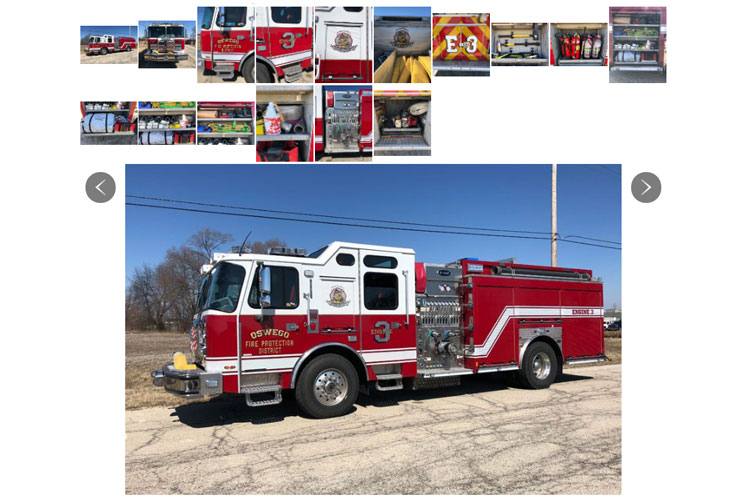 On the officer’s side of the apparatus, the crew has quick access to their hand tools and extinguishers when deploying from the crew cab. The first compartment behind the cab has the company’s forcible entry tools mounted in it. The unit’s primary set of irons are stowed on the shelf and held together with a carrying strap and has an aluminum wedge secured to its pike. The second Halligan is mounted on the rear wall with a pick-head axe and sledgehammer also attached to it. Stored in the bottom of the compartment are the unit’s spare SCBA bottles and fire extinguishers. The extinguishers carried include a dry chemical, carbon dioxide, pressurized water can, and a water pump can used throughout the area.

The rear compartment of Engine 3 on the officer’s side also carries an array of items. The compartment’s lower shelves provide access or crossover through the rig so longer items can be stored there. The upper shelves do not cross over because of portable ladder storage behind the rear wall of the compartment. The compartment’s lower pull-out shelf has the following equipment stored on it: the unit’s inflatable boat, standpipe appliance and fitting bag, and a gated water manifold. On the next higher shelf, there are four folded lengths of 2½-inch hose for standpipe operations, a rope bottle with utility rope and carabiners for performing the rope stretch, and two rolled lengths of 2½-inch hose stored on it. On the underside of the next shelf, are three tubes that allow hook storage to remain in the compartment and be protected from the weather and sit securely on the apparatus. The next higher shelf has two lengths of 1¾-inch hose that can be used for reducing down the standpipe folds and to increase the length of a hose stretch when needed. Alongside this hose is a blue utility tarp. Sitting on the top shelf, the unit carries another base for their deluge water appliance, utility tarps, and a box of hazardous materials collection pools used for minor gasoline and fluid spills at auto accidents.

Engine 3 is stationed in a neighborhood that is growing constantly. With their well-equipped apparatus, they are able to tackle almost anything that they are faced with. Their pride in the rig, tools, equipment and firehouse surely reflects their motto of the “Pride of the Westside.”