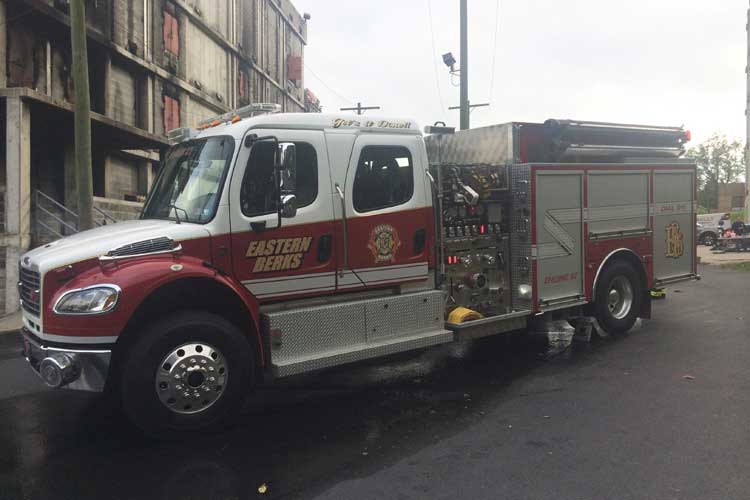 Berks County is located in southeastern Pennsylvania and is considered part of Pennsylvania Dutch Country. Through numerous federal and state highways, the county provides easy access to other major cities. The county is a combination of beautiful farm country, industry, and residential areas while being home to numerous colleges and universities. Eastern Berks Fire and Rescue Company 97 is located in the eastern section of Berks County, providing fire protection and mutual aid to numerous areas. Although formed relatively recently in 2011 when three legacy companies banded together, the department’s roots go much further back in time. Originally, the Goodwill Fire Company of Bally, PA, was formed in 1923 like many departments were—a destructive fire in a mill proved that a dire need for fire protection was needed by the community. A year later in 1924, the Volunteer Barto Fire Company, operating nearby in Barto, PA, was organized. And in 1916, the Keystone Fire Company No. 1 of Bechtelsville, PA, was organized. Like many reorganizations can be, there were many hurdles and obstacles to get through. But in the end, all three companies have come together for a common cause, and that is to protect their communities from the ravages of fires and assist the residents in any type of emergencies they may encounter. The Eastern Berks Fire Company may be relatively new compared with other departments, but its members’ dedication to providing the best protection they can remains something all departments strive for. The department’s apparatus surely assists them in providing this protection.

Engine 97 is a 2006 Freightliner chassis with a crew cab, and the body was manufactured by 4 Guys Fire Trucks located in Meyersdale, PA. That company originally started in 1974 when local men involved in the dairy industry began repairing stainless steel milk tankers. When the company began soliciting new investors, it shifted its business to building fire apparatus tankers. It was soon known as a premier builder on the East Coast of quality stainless steel elliptical tankers for fire departments. As departments relied heavily on this company, many of them asked why they weren’t building other type of fire apparatus, and 4 Guys decided to start building pumper and rescue trucks. Although its primary market is Pennsylvania, Ohio, New York, Virginia and surrounding states, 4 Guys has delivered apparatus as far away as California. 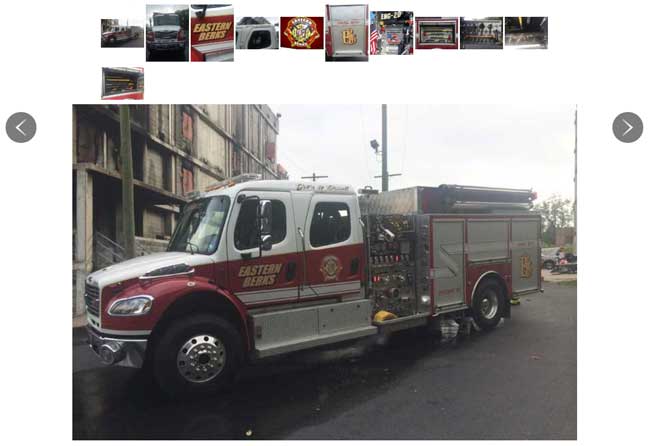 Engine 97 is painted white over red on the cab portion of the apparatus, the white continues down onto the front hood and grill area, giving it a nice sleek look. The front fenders and lower portion of the crew cab are painted red, as is the rear body. Running on the lower portion of the cab are three white reflective stripes for increased scene visibility. On the front cab doors “Eastern Berks” is rendered in large gold leaf letters, while the rear cab doors have the department’s Maltese cross symbol. On the upper portion of the crew cab, over the rear cab doors, there is a slogan written: “Get’s It Done!!” The rear body is equipped with roll-up compartment doors that are not painted. They also have a three-stripe reflective sticker pattern that runs low on the first compartment behind the pump panel and then runs higher along the other compartments. On the rear compartment’s roll-down doors, in the reflective stripping, it has “Dial 911” signage, and it also has a large unique Eastern Berks Fire Department gold leaf logo mounted on it. The symbol is the department’s initials intertwined to form the logo. On the rear compartment’s roll-up door there is a beautiful memorial tribute logo mounted, in memory of those lost on 9-11-01. The engine is equipped with a Hale Qmax 150-21L pump and a 1,000 gallon water tank. It has a FoamPro 2002 system, which is capable of using A or B type concentrate.

The Engine’s main hand tool compartment is located on the driver’s side of the apparatus above the wheel well. It has two hinged pull-out tool boards that carry an array of tools. Once the roll-up door is opened, the firefighter will first be able to grab one of the five hand tools: two “D” handle pike poles, a flat head and pick head ax, and one of the handles to a Fire Hooks Unlimited’s Hook System package (a combination of four hook heads and two handles that can be screwed together for reach or for the type of head required, which allows engines with limited space to carry the equipment). When the release pin is pulled and the first swing-out board is allowed to exit the compartment, the back of the board has three hook heads and a Pulaski ax mounted on it. The fourth head, a rubbish hook, is mounted on the side of the compartment; because of its long tines, it can’t be mounted on the board. Next to the rubbish hook head, a broom head is stored vertically and can be easily installed on one of the system’s fiberglass handles. On the floor of the compartment, a Pro-Bar Halligan tool and the butt of the hook system is stored between swing-outs. On the permanent tool board attached to the rear wall of the compartment sit numerous hand tools: two pry bars, a flat shovel, two handles for the hook system, and a unique orange hook and demolition tool.

Engine 97 is equipped with numerous other tools and appliances on the apparatus. Recently the department took delivery of a 2016 Freightliner 4 Guys pumper that runs together with this engine. With the consolidation of all three departments, one can see that they are ready to provide protection in their communities for years to come.

MICHAEL N. CIAMPO is a 33-year veteran of the fire service and a lieutenant in the Fire Department of New York. Previously, he served with the District of Columbia Fire Department. He has a bachelor’s degree in fire science from John Jay College of Criminal Justice in New York City. He is the lead instructor for the FDIC Truck Essentials H.O.T. program. He wrote the Ladders and Ventilation chapters for Fire Engineering’s Handbook for Firefighter I and II (Fire Engineering, 2009) and the Bread and Butter Portable Ladders DVD and is featured in “Training Minutes” truck company videos on www.FireEngineering.com.  He also writes the back page column ON FIRE in Fire Engineering.

Out of My Mind: Lack of Interest in the Job?